In the 2007 version of the 1997 original, Funny Games takes the viewer on a psychologically thrilling and terrifying journey. The plot centers around two young men who keep a family hostage as they perform borderline insane acts of horror on each member.

Although entirely in Spanish, REC is one of the most horrifying films I’ve watched and I’m certain others will agree to this. With English subtitles, REC’s plot follows a news teams unfortunate adventure as they find themselves stuck in the middle of a horrific zombie outbreak. The visuals in this one are undeniably eerie.

It Follows will probably make you not want human contact with anyone, ever. The plot centers around some sort of deadly STD that is passed around and takes the viewer on each victim’s terrifying experiences as it tries to kill them.

A classic “family vacation gone wrong” tale. The Strangers focuses on a couple struggling to find survival from two masked murders who intrude their getaway. The couple is terrorized and (spoiler alert) end up accidentally killing one of their own.

House of Wax tells the story of a group of college kids who end up stranded at a ghost town because of a flat tire. They then have no other choice but to seek help from a creepy local wax museum. Although the plot is a bit predictable, Chad Michael Murray’s performance makes it worth watching, in my opinion at least.

An underrated classic. Rosemary’s Baby goes without saying. A young woman believes that her baby is demonic as they move into an ominous apartment with freaky neighbors. The plot follows the couple as Rosemary’s paranoia intensifies.

Eden Lake is a British horror favorite. It centers around a young couple during a weekend getaway ( yet again) that encounters a group of young teenagers that torture the couple into mania.

Because I was only ten when this movie came out, I wasn’t able to watch it without completely freaking myself out. Dead Silence focuses on the legend of Mary Shaw, a ventriloquist that was murdered and whose spirit haunts a small town. If you’re afraid of dolls, this one’s for you.

British film Triangle didn’t receive too many accolades upon its release in 2009. A group of people become stranded on a yacht as freakishly dangerous weather rises. They are then forced to board an abandoned ship with paranormal forces.

Turns out that the perfect family isn’t so perfect after all. You’re Next tells the story of a family that is trying to fight off a murder that intrudes their home wearing an animal on its head. 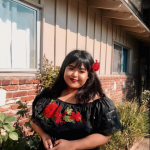