3 Short Must-Reads That Are Breaths of Fresh Air
Advertisement

Short stories are categorized as the underdogs of literature as they are often undiscovered, yet beautifully-crafted pieces of literary work.

Everyone needs a little break from politics and the cruelty of the world once in awhile, and short stories are the cure for people who enjoy diving into different worlds who have little time.

Here are some refreshing short stories written by Karen David, an upcoming college student from the Philippines, who takes pleasure in reading, writing, and taking pictures of anything that catches her eye.

THE FIRST HEARTBEAT: A RETELLING OF A FOLKTALE, by Karen David

The First Heartbeat by Karen David tells a tale about an eloquent boy named “Aric” and his estranged love story with a girl named “Skadi.” The two meet each other during winter at a great frozen lake, and it was love at first sight for the both of them; however, a mysterious disappearance of Skadi leaves Aric heartbroken. His love for her was too much to bear.

The short story was inspired by a picture of Lake Baikal in Russia and led to the creation of Skadi who was made from the image of the snow maiden.

THE LAST WORD, by Karen David

Karen David remembers all of the unfinished stories that she has written and the characters that they entail. The Last Word is the product of the unpublished, but unforgotten characters and how they must be upset that their story was never told.

The Last Word tells a story of a young author named Jamie who meets all of his drafted characters throughout his day. His estranged experience develops throughout the story but the end reveals a twisted occurrence of how one of his monstrous characters reveals Jamie’s dark past and brings him into the realm of death with him, just like how Jamie kills off the haunting figure in one of his more “out of the box” short stories.

Forgotten Moments is a descriptive short story that truly places the reader in clouds of love. Karen David uses a string of mellifluous words to tell a tale of a young girl who accidentally meets her dream guy, quite literally, in her dreams. The short story revolves around the phrase “Love is too good to be true” as the girl makes the most out of her short rendezvous with the man of her dreams, in her dreams.

Author Karen David was compelled to write the love story because she, herself, experienced a recurring dream of a boy who occupied her thoughts and the only way to set him free was to write about him.

The short stories listed above were very refreshing to read as they are unique in their own ways. “The Last Word” and “Forgotten Moments” open a world of paradoxes that gets the reader excited to further dive into the two different worlds created by Karen that are parallel to what our world looks like, but with different twists and unforgettable characters.

If you wish to get your literary works/photography/artwork reviewed and published by me, feel free to shoot me an email at alcarazcharlize@gmail.com

In this article:fiction, love story, short stories
Up Next: 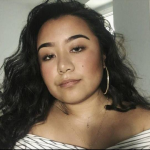 Charlize is a high school sophomore who aspires to be a journalist in the near future. She currently writes for Affinity Magazine and mainly covers articles about politics and feminism.