If there’s anything that 2017 has taught me, it’s that television watchers have every right to be critical and strategic in what shows they invest time and energy in. For many of us, the TV shows we love often reflect real-life situations that we can relate to. Unfortunately, this can lead to negative ideals or expectations about relationships, family life or love. Below is a run-down of several different shows that display and normalise despicable behaviour:

The first thing that caught my attention when it came to Riverdale, and something that the CW is notorious for, was the queerbaiting of its audience. The Betty & Veronica kiss that happened in the first episode of Riverdale was the centrepiece of the CW’s promotional material for the debut of the series. This lead to the idea that the CW was going to be including either Betty or Veronica (or both) in the LGBTQ+ community, and reeled in a bunch of viewers for that sole purpose. The kiss however, was quickly waved off as an attempt to get through the first round of cheerleading tryouts—because yeah, no homo, right? Another vomit-inducing story line that lasted way too long was the teacher-student affair that was a clear glorification of p*dophilia and statutory rape. Archie Andrews is a minor in the show, and is romantically involved with a much older teacher, Ms. Grundy. However, Instead of her getting punished according to the law, she gets a quick slap on the wrist and leaves town (The adult characters on the show didn’t even seem to care).

“…it is in poor taste and throws teenagers dealing with sexual abuse under a bus for ratings.” (Source)

Moreover, Riverdale completely erased the fact that Jughead is canonically Aromantic and Asexual in the comics. Sexuality erasure is a disgusting theme that many TV shows are guilty of, obliterating someone’s right to exist and see themselves represented in the media they support. Riverdale also glorifies incest between cousins and siblings, has several plot holes, and sidelines its black actors with no remorse. Ashleigh Murray plays Josie McCoy, the leader of the Pussycats, and is categorised as a main character. Yet, in several episodes Josie’s character is tossed to the side, and forgotten about. Nonetheless, The CW renewed Riverdale for a 22-episode Season 2, despite the fact that it lost over 21% of its ratings, and angered many people in the first 5 episodes alone.

Next up, is The 100. Now I have to admit, I used to be a fan of this show up until I realised how toxic this post-apocalyptic series is. The majority of The 100’s issues are stemmed from tyrant—I mean show-runner—Jason Rothenberg. Between the queerbaiting, violence against women and bad writing, the show also depicts several events of on-and-off screen bullying and vilifying of its black actors and characters.

“He was professionally bullying me, cutting out all the storyline I was supposed to be doing, cutting lines, cutting everything out, trying to make my character and myself as insignificant as possible.” – Ricky Whittle who played Lincoln on Jason Rothenberg’s treatment of him. (Source)

Lincoln’s death was one of the most heartless and utterly disgusting executions I’ve ever seen in TV. And was described by BuddyTV as “A terribly mishandled and disappointing death for a very interesting character.” Since, Ricky Whittle has moved onto American Gods, a show that is completely utilising his abilities and treating him better than the CW and Jason ever did. The 100 is also the culprit one of the biggest queerbaiting events in the history of TV. In Season 3, Episode 7, Commander Lexa, the lesbian warrior who was admired by many LGBTQ+ fans was a victim of “one of TV’s oldest gay cliches by killing her off mere seconds after she consummated her relationship with another woman.” This is a slap in the face to the many fans who were assured, by Jason Rothenberg himself, that they wouldn’t have to deal with another gay character’s death. The 100 seems to be using it’s post-apocalyptic world to justify its underlying racism, glorified colonisation, mistreatment of women and complete disrespect of the LGBTQ+ community.

13 Reasons Why was one of Netflix’s biggest original shows this year. At first, the series was getting high praise for the conversation it started regarding teen suicide, but as more and more people began watching, it was clear that this show missed the mark.

“It is unrealistic for someone, especially a teenager in the midst of an emotional crisis, to construct an elaborate series of tapes all the while maintaining a sarcastic, witty, and glib tone towards people she blames for her decision to end her life.” (Source)

13 Reasons Why completely romanticises suicide, making it seem like a solution for those dealing with depression, or another mental illness. The dramatisation of getting revenge on the people who Hannah (The main character) blames for her death is horribly toxic to those dealing with problems in the real world, and need real help. The show doesn’t really do a great job at preparing its audience for the triggering scenes of rape, suicide, self-harm, and abuse, even with a disclaimer at the beginning of the episodes. “It’s also a great 101 on how to get it right and not screw it up. The blood gushing, which way to cut, how much water in the bathtub – all presented as a suicide perfection manual to be followed.”   I found it disheartening to see how many young people immediately made excuses for the characters in the show and their vile actions, most famously the character of Justin Foley. I’ve said it once and I’ll say it again: if you think the actor is hot, show love for the actor, not the horrible character they play. PopBuzz’s words it perfectly by saying, “Justin Foley isn’t a character to feel sympathy for or to “protect”. Justin is a warning. He is what happens when you have no convictions…” 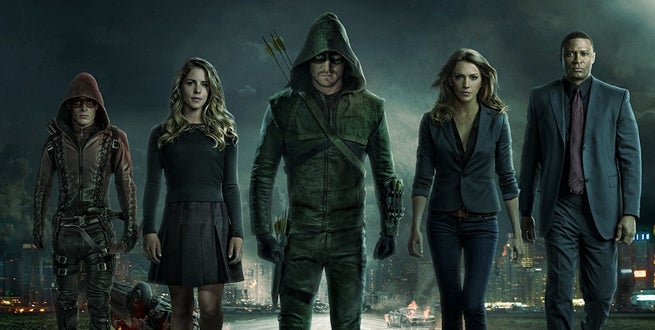 Finally let’s discuss Arrow, another show on the CW network (sensing a pattern here?). This was also a show I was once a fan of, until the “…DC’s TV universe spiraled into an incoherent jumble of nonsense, stupidity, and pure bullsh*t.”

Arrow completely blew it for me the second they started forcing Olicity down the viewers throats. Not only did they reduce badass computer genius Felicity Smoak to a bumbling mess of whines and arrogance, they started treating all of their female characters like dirt. More specifically, the character of Laurel Lance was a huge victim of Arrow’s misogyny.

“Arrow, a superhero series that has played too fast and loose with its comic canon, has tarnished and disrespected Black Canary’s character and legacy.” (Source)

Laurel Lance was a character who was a successful lawyer dealing with substance addiction and was one of the most developed characters on the show. This didn’t stop Arrow from killing her off for mere shock value.

We have to remember that fiction reflects reality, and the actions of characters onscreen have a mirror effect in how people condone certain behaviour in the real world. Stop giving your favourite shows a pass and start looking at the facts.