5 Black Mirror Episodes That Will Blow Your Mind
Advertisement

One of the most popular trending shows this past year has been Black Mirror.

The world we live in today is ever-changing and filled with new ideas and technology. Black Mirror takes these concepts and amplifies them, showing us what the future might be like if we continue our progression — and destruction. Each episode follows different characters in a different story. It is reminiscent of a modern-day Twilight Zone. The episodes make you think, some leaving you saying, “what the hell did I just watch?”

After watching the whole series, these are the five that have truly blown my mind:

“Nosedive” is the first episode of Season 3. It follows the main character, Lacey Pound, in a world where people are obsessed with their image. Each person has a rating. People can rate you from one to five stars based on your actions or what you post on social media. Two stars and below makes your overall rating decrease while getting a three, four, or five-star rating will raise your rating.

Your rating determines almost your whole life. Things like your job, events you go to, and where you live all are affected by this rating. Acting like a perfect society member is a perfect way to raise your rating, while for example, swearing or cutting someone off in traffic will hurt your rating. In this episode, Lacey is struggling with trying to raise her rating. We see the extraordinary measures people will go to in order to be liked and have a good reputation. I was mainly affected by this episode because I could see something like this actually happening in our future — as if we already aren’t over-obsessed with social media and others’ perceptions.

“Arkangel” is the second episode of Season 4. The concept of this episode really got to me, because I don’t think we are very far off it. The episode is about a young girl named Sarah and her mother. One day, Sarah’s mom almost loses her at a nearby park. She becomes scared of the possibility of losing her for good one day, so she decides to take Sarah to Arkangel. Arkangel is a company that places a tracker in a child and allows the parents to monitor (and even filter) where they are, what they see, and what they hear — basically their whole life.

Throughout Sarah’s censored life, she becomes desensitized because of how much she’s being protected from. She isn’t really living. The end really takes a twist and you see the effect of being overly protective of children.

The final episode of Season 4, “Black Museum” starts off eerily showing our nameless main character driving alone in the desert. Her car has run out of charge (yes, charge — it’s the future) so she hooks up her solar-powered charger and sees a museum in the distance. She walks toward the ominous building and is intrigued by the way it seems so empty. She is greeted by the slimy Rolo Haynes, who is the owner of the museum.

He offers to give her a grand tour of the museum and she cautiously accepts. The museum is filled with relics of his past job as a neuro-technology salesman. Everything from a toy monkey to a brain helmet. The episode takes a dark twist and the ending will truly make you question who you can and cannot trust.

In the first episode of Season 4, Robert Daly is living a typical, boring life. He is a co-boss at a video-game company but feels like second class — mainly because the other co-boss steals the show and disparages Daly at every opportunity. Robert struggles to find happiness as his workers treat him with little respect. The only thing he enjoys every day is going home and hooking up to his virtual reality game (the same video-game that he works on at his job, but with some special — and creepy — modifications). He can quite literally put himself into another world and do whatever he wants to whomever he wants. No limits. I don’t want to give too much away, as this episode is very good, but let’s just say you never know what people are capable of — and how twisted they actually are in their head.

All the way back to Season 1, “Fifteen Million Merits” takes place in the future where we have completely converted to renewable energy. Most of society is required to cycle to power everything. You also have to cycle to earn a currency called merits. The only way out is to compete on different reality TV shows and hope to win. If you win, you are free from the slave-like life of cycling. The only problem is that tickets cost fifteen million merits, and you have to use merits to buy things like food, everyday essentials, and entertainment. You will see the main characters, Bing and Abi, struggle to try and survive the nightmare they endure.

Black Mirror is truly a great show. The episodes don’t need to be watched in order because they are all independent. If you are thinking of trying it out, start with these five. You definitely won’t regret it!

‘Everything Sucks!’ About Its Actresses’ Whopping Age Difference

We All Want A Relationship Like Malec’s From ‘Shadowhunters’ 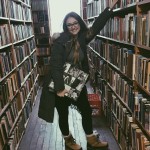