Before 23-year-old indie-pop artist, Claire Cottrill (Clairo) stepped on stage, it was clear that despite the thousands of audience members crammed into the balconies of Boston’s House of Blues, the concert would be an intimate one. Grips and roadies draped ornate rugs over the stage and placed abstractly-shaped lanterns among instruments. As the stage lights were dimmed and the lanterns ignited, Clairo sat down at the piano as if preparing to play in her own home. Launching into “Bambi,” the first track off her sophomore album, Sling, Clairo was comfortably at home, in more ways than one. 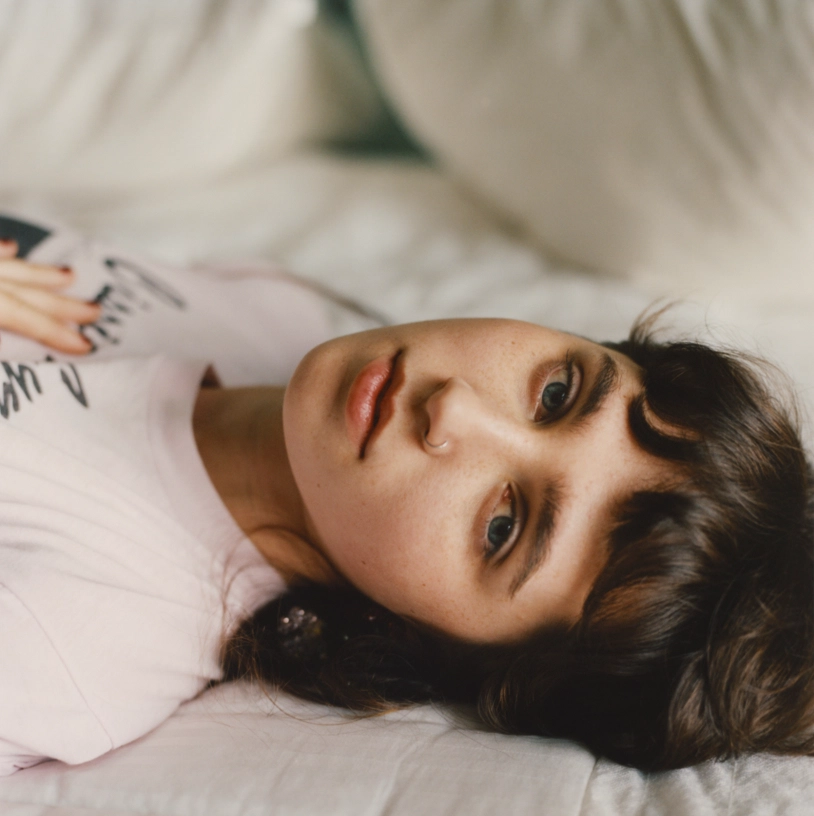 “I grew up outside of Boston. This means the world to me, I went to so many shows in this venue,” Clairo said between Sling songs “Zinnias” and “Wade.” Growing up in Carlisle, Massachusetts, Clairo went to one of her first concerts at the renowned House of Blues. For the two nights of February 27 and 28, while on her Sling Tour, she felt the love of her home crowd. It was only fitting that she perform at her childhood venue to kick off the second week of her new album tour. Sling was released on July 16, 2021 and Clairo began her tour seven months later.

As a whole, the set paid homage to the depths of Clairo’s discography. While she devoted the first three numbers to Sling, Clairo also incorporated tracks from her debut album Immunity. She moved seamlessly between the piano, acoustic and electric guitar, the longing evident in her voice as she sang “North” and fan-favorite “Bags.” Switching back to a Sling track, Clairo followed with “Harbor” before continuing her ode to Immunity with performances of Boston-inspired “Alewife,” “Impossible” and “Softly.”

Jumping back into Sling with “Blouse,” the seven-piece band really shined. Unlike the evident bedroom-pop influence on Immunity, Clairo incorporated more classical elements into Sling, representing her maturity as a songwriter and composer. Soaring flute solos and stretches of saxophone give her latest album an element of whimsy while still highlighting the guitar riffs and bass lines that defined Immunity.

From “Just for Today” to “Little Changes” to “Partridge,” unreleased track “Nomad, “Reaper” and “Joanie,” Clairo’s calming yet soulful vocals were on full display. Some believe the quality of a musician can be determined by comparing their live performances to recorded tracks. In this case, Clairo scores all the points. It is always satisfying as an audience member to hear a vocalist sounding just as good live as they do on the finished track. Clairo exceeded this expectation.

Clairo and her band picked it up with a Sling favorite “Amoeba” and “Management.” Straightening the Boston Red Sox cap she’s had since middle school, Clairo expressed her gratitude to the fans before announcing that the band had two songs left.

The energy was palpable, expanding to all three floors of the venue. Audience members in the mezzanine leaned forward on the railings while others on the floor brandished pride flags and seemed to surge forward, gravitating towards the stage. As the beginning words of single “Pretty Girl” echoed through the hall, the crowd lost it. Clairo originally released the track on YouTube in 2017, before she officially signed with the label Fader.

“Pretty Girl,” which first launched Clairo to stardom, is simplistic in its composition and simultaneously profound and blunt, lyrically. The audience chanted along, singing, “I could be a pretty girl/Shut up when you want me to…I’ll lose myself in you” The second half of the song was notably more chaotic in the crowd when someone launched a burgundy bra at Clairo from the pit. Doubled over in laughter, the singer let the crowd carry the remainder of the song.

Before beginning her final song, Clairo delicately hung the undergarment on her music stand, complementing its owner on their throwing arm, jokingly saying, “You should play for the Red Sox.” It’s moments like this that showcased the true personality of Clairo, a young woman putting her unfiltered self into every piece she creates. After reiterating how loved she felt while on stage, the band geared up for the final track, which needed no introduction.

As the famous electric guitar riff pierced the air, hundreds of voices joined in singing “Sofia.” Through the entire night, the Boston crowd chanted, “Sofia, Sofia, Sofia!” begging to hear the sleeper hit turned TikTok sound that charted on Billboard’s Top 100 in late 2020. When it was finally time to perform it for fans, Clairo swayed and danced across the stage, reaching out to the audience as if paying homage to their dedication. As the song’s final chord sounded and the audience cheer became deafening.

Clairo will continue her 2022 Sling Tour for the rest of the year, closing with a show in London on October 4, 2022. Fans are hopeful that new music from the singer is on the horizon, as she continues to perform “Nomad” and other unreleased tracks.

Sling is available on all platforms — including Apple Music and Spotify — now.