“You know why your dad and I named you Lua, my dear?”

“No,” she whispered, wiping away her tears with the sleeve of her sweater. Her father kneeled in front of her and held her hands. Her dad’s hands were warm, like when someone is holding a cup of hot chocolate kind of warm. He gave her that look she always hated — the look of guilt. She hated that he felt this way; it wasn’t his fault her heart held too much, and she didn’t know how to handle it.

“You are much like the moon — everyone needs you and you have been a part of their life, one way or another. You make oceans rise and fall, and even though you don’t have the heat of the sun, you still shine so brightly. You haven’t been shining lately.”

He was right, she thought, as she leaned her forehead against his and closed her eyes. She had been hesitant in telling him about what she had been thinking about these couple weeks — how do you tell your dad that you’ve been thinking of getting therapy or at least admitting yourself into a mental health hospital?

Everything lately just felt too much, and she realized she wasn’t happy with herself. She didn’t want to kill herself, no, she just wanted to pause on life and catch up. Her thoughts had felt like too many and went by too fast lately; they were always spiraling. It felt like she had a small flame in her body that grew, and grew, and grew, until she reached a point, where she wanted to scream for it to stop. Her dad understood that, he told her his own nightmares and experiences.

“Tú és a minha vida inteira, minha filha (you are my whole life, my daughter). Your dad would agree too, and we want our little moon back. If therapy is what you need, we got you.” If she was to be compared to the moon, her fathers were the stars. Without the stars, her sky would be empty and sad, and they always made everything better.

In this article:fiction, portuguese
Up Next: 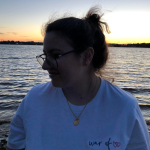