A Poem For the Tired Arms Holding Picket Signs
Advertisement

I write this poem in a poetry class I took in university recently. My professor and many students were overcome with grief about the mosque shooting in Quebec City that took the lives of six men in January of 2017. My professor, a poet herself, assigned us homework for the week: to write a poem, in any form, that took a political stance or a position of advocacy.

The beauty of poetry is that it, through mere words, the author can evoke or stir the emotions of the reader and change their perspective. Beautiful and awe-inspiring poets such as the late and great Pablo Neruda and Adrienne Rich used their poems to communicate and get readers to understand the injustices that they saw in the world. This poem is my feeble attempt to do just that and is dedicated to the families of the men that lost their lives on the evening of January 29, 2017.

A Poem For the Tired Arms Holding Picket Signs

I am polarized walking a tightrope between two realms of privilege and oppression.

I create myself separate from my contradictions and offer open hands to siblings of different ancestries,

with whom I weep as our hearts synch up and break to the tune of political symphonies.

We bear witness to coloured corpses shrouded by professed augmented elegies spouted by vapid patriarchal tyrants hiding behind the facade of their martyrdom.

It seems that all they can do is spit hateful polemics on “How to Make a Country Great Again” to crowds of glazed over eyes and fearful followers,

all deaf from their blind hatred.

A fallacy with the most malicious of intents – how to make a country forged on genocide thrive once again.

Sometimes I feel small, as if all I can do is mutter “it’s all gone wrong” as these egotists take up arms drawing lines to separate you from me,

but our hearts still beat the same and with calloused, compassionate hands we work hard to smudge their barriers.

It is all we can do.

In this article:poetry, politics
Up Next: 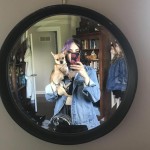 Alanna is an 18 year old feminist and psych major who, contrary to popular belief, is rarely angry (unless it comes to social injustice) from Toronto, Canada. She is usually found listening to music, writing crappy prose or reading a horror novel.