Pop culture’s most anticipated bundle of joy has arrived. On May 13, Rihanna gave birth to a healthy baby boy with boyfriend and rapper A$AP Rocky in Los Angeles, California. The singer was spotted just days before, on May 8, in one of her numerous, bold maternity looks. The soon-to-be mom was decked head-to-toe in crystals and fur.

The news of the baby being born came nearly a week after the day of his birth, and just days since the couple’s last public appearance. The internet quickly went into a frenzy, despite having little-to-no details.

The couple announced their pregnancy in January on a fashionable walk through Harlem, with Rihanna’s belly exposed and decorated with gem stones and pearls. It was quite possibly the biggest news in pop culture since they first confirmed their relationship at the 2021 Met Gala, wrapped in what seemed to be designer comforters. Since their candid baby bump reveal, the internet has waited eagerly for this announcement. The only calming fans’ nerves was the fashion icon’s maternity looks.

The billionaire musician has been regarded as a respected fashion figure for over a decade, but her style was only elevated by her bump. She didn’t miss a single opportunity to display her belly, straying far away from traditional maternity wear, which tends to be much less glittery and much more full coverage. The “Love on the Brain” singer proved that pregnancy shouldn’t limit fashion choices, but, instead, allow expecting mothers to explore more creative ideas that further display their bodies. We can only imagine she’ll be debuting some postpartum looks soon.

The couple has not publicly named their child yet, with the delivery also being kept a secret for the past week. Many were anticipating this day, though, as the couple were a no-show at the 2022 Met Gala. Instead, due to her late term, Rihanna appeared at the Met in the form of art, with a statue digitalized in her honor.

Though there has been speculation surrounding cheating rumors involving A$AP Rocky throughout the Fenty Beauty entrepreneur’s pregnancy, it seems as though the couple is currently overjoyed and taking on parenthood together. With the rumors being shut down by her stylist and footwear designer and with Rocky by her side in L.A., it seems as though the allegations are baseless.

Rihanna showed us that pregnancy can be fashionable and beautiful, not sterile and bland, or something to hide. We are positive that she’ll show us how creative she can be with motherhood, as well and can surely anticipate bejeweled baby bibs or maybe even a Fenty onesie line.

From her legendary music career, to her multi-billion dollar Fenty Beauty and Savage X Fenty lines, motherhood is just one of Rihanna’s numerous conquests, and we must say, it already looks good on her! 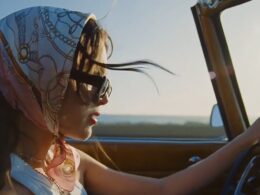