With all eyes currently shifted to the pop-rock band’s world tour and semi-recent album M A N I A, it seems that the world is forgetting all about Fall Out Boy’s past, more specifically their projects during their ‘break’ beginning in 2009 and redacted in 2013. The four members went in distinctive directions: Pete Wentz writing a book, Andy Hurley and Joe Trohman forming a band of their own, and Patrick Stump releasing one of the most underappreciated albums in the entirety of his music career.

“Soul Punk,” released on Oct. 18, 2011 via Island Records, combined Stump’s famous soulful voice with new and experimental instrumental styles that are “heavily indebted to Michael Jackson” (source) and very inclusive of a substantial amount of electro-punk, R&B and punk rock aspects. All of this album was written, produced and recorded by himself, which makes this all the more impressive. This 11 track album truly is a mixed masterpiece.

The album begins with a work titled “Explode,” which features an overwhelming amount of synth and extremely loud vocals, yet holds a buzz of excitement that sets the tone for the album. The lyrics express the intense stress one average person experiences at least once in their life, and they complement the musical value very well.

The second track, “This City,” was originally released as a single and is much more down to earth, featuring smoother electronic synth tracks, well-constructed rhythms, and wholesome lyrics highlighting Stump’s love and admiration of his home city, Chicago.

Arguably the most soul-inspired song on the album, “Dance Miserable” is a funky song dedicated to protesting against the ways and supporters of capitalism. It appears to be Stump’s way of sending a metaphorical ‘middle finger’ to America’s future direction.

Shifting gears ever so slightly, “Spotlight (New Regrets)” is an absolute banger with amazing electric bass usage and lyrics relating to how you shouldn’t let anyone else take control of your life except for yourself. Its catchy chorus, stating that “you could be your own spotlight/you could be the star, you could shine so bright” really makes this song a motivational masterpiece.

“The ‘I’ in Lie” encapsulates two different albeit very real narratives about lust, greed, and unfaithfulness. This song ironically features a highly sensual beat, as on the surface the lyrics seem to be telling the story of a married man partaking in an affair with an unmarried woman. But, according to Stump this song is also about “selling yourself out, [he] used the whole thing as a metaphor as selling out your virtues.” (Source)

“Run Dry (X Heart X Fingers)” and “Cryptozoology” are one giant eight-and-a-half minute song, but they have remarkably different themes and compositions. Tackling the issues of both alcoholism and broken promises, “Run Dry (X Heart X Fingers)” shares the story of a man going through an addiction to alcohol and his many broken promises he made to the people in his life about stopping his drinking problem. This song holds very funk-heavy musical styles, and is lyrically genius in all aspects. “Cryptozoology” on the other hand, is quite honestly my least favorite song on the album. The lyrical and musical value of this particular piece is sub par, as the instrumentals feel just slightly half-***ed and the lyrics and narrative aren’t the most clever on the album.

If you find yourself looking for another wonderfully upbeat song about more facets of capitalism and money-hungry people, than look no further than “Greed,” my favorite song on the album. This fast-paced bop really nails the mentality and negative characteristics of wealthy white collar workers and famous people. The drumline style of percussion with the melodious electric bass truly makes this song the catchiest and the best on the album.

Next up, we have “Everybody Wants Somebody,” giving us a lovely reminder of the feeling of unrequited love with the lyrics “Everybody wants somebody who doesn’t want them/Who want[s] somebody else, baby/You want somebody, oh, you want someone.” Showcasing Stump’s diverse musical talent, this piece features a horn-heavy hook and very prominent percussion.

By far the most sexual song on the album (as far as lyrical content goes) is “Allie,” a song describing Patrick Stump’s relationship with a girl who sleeps around a lot and his innocence during their time together. Stump’s vocals and impressive guitar riffs really paint the picture of regrettable naivety.

Finally, “Coast (It’s Gonna Get Better)” is yet another motivational song that Stump delivers. It touches on the fact that things are actually going to get better in your life, and institutes a message of hope into listeners.

Overall, I would give this album 4 out of 5 stars. Its lyrical complexity and musical competence make it a great work in its entirety.

To listen to this album and see updates on new projects, follow Patrick Stump on Twitter and Spotify at @patrickstump.

In this article:art, fall out boy, music, patrick stump, review, soul punk
Up Next:

Interview: Two Feet Wants You To Know He Is Not Just a Viral Hit 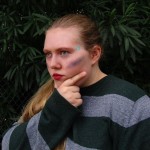