Anne-Marie Calls Out Theresa May In New, Controversial Song
Advertisement

Anne-Marie is an English singer-songwriter who recently rose to fame as the main vocalist on Clean Bandits’ Rockabye, which spent nine consecutive weeks at No. 1 on U.K. charts. She was also a supporting act on the Europe leg of Ed Sheeran’s ÷ Tour, and she was featured on four tracks of British-electronica band Rudimental’s album, We the Generation.

Although she is beginning to branch out to establish herself more as an independent musician, as of this year, she has released three singles — with “Then” being her most recent, and her other singles “Heavy” and “Ciao Adios” were released earlier this year — and they make her first solo music released since 2015. She is also embarking on a U.K. and Europe tour in March and April of 2018, and her new album is set to be released early 2018.

But yesterday, Dec. 20, she sparked some controversy when she posted a video to twitter of her singing a new song titled “Dear Mrs Prime Minister” — the song title is an obvious play on P!nk’s song “Dear Mr President.” P!nk’s song was an open letter to the current U.S. president at the time, George W. Bush, and it criticizes decisions made by Bush and his administration and topics such as the Iraq War, The No Child Left Behind Acts as well as his dislike for the LGBT community.

Anne-Marie’s video of her new song has now been viewed over half a million times on Twitter and has over 25,000 likes. In her newest piece, she repeatedly slams Theresa May with lyrics, such as: “We’re not one bit similar / So how’re you supposed to know a thing about us?” and “I don’t believe a word you say.”

She also slams Trump, saying, “And as for Mr President / It’s like World War III / And he don’t give a f**k. So much drama, people dying / Police shooting, children crying / You know? No, you don’t.”

But the song does end with a glimmer of hope:

“No, we won’t keep quiet / Nothing’s gonna frighten us.”

Girl Groups 2017: Recapping the Hits Made Around the World By Your Favorite Ladies 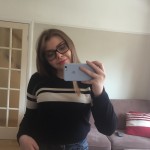