As the Stars Fade into Night
Advertisement

Ophelia sat in the darkness of her hollow room, the white sheets strewn wildly across her bed. A cold sweat dripped from the corner of her forehead, and slowly, she gulped. Her stomach ferociously growled, the edges of her eyes darkened and her glowing complexion faded to a ghostly, pale-white.

She was not the girl she was two weeks before this dawn.

I can see the rising sun, ascending from between the ash mountains slowly setting its course upward. Farther and farther it will go, and just as the dripping ball heat reaches its highest point, I will be wed and I will lose all relation I have with my blood clan. The Ashvire Clan will cease to exist, slowly dying and fading into the red sands of the Blood Desert.

But this was our fate, to slowly die and fade into the red sands.

Only now was I written out from this fate and given a chance at a life, compiled of brutal beauty and vengeful beasts.This was not the fate I chose. But this will bring my clan to its highest potential. Once the alliance between the Ashvire Clan and the Crown family of the Belfoure Kingdom commence, my clan will have access to each sea port bordering the Western front. Access to the sea ports would rewrite my clan’s fate, liberating them from the heat of the desert.

I toss the white sheets aside and plant my bare feet on the cool, tiled floor. The unseen tendrils of the shivering cold crawl up around my ankles, stretching up past my thighs and slither up my spine. The sensation drives my body insane. The sheer, white curtains billow in the tiny, cool draft, breathing into my room from the open terrace. I walk through the billowing curtains, my fingers trailing behind me, feeling every soft ridge of cloth.

Inhaling deeply, I look out into the small desert village. In this two story, cobblestone fortress, a gate encloses the Ashvire family to its people. The dust begins to whirl low, causing some early risers to pull their shirts over their mouths and with the sheer part of their hooded robes, they cover their eyes. Slowly in all its golden glory, the sun peeks up from behind the dunes of the Marren Mountains. It’s rays bleed into the village, slowly seeping through cracks of wooden doors and igniting the marketplace.

The rough cloth of our clan banner whips wildly in the morning winds.

The sun gives an offset, burning glow as if the hills themselves were aflame.

And the door to my bedroom bursts open, the sturdy wood doors clanging against the already crumbling marble wall. A rush of four handmaids, all wrinkled with age, with eyes filled with the memories of their past and my childhood, have prepared themselves for my day of Union. The unconventional settlement between the Ashvire and Belfoure clans bestowed by my father and agreed to terms by Raleigh Falk of Belfour, who was said to have grinned in the temptation of finally seeing the desperation in our dying clan.

They huddle around the bed, setting the silks of various colors, complimenting my golden complexion, to some resembling the dunes of Lumina, tanned gold from the low hanging sun. The head handmaid, Lady Meereen, places her hands on my shoulders, guiding me toward the plush velvet seat before the grand vanity. The maids pull and tug at my thick, wavy hair. Digging their hands through my dark strands, and I watch as my face contorts in pain through the age-stained mirror.

“Please take into consideration that I can feel, everything,” I sneer as Lady Meereen’s craning nails scratch at my screaming scalp. She smiles; her foreign tongue that I had grown to understand speaks, “A woman deserves careful precision.”

And as the smiling facade I had presented slowly cascaded into a glowering low-eyed expression of utter distaste, I sat at the center of the banquet, the sun setting over the glowing mountains of sand and falling rock behind the glass paned walls that decked the palace of Belfour. The paint smeared and splattered, carefully brushed across the glass illuminates from the last rays of the setting sun. The waves of carefully picked individuals, fake faces plastered in surprise clash and sway across the tiled floor. The calls of the two powerful names that hold the land of Granterra in its hands ‘of Belfour’ and ‘of Ashvire’ scream all the way into the night, from the villagers and grand power that hold the palace of glass- and I stand, carefully resting my body into the slowly setting night, excusing myself from the midst of the celebration of a loveless agreement for the betterment of my family.

Granterra at night masks the lies that fade slowly into the ageless sands. The billions of stars that embed themselves into the violets of the sky glitter as the blackness of the night slowly settles. And as I set my eyes up from these hands of mine gripped on the marble balcony, a smile slowly rests. The mountains of my childhood will always stay permanent in the landscape of a new perspective, both unsettling and glistening. 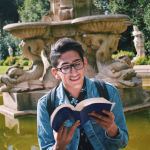 Andrew, incoming senior at Charter Oak High School, is the entertainment editor for The Bolt Live and the head of his own blog, Endlessly Reading. Andrew Barron has bright ambitions that include becoming a published Young Adult author -best-selling or not, it is still his dream. Andrew is addicted to both music and Twitter, and can not be seen without his iPhone, where he can usually be found either laughing over memes or becoming more socially aware by mass reading articles. Andrew is an awkward, nerdy and wannabe-angsty teenager who is currently juggling the IB program with hopes of getting into a good college.