Awkwafina's 'In Fina We Trust': Track-By-Track Analysis and Review
Advertisement

Much like her first album, the intro is a comical skit. Set in a New York City subway, Awkwafina encounters a “fan” who mistakes her for multiple Asian celebs, in reference to the “all Asians look alike” trope. The track ends with the line, “Who the f**k is Awkwafina?”

The title could be in reference to multiple things, one of which is that ‘cakewalk’ can be used when referring to how easy something is, and another meaning is that ‘Cakewalk’ is a name for a music production software. On this track, Awkwafina raps some pretty damn cocky lines throughout the song, getting her message across that people can’t badmouth her anymore. The beat is unique, consisting of distorted choir singing, stereotypical hip-hop drum beats and what I assume to be an organ. Awkwafina’s delivery and confident flow are what really make the song, dismissing her haters like it’s nothing.

‘Inner Voices’ is a conceptual song, comprised of a deep bassline and drum beats. This song is definitely striking, as Awkwafina raps in a split persona. In the verses, she really acts and plays into her role as a rapper, while in the chorus she speaks comically as her “inner voice”, thinking out loud and voicing random thoughts (often mentioning pop culture) while a slowed down, almost futuristic, melody in the background.

This is my favorite song off the EP. The title is in reference to ‘Pocky’, a sweet Japanese snack that is again referenced in the first line. Awkwafina delivers one of my personal favorite lines on the album with bold confidence, rapping,”I’m yellow as an egg yolk, so I’m getting side-eye from these alt-right white folk.” Lines like these are a trademark of Awkwafina, comical, witty and edgy. Throughout the song, Awkwafina makes many references to her Asian heritage and identity as Asian-American. She also plays with the idea of acting cocky and rich, all the while being broke as hell. The beat is catchy, the lyrics are catchy, and for me, it’s a definite standout.

Ghost is the most pop sounding out of all the tracks on the EP. In this track, Awkwafina raps about different men she’s had to ‘ghost’. The men she describes fall into multiple stereotypes of the modern man, one being a vegan, Vespa-riding hipster, another being a Penn State frat boy who loves cars and Scarface and the last one being a vaping hypebeast who wears skate brands but doesn’t skate. This is another favorite of mine, with its catchy chorus and beat.

This track is the most serious of the EP, going deeper emotionally and taking a step away from the assertive rapping, pop sounding beats and slight comedy on the other tracks. Awkwafina raps about her struggles and her ambitions, her yearning to be able to “make the city so proud.” This song is a little lackluster for me, but it’s a good way to end on a serious note.

A continuation of the intro, Awkwafina deals with and tries to defend herself from the angry stranger, who is extremely irritated and annoyed that Awkwafina isn’t Fan Bingbing as the stranger originally thought and that she “ruined her lunch”. The track ends with the same sentiment as what opened up the EP, “Who the f**k is Awkwafina?”

Satirical, fun, edgy, and self-depreciating, ‘In Fina We Trust’ is a damn good listen, finding a good balance on the line between comical and serious. It’s equally vibrant and sincere, much like Awkwafina herself. It’s a great way for her to return to the rap scene, and I’m definitely looking forward to more music.

Photo via Into the Gloss

Arctic Monkeys, My Anxiety and Me 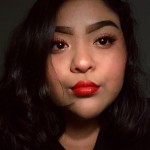