Belladonna: A Poem About Love In Infinity
Advertisement

This poem was something I wrote late at night, when I was looking through pictures of starry nights. The idea of humans returning to the stars after death is a concept that I have always thought was beautiful. Almost every element on Earth was formed at the heart of a star, and we all have stardust inside of us. No matter where you come from, or what you believe, we will all be with our loved ones at the last rays of the dying sun.

It was many and many a century ago,

in a forest by the sea.

A time when the trees had names,

and they all spoke down to me.

That was when I first met the maiden,

who sat alone and shared no thoughts.

Her clothes made from rags,

her hair a mess and tied in knots.

I spent my time getting to know her,

curious and curiouser I got.

We would talk, and laugh, and sing,

or go dancing among the rocks.

She went by the name Belladonna,

I thought the name suited her well.

The love between us, I began to feel.

She was the most beautiful girl I’d ever met,

I wanted to be with her until we died.

The last faces we saw, were each other’s,

before we were taken in by the violent tide.

The trees would speak of death,

of what was left for us.

They said you became the rot from the stars,

forever until the sun did not come up at dawn.

That was where my Belladonna and I were kept,

Our hands meeting in the hopeless darkness,

Keeping us together a velvet aura renders.

For eternity we would be together,

waltzing side by side in space.

Weightless and molding into a single orb,

a tight but tender embrace.

That is where we still are now,

My Belladonna and I always,

from the rot of the stars, we are light. 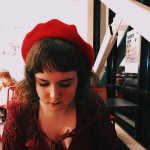