Benee Meets a “Monsta” in Her Latest Hit
Advertisement 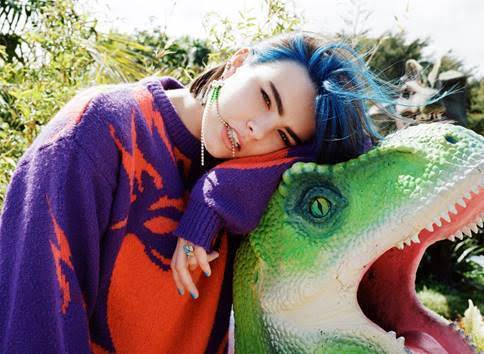 Benee is a powerful and popular indie artist making waves as she embarks across the United States on various tours. Hot off the heels of her latest song “Find An Island” (which you can read my analysis of here), she has dropped another hit: “Monsta”

The song “Monsta” opens with a steady snare beat before a winding guitar sound (reminiscent of Halloween music) is introduced. Benee then begins to sing about a haunting figure, “I’m tryna fall asleep/Something doesn’t feel right/A chill crawls up my skin/A tinglin’ down my limbs/A shadow in the night.My God, it gave me such a fright.I see him standing right outside/His face is red, his eyes are white.” Concern creeps into Benee’s voice as she ponders, “What is it that he wants from me?/Maybe he just feels lonely/What is it that he has in mind?/Why has he come here at this time?”

Light enters Benee’s crooning vocals as she discusses her experience with the monster. She sings about waking up in “a magic cave” singing about the beast offering her a blueberry instead of eating her, as she expected. She expresses possible sympathy for the monster, singing, “What is it that he wants from me?/Maybe he just feels lonely/What is it that he has in mind? Why has he come here at this time?”

Benee then explains sympathies for the creature, explaining its good intentions, “The monster walks me to a pot/It seems like time is all I got/He puts my head inside, I’m not ready to die/Instead of burning out alive, I see my room, flames rising high,” She tops the verse off with a beautiful run, singing, “He wasn’t tryna hurt me, was only tryna save me.”

“Monsta” is a lighthearted and fun song perfect for the post-Halloween season, when Benee released the track. Considering her typically intricate and deep lyrics, listeners would likely assume the content of the song potentially contains a deeper meaning. However, juvenile and lighthearted nature of the rhymes throughout the song suggest that the song is simply telling the tale of a kind monster. “Monsta” reveals Benee’s latest reported affinity for Arabic music, with its double harmonic scale. “Monsta” is winding, whimsical and wonderful.

You can listen to “Monsta” everywhere now.