I know writing this will only give you more attention and publicity, and I want to make it clear that that is not my intention but everything that I am about to say in this letter needs to be said. A little part of me does hope you see this, though, and I don’t think that’s too far of a stretch because as you know, crazy, and sometimes downright absurd, things have happened because of the internet (one of those things being your career).

I know you were at Rolling Loud in Miami this past weekend. So was I, not that I was there to see you or anything, I just know that you apparently “hosted” the event but that’s beside the point I want to make. The night before the festival started, you put out a tweet asking if you could wear a shirt that said “n*ggas lie a lot” to the first day of the festival (You deleted it but screenshots are forever). When I saw it, I was shocked for split second but not surprised because you’re the type of white woman who thinks that just because you hang out with and have sexual relations with black people, you’re entitled to that word and black culture as a whole so that’s expected from someone like you.

It’s equal parts funny and equal parts sad because, for a while, I actually admired and respected your come up but as you became more and more well known, I realized that you are nothing more than a white woman who stands on the back of black culture and makes a profit off of it. You’re also proof that a pretty face, a fat ass, minimal talent, and privilege can get you quite far in life. Splashing your face with water and pretending to cry on Snapchat after using a word that you KNOW you’re not entitled to use doesn’t make anyone feel sorry for you. It simply makes us laugh at your glaring stupidity even more.

The fact that you even had to ASK if you could wear that shirt is a clear indicator that you knew it was wrong but you obviously didn’t care (because, you know, you’re a privileged white woman). I’ve seen you do and say a lot of stupid things (like that one time you said you’re not white but, in fact, Italian and Puerto Rican (basically spicy mayo) who was raised by Colombians, where you proved that you’re an actual moron) but this takes the cake and you’re actually a lot dumber than I initially thought you were. You claim to be “for the culture” but from what I see, you pick and choose when to be “for the culture” when it’s beneficial to you and your brand. For you to use your platform to claim that you are “a part of black culture, have been a part of said culture since you were a child, and aren’t going anywhere” is a slap in the face to actual black people (on top of being a little Christopher Columbus-y).

It’s wonderful that you appreciate our culture as much as you do but at the end of the day, you need to stay in your lane and realize that you will NEVER be a part of the culture. What’s ours is ours and it will ALWAYS be ours — not yours to imitate and monetize. To be completely honest with you, I don’t understand how you think you’ve contributed to the culture in any way considering all that you do is show up to events and take pictures with rappers. You will never know what it’s like to be told that you’re “pretty for a white girl”. or you’re “white but not THAT white”. You will never know what it’s like to be in constant fear of your life simply because the way you look might not sit well with a police officer. You will NEVER know what it truly is to be black no matter how hard you try. You may think you’re making new waves but in reality, you just ride them the same way you ride bla… you know what? Never mind, I’ll be nice.

Good luck trying to make a career out of “directing the vibes” after this, and I mean that as sarcastically as I possibly can.

a black woman who sees right through you

Broadway’s Aladdin Kicks Out Autistic Child For Being “Disruptive” 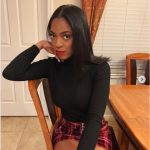