Diversity and Quality Rarely Correlated in Film Until 2018
Advertisement

Have you ever forced yourself to watch an entire show just to see a certain actress? That’s what finding representation in the media is like for minority groups. People are so desperate to see themselves on the screen that they will watch poorly written movies just to see an offensive stereotype of their self.

For years, there were few mainstream stories that included strong, diverse representation, whether it was TV, movies, or books. It seemed like every story had to involve a mostly white cast, with characters typically ranging from stereotypical cliché to white gay.

2018 has truly raised the bar for all forms of representation. We started the year off strong with Love, Simon, a mainstream love story featuring a gay protagonist and a black, Jewish love interest. It not only was well written and featured a diverse cast but also kept the soft, cheesy nature of a romantic comedy. We recently fell in love with To All The Boys I’ve Loved Before, a light-hearted, cliché-but-in-a-good-way teen romance featuring a half-Korean family, based off the novel written by Jenny Han, an Asian woman. And FX’s Pose was a gift to us all—a show with strong transgender and black representation written by transgender writers. And what do these all have in common? They’re diverse and have quality plots. 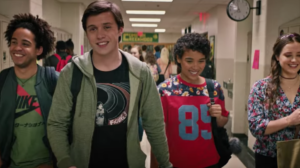 These new films are being praised so heavily because they provide more reasons than a character’s sexual orientation or ethnicity to watch. They prove well-written plots and good representation can coexist.

And what sets them apart from controversial shows and movies like Riverdale, The 100 and Call Me By Your Name? Unproblematic, quality stories that come with diverse characters as well. 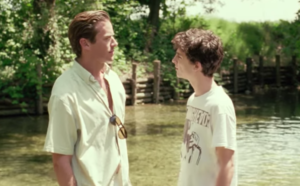 In Love, Simon, we see a healthy, blossoming relationship beginning to form between two teens, unlike Call Me By Your Name‘s unconventional love story between a teen and man. Though the gay love story had the potential to be beautiful, the questionable age gap between the seventeen year-old boy and twenty-four year-old man is the reason why this film missed the mark on healthy representation. And also, when will there be enough pasty dudes in love? I think we get the idea!

A major reason why these POC and LGBT+ characters are lacking depth is because writers focus all their arcs and personality traits on being a minority, or completely ignoring their identity as a whole. These characters become flat, which takes away from the plot and media itself. In Love, Simon, we get to see the protagonist’s humor and nerdy behavior, along with his gay identity. Neither aspects of him as a character trump each other. He is a well written, round character, which adds quality to the story as a whole. 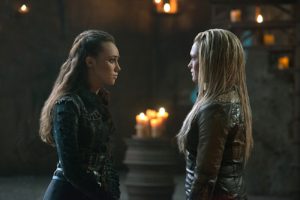 Photos via The CW, Bettina Strauss

The 100 has been praised in the past for its strong POC and LGBT+ representation, but what was seemingly overlooked is its treatment of those characters. POC characters were always used as a plot device, typically dying or becoming subject to abuse. LGBT+ characters typically received the same fates, which is what started the protest against this same trope in all media, typically known as the “bury your gays” trope. Films now steer away from that trope, seeing as it causes a major lapse in not only diversity but also quality.

And how could we forget the token, stereotypical characters? You hear a mainstream show getting amazing reviews and are interested in its plot. And it has POC and LGBT+ characters! Amazing—but too good to be true. Typically shows will introduce a character just to add to the diversity meter. Maybe they’ll throw in a gay guy to give fashion advice or a black man to say “Oh hell no!”. A perfect example of a token character is Riverdale’s Moose. He receives few lines besides boy advice and only is relevant when he needs to be gay. Essentially, token characters are sidelined until their stereotypical behavior is needed to enhance other characters. Token characters rarely receive an arc or any major plot point, and sadly, quality mainstream stories only include minorities as token characters. This shows that quality stories rarely focus on or even include diversity.

If a writer cannot produce a quality story that includes more than attractive white men, then as a writer, they are failing readers and viewers. Grossing 40 million dollars and ranked at the fourteenth most popular teen romance, Love, Simon was a huge success in theaters. Rated 92% on Rotten Tomatoes, it is also a success among viewers. In the category of Gay and Lesbian films, Love, Simon ranks significantly higher than Call Me By Your Name, also grossing ten million dollars more. The amount of love and good feedback being thrown at this new diverse media should indicate what direction we should be heading in.

I live in GA, USA. I am always creating, whether I'm painting or writing. I cover topics ranging from new music to political issues, with the occasional celebrity scandal thrown in there too.

An Analysis of the Victoria’s Secret Brand: Are They Diversifying, or Protecting Their Public Image?