A rainbow flag flies above the crowd at the Miami Beach Gay Pride parade on April 9th, 2017.
ShareTweet

The iconic symbol of the LGBTQ+ community is the rainbow, so I thought it was only fitting to photograph them in color film. Over the course of two days at the Miami Beach Gay Pride festival and parade, I used my Pentax K1000 and some Kodak Ultramax film to shoot street photography. These seven photos only reflect a small amount of the tens of thousands in attendance but were ones I thought showed some of the most interesting characters I observed.

A rainbow flag flies above the crowd at the Miami Beach Gay Pride parade on April 9, 2017.

He took a break from dancing atop the bar to flash the camera a smile.

A passionate pair embraces overhead on a moving bus.

A performer on stilts struts effortlessly down Ocean Drive.

A couple walks hand in hand while viewing various booths.

Both the crowd and the parade floats were populated with various ages, genders, sexualities, races, and religions, and despite a handful of hateful protesters, positivity radiated. The weekend was spent dancing on the boardwalk, waving rainbow flags, and cheering for the gorgeous people that surrounded us. I can’t name another time when I’ve been surrounded by such intense vibrancy and love.

The City Stuck in Time 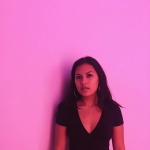