Finn Matthews is a passionate and driven singer, producer and songwriter hailing from New Jersey and chasing his dream in Los Angeles, California (read more about him here). Known for his hit “Julia,” Finn Matthews has been working on music that is meaningful to him for years. Now prepared to release his debut album, Sunny Daze, Finn has dropped the first track off the project – his latest song, “Into The Open.”

The song opens with gentle piano before introducing some light trap beats. Finn sings about feeling hurt, but still wanting someone to be with him. Even when he can’t smile or feel joy, “right now,” the comfort of having someone else with him is important. There is a pause in the trap before the piano gains more strength, giving more importance to what Finn sings, “I don’t believe we’re all hopeless / I don’t think anybody’s broken /I’m not saying that we’re all the same / But I think that people can change…”

Finn’s voice, layered so that it sounds like a chorus of angelic voices, begins to rise. Finn’s voice is highlighted during this point, emphasizing why he was identified as a promising rising figure at such an early age. He sings, “You took my hand/And pulled me into the open…”

The piano is covered by trap elements again, reminding the R&B nature of the track. He slightly raps, discussing growing from the pain of everything he’s experienced. Finn leaves the meaning open to interpretation, allowing the listener to project their emotions onto anything that they may be experiencing – heartbreak, political concerns, anxiety. The piano regains its strength in the track again as he sings, “Now I’m no longer running from the pain/That’s how I know people can change!”

Finn goes into an impressive run on change, as the rising chorus behind him makes it sound as though light is suddenly bursting all around him. He repeats, “You took my hand,” several times, as harp and chorusing voices swirl. The song ends, fading away, like sunshine turning to dusk. 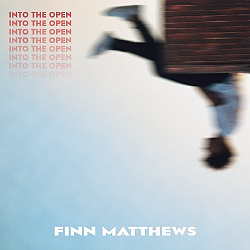 In a time of so much pain, Finn has created something hopeful and joyful. The song accepts the dark moments and points to the beauty waiting just ahead. Finn shared, “This song is about finding the best version of yourself through love. It’s also about understanding that you can always improve your outlook on life and your situation. I wrote this song during a transformative time where I finally began to accept myself and I want others to be inspired to love themselves and do what they love.”

You can stream “Into The Open” everywhere!