Classic novels are something adored by the elderly and despised by modern youth. Perhaps it’s the complicated wording, the extended length of most of these revered titles, or the fact that many classics are required reading for adolescents, but just do not appeal to most of the younger generation. However, some of these timelessly loved novels are quite different. They speak volumes about themes that no modern piece of literature would even dare to mention, and I believe that the youth of today should truly look to these fine spectacles when they are faced with doubt. This is what a classic is supposed to embody, and I have chosen four select “classics” that fit the bill excellently to share so everyone can cherish the messages that I have been taught from these works. Whether it be a lesson about coming-of-age, or a cautionary tale about the future of society, here are four classic novels you should read in your spare time this summer. Also, for a limited time, Barnes and Nobles is selling classics for $5 each!

Frankenstein was a book I never expected to like. I was required to read this novel as part of my Freshmen English curriculum, and despite the 19th century style of writing, I truly grew to love it. To give a short, spoiler-free synopsis, Frankenstein is about a rich man named Victor Frankenstein (yes, it’s actually not named after the monster). When he becomes of age, Victor is sent off to a university to study science and anatomy. He spends years stowed away in his room doing research on how to create the ultimate being. There, he gathers dozens of human organs, limbs, and more to ensure his experiment’s success. He eventually gives life to his nameless creation and the abomination escapes from his room out into the open world. The rest of the novel, Victor reflects on the terrible decision to create the monster that follows him and kills people along the way. The message from Frankenstein is clear: one’s decisions can follow them for the rest of their life, so one should truly decide wisely. Yet the modern media has misconstrued the story for decades, turning the truly powerful classic to a simple Halloween probe. Frankenstein is a must-read for those looking to see the origin story behind the abomination of legend, or for those simply looking for a classic novel to teach them a timeless lesson.

Originally written in Portuguese, The Alchemist is a spectacular coming-of-age story that teaches the reader about the beauty of chasing your dreams and finding the people that mean something to you in life. The story is based around the seemingly prophetic dreams of a young boy named Santiago. Santiago dreams of finding a treasure, and travels to a nearby town to find the meaning of his dreams. There, he meets an ancient king who speaks of a person’s “Personal Legend,” and how Santiago’s dreams are attempting to push him towards his own legend. Santiago sets off, falls in love, meets an alchemist, and eventually finds his treasure in a completely unexpected place. The Alchemist is filled with beautiful imagery as Santiago traverses different countries (where he sees both good and the bad). The message of a “Personal Legend” is extremely impactful on modern teenagers who simply don’t feel that they have a place or a meaning in the world. Everyone is different, from their looks and personality to their true reason for being a part of this world, and Paulo Coelho’s The Alchemist manages to teach and prove that message quite well.

Edgar Allan Poe’s poems have always been a delight for me to read. From the ever famous The Raven to the downright terrifying Masque of the Red Death, Poe’s poems are always readily available to give the reader a feeling that something’s looming over their shoulder. Poe’s poems recently became so popular there was a stage adaptation to truly capture the meanings of five of his most famous poems titled Shuddersome: Tales of Poe. If you’re interested in becoming a poet or looking for a novel to commence your reading of poetry, this compilation of Edgar Allan Poe’s classics is sure to get you hooked. Just make sure all your windows are closed first, unless you want to end up like the narrator of The Raven.

By: George Orwell
Recommended Reading Level: High School And Up

1984 is a classic I hold near and dear to my heart. I can discuss this book for hours because it piques my interest so much. “Classic” cannot even begin to describe this timeless piece of literature. This novel is not afraid to explore mature themes if it means better conveying a corrupt and unchangeable society. To give a brief summary, 1984 is centered around the rebellion of Winston Smith and his lover, Julia. They live in Oceania, reminiscent of modern-day England, where the government controls literally every aspect of its citizens’ lives. Everyone is being watched constantly through their televisions and other devices, along with the infamous Thought Police, a group of government law enforcement officers who will arrest and rehabilitate anyone who does not think the way Big Brother, the godly leader of Oceania, wants them to think. The ending to this novel is a surprisingly realistic one, and is definitely worth a read. Written in 1949, George Orwell predicted the future of world politics, and how the government uses technology to watch its denizens. Video cameras at every gas station, grocery store, and mall at every angle. Police officers patrolling every street, looking for a mistake to prey on. Is this the world of Oceania, or is it ours? The classic was even so powerful that it became one of the base inspirations for the dystopian genre, which includes titles such as The Hunger Games and Divergent. If you want a novel that’s realistic and sincere to the real world government problems, or perhaps just want a look at how dystopias got their start, 1984 is the classic for you. A Broadway adaptation is also in the works!

I hope you look into at least one of these amazing publications. They each taught me strong life lessons that I will never forget, and I hope by sharing some of my favorite titles you all will learn something grand as well.

How “The Female of the Species” Captures Rape Culture Perfectly

Why Kamala Khan/Ms.Marvel Is The Hero America Needs 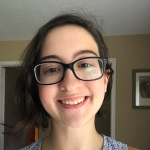 Maddie Loy is a current junior at a high school in Garland, Texas. She enjoys participating in theatre, drill team, and journalism on her own time. She plans to pursue a degree in directing theatre and a degree in journalism. She also wants to let you all know that IB stresses her out on the daily and that IB is a scam.