Guardians of the Galaxy Vol. 2 Examines What It Means To Be a Family
Advertisement

Warning: Spoilers for Guardians of the Galaxy Vol. 2 Follow

The first Guardians of the Galaxy was a fun adventure movie, but it also had something very real to say. As this video by Youtube Series Earthling Cinema helpfully points out, the first GotG was about what pain does to you when it’s internalized, and how sharing your pain with others can help you to heal.

Guardians of the Galaxy Vol. 2 looks to explore this theme further, focusing on how these characters both hurt and care for each other, and ultimately, what makes a father, a son, a sister, and a family.

I have to reiterate the spoiler warning here, because first I would like to discuss the most prominent relationship in the film, that between the hero and the villain.

Ego (2nd from right) talks to Peter (center) and the rest of the Guardians. [Yahoo Movies via Screenrant]

Peter Quill (Chris Pratt) spent the first film getting past the death of his mother and allowing himself to grow closer to his new family. As the second film begins, it seems like he’s in a good place, but he still yearns to find his biological father. Almost immediately however, his father finds him.

Ego seems perfect at first. He tells Peter that he’s heard about his amazing adventures, plays catch with him, loves all of Peter’s music, and to top it all off, is played by Kurt Russell.

Eventually, though, Ego’s constant encouragement of Peter starts to feel a little insidious. He shows Peter that he has godlike powers he can only use if he stays on Ego’s planet. He tells Peter he’s immortal, and continually implies that his friends aren’t important in the grand scheme of Peter’s life.

Like many abusive fathers, Ego is a master manipulator, and he presents his evil plan (to expand his consciousness as to envelop every planet in the galaxy) in a way the he knows will appeal to Peter. Ego shows Peter images of himself, clad in a cape, seducing alien women all across the galaxy, attached to no one, spreading his seed and power. It literally entrances Peter, and he only manages to snap out of it when he finds out the full extent of Ego’s abuse: he intentionally gave Peter’s mother cancer, killing her.

Peter is not the only character to deal with the ramifications of abuse. Gamora (Zoe Saldana) and Nebula (Karen Gillan), have their backstory fleshed out extensively. In the first film, Gamora managed to wrestle out of the control of her manipulate father Thanos , but Nebula remained loyal and the two came to blows in the climactic battle. Now, Gamora is hunting the fugitive Nebula, and distrusts her for most of the film. But even with the first movie’s backstory, it is unclear to us why the two sisters hate each other so much. 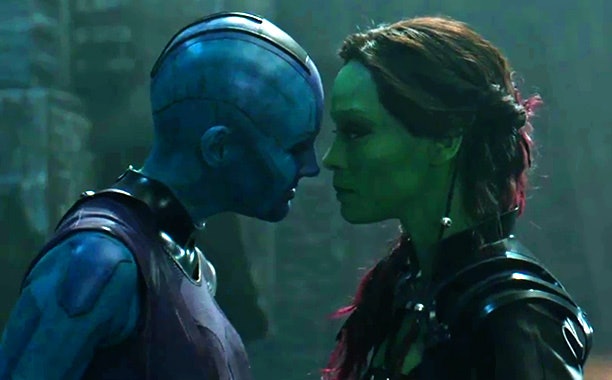 Gamora (right) and Nebula face off in this still from the first film. [Bustle]

It is eventually revealed that Thanos forced them to fight as children, and when Nebula would inevitably lose, Thanos would tear out parts of her body and replace them with robot parts, supposedly to keep her competitive. It’s a gut-wrenching piece of backstory and it becomes clear that Thanos used these battles as a means to get the sisters to hate each other, instead of hating him (as the recent scandal concerning Youtuber DaddyofFive suggests, this is a favourite tactic among abusers). As the story progresses, the two reconcile, and Gamora tells Nebula that she will “always be her sister”.

Note: In the writing of this article, another article was published that goes into more detail and makes the exact same comparison. I recommend reading it.

Drax (Dave Bautista), doesn’t have nearly as dark a story line, or as much screen time, but his relationship with Mantis (Pom Klementieff) also ties into the family theme. A running joke in the pair’s quasi-romance is that Drax thinks Mantis is ugly, and reminds her of this constantly. This joke seems strange and even mean at first, but once Drax delivers the rational for his bluntness, things become more clear. “You are horrifying to look at.. but that’s a good thing. When you’re ugly and someone loves you, you know they love you for who you are,” he tells her. It’s a great joke, and gets to the heart of what the series is about. Beyond just their looks, these are damaged and oftentimes bad people. If their friends can see the worst parts of them and still love them, maybe there is hope for all of us humans too.

The film doesn’t want you to settle for just anyone though. It also presents a counter point to its theme of familial unity. Surrounding yourself with a family is important, but the film’s villains show how easy it is to fall into groups of people who are bad for you.

The first example of this is in The Sovereign, a planet of aliens the Guardians encounter early in the film. With their decadent clothing blending into their solid gold skin, The Sovereign all look basically identical. Ayesha (Elizabeth Debicki), their leader, is the only character among the Sovereign we get to know, and even then, just barely. Otherwise, the Sovereign’s behavior is as uniform as their appearance: aloof, detached, and snobby. The only time they seem excited is when they are piloting their remote controlled battle drones, where life and death battles for their opponents play out as a giant video game on their planet.

Ayesha, leader of the Sovereign. [Den of Geek]

It’s also worth noting that while most of the good aliens (Gamora, Drax, Mantis) in the film are played by people of colour. The Sovereign seem to be entirely white, which plays into their thematic connection. They dress affluently, act arrogantly, and all their most important interactions are done through screens. If that isn’t an indictment of rich, white, millennials, then I don’t know what is. The Sovereign are a family, yes, but they are also group of people who think in the exact same way. It’s important to find people who help and protect you, but not people who force you to conform. However, the Sovereign aren’t the only example of this:

The Ravagers are a group of space pirates lead by Yondu Udonta (Micheal Rooker), who is violently replaced as their leader in a coup headed up by Taserface (Chris Sullivan). Taserface panders to the Ravager’s worst instincts, telling them Yondu is a weak leader for showing any kind of empathy.

The Ravagers are in the film to show us that a group is not worth sticking around in if they only appeal to your worst, most primal instincts. The Ravagers behave almost like a college fraternity, drinking and fighting among themselves constantly. They abuse and torture Baby Groot (Vin Diesel), all the while shouting “Mascot! Mascot!” and dressing him in their uniform. The implication seems to be that they hope Groot will grow into one of them, and their abuse is some sort of initiation. Maybe all the ravagers went through this kind of initiation, one designed to make them hate themselves as well as the rest of the world. The Ravagers are a family, but one built on toxic-masculinity and posturing, exemplified best in a scene where Rocket (Bradley Cooper) turns them easily against Taserface just by making fun of his name.

Maybe no one exemplifies the theme of finding your own family better than Rocket, a character who director James Gunn once said this about:

“I identify more with Rocket than with any other, I am Rocket” – James Gunn

Rocket’s arc in the film is in his relationship with Yondu, another character who has problems connecting with people. At the beginning the film, both Rocket and Yondu anger their surrogate families, and are left alone. They are each captured by Taserface, and in their shared cell recognize something in each other. Yondu correctly identifies that Rocket’s anger and cynicism is thinly disguised self-hatred, stating explicitly that he knows this because he feels the exact same way. In recognizing this truth about each other, the two connect and start to heal. After all, if they can like each other, maybe they can finally learn to like themselves. When Rocket welcomes Yondu to “the frickin’ Guardians of the Galaxy”, he is also welcoming himself, finally accepting that he deserves to be there.

In learning the same lesson, the consistently self-interested Yondu sacrifices himself for his surrogate son Peter and redeems himself in the eyes of his surrogate father Stakar (Sylvester Stallone). At his funeral, attended by Yondu’s former Ravager family, Rocket says ‘He didn’t push them away”. Peter, catching his tone, and realizing Rocket isn’t just talking about Yondu, responds “Well of course not”.

But Peter would never have made it to the funeral if he had never escaped Ego’s control, who in the climactic moments of the film seems to offer him everything he’s ever wanted. Peter has godlike power, immortality, a sense of purpose, and all of this alongside his biological father, a man he’s been looking for his whole life. “What greater meaning could life possibly have to offer?” Ego asks him. Peter thinks.

In a series full of character’s who’ve lost their families (Peter, Drax,) had to survive with abusive ones (Gamora, Yondu, Nebula) or have never known them at all (Rocket, Mantis), you’d forgive these characters for losing faith in the concept entirely. But in Guardians of the Galaxy, family may be one of the most powerful forces in the entire universe, and it may even save you when you need it the most.

Wonder Woman Projected To Sell $65 Million At The Box Office

Why The Lorax Should Be Appreciated More 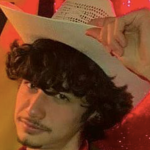