Trigger warning: This article briefly references to rape and abuse.

“…This is about how we conduct debate in public about sensitive things. It’s toxic, it’s juvenile, it’s destructive. We think it’s more important to be right than it is to appeal to the humanity of those we disagree with. Ignorance will always walk amongst us because we will never know all of the things.” –Hannah Gadsby, Nanette (2018)

“I cook dinner way more than I lesbian but nobody ever introduces me as ‘That chef comedian’, do they?” Hannah Gadsby, at the beginning of her show “Nanette” fills the room with roars of laughter as she revisits her usual style of self-deprecation as she jokes about how no comedians can make lesbians laugh. “I had to leave [Tasmania] once I found out I was a lesbian… I got a letter” she says, with a smile infectious, eyes wandering the room before her.

After the steady beginning that was reminiscent of her past comedy work, Gadsby confesses that she is beginning to reassess whether or not to continue to pursue comedy. Effectively, in tune to the times and later personal note on humanity she notes that it is “healthy to reassess”. Upon her insistence that her act of self-deprecation through comedy, as “somebody who already exists in the margins” is not “humility”, it is “humiliation”, Gadsby tells us that she feels in her work she put herself down “in order to speak” or, to “seek permission to”. With a firm, assertive approach, and softness in her eyes as she shares her emotions with a crowd, she tells that she will no longer self-deprecate anymore, not only for herself, but for those who identify with her. In that moment, there was a switch in the way the show was carried. In that moment the show became not only something that seemed to strive to entertain, but to educate. A cathartic show that holds elements of comedy (as much as it is anti-comedy), laced with recollections of trauma.

Gadsby, it appears in the beginning showed her audience rather than just told them of struggle that is, being “different”. She used the construction of a joke to show the audience this struggle. She says “jokes only need two parts”, that being: the tension, and the relief. “I make you all tense,” she says “I make you laugh, and you’re like ‘thanks for that’” only to reveal that she is such a “funny f*cker” because she has been learning the art of tension diffusion as a coping mechanism (she said it was a “survival tactic”). Gadsby compares the difference between jokes and stories, she explained how stories have three parts and therefore, telling her story in only two parts has been damaging for her. She revealed that, through comedy, she “froze an incredibly formative experience at its trauma point” and “sealed it off in jokes”. This theme, this idea around tension appeared to drive the show. Gadsby seemed to use this notion to effectively make her audience feel this tension, so that they can feel the pains of being different, of holding this tension she describes if you are “different”. The pains of having a story that cannot be told due to shame. The pains of living in a world that rejects who you are. 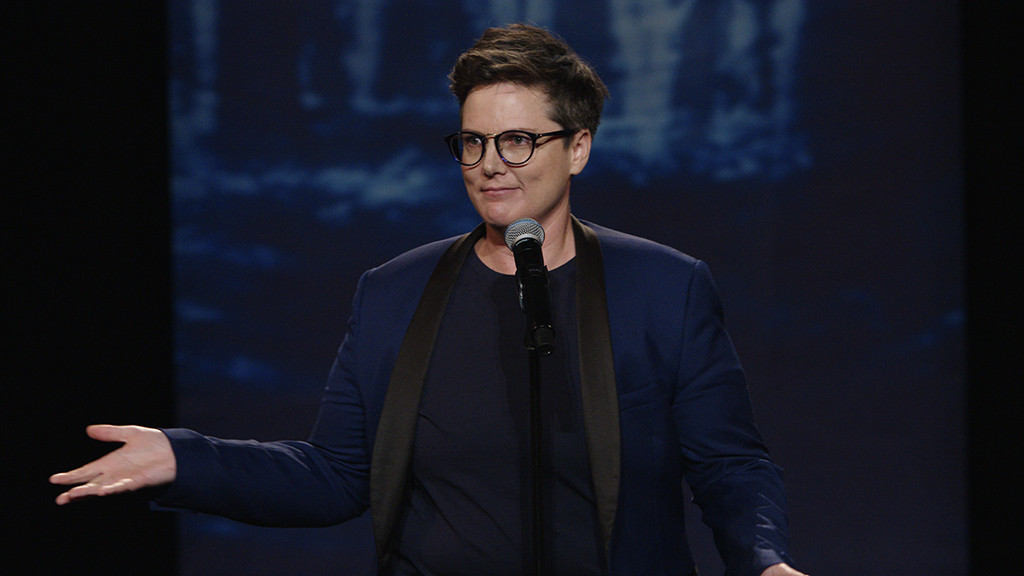 This tension can be felt when watching the show, even when not in the audience. There is a certain silence that is held at points. It appeared, as the show continued, instead of punchlines, Gadsby built this tension purposely, punctuating her points with heart-breaking confessions apt to the time. She mentions to the #MeToo movement, firstly through Pablo Picasso who Gadsby believes to have took advantage of Marie-Thérèse Walter, when she was seventeen; Picasso was forty-two.  Soon after, she lists “Donald Trump, Pablo Picasso, Bill Cosby, Woody Allen, Roman Polanski…” explaining to her silent audience that “these men are not the exception, they are the rule.” Ultimately, Gadsby shows from history to now the perpetuation of misogyny, and men taking advantage of women, getting away with it because of their “reputation”. She shares her views and sheds light upon the patriarchy. “…Virgin or a whore… you have a choice… the patriarchy is not a dictatorship” she says, eliciting a laugh from the audience to later confessing to the sexual abuse she endured as a child, she speaks about the “two men” that raped her. Gadsby admits to how she is “afraid of men” and she tells that if you are listening to that and are surprised, you are not talking to the women in your life.

When watching, it seemed that she perfectly orchestrated the tension as she revealed confessions in the room, meanwhile she seemed to highlight the necessity of it, especially when she addressed the audience, telling men (specifically) to “pull [their] socks up”. In turn, almost showing that being uncomfortable is good, it makes us (as humans) reassess just as we learn and develop as beings, accepting our surroundings, recognizing humanity to, in turn, perhaps dismantle internalized ignorance. She says: “You need to learn what this feels like because this… this tension is what ‘not-normals’ [what she considers herself to be] carry inside of them all of the time because it is dangerous to be different.”  She finalizes her point with: “…this tension…it’s yours… I am not helping you anymore.” once again building this piercing tension, the performance forces you to pay attention.

Gadsby puts emphasis upon the importance of telling our stories, the importance of sensitivity, and of being human. After all, Gadsby appeared to attempt to capture both joy through laughter and anger through tension consistently throughout – both raw emotions that make us human. One could say Gadsby truly tries to make us feel so that we can understand. Forcing us to engage, to understand, to reflect. “Hindsight is a gift, stop wasting my time” she exclaims and repeats. Gadsby tries to show us through her words, her tension, and symbolic backdrop of blue which she describes as a colour that is “full of contradictions” that it would be a much “better world” if we could see as many perspectives as possible. “Diversity is a strength. Difference is a teacher. Fear difference, you learn nothing” she tells her audience firmly, and finally: “stories hold our cure…like it or not my story is your story and your story is my story.” what she says is unifying, it in a way creates an urge to speak out. In addition to this, Gadsby also speaks out on mental health as she shuns the romanticization of mental illness which she claims is not a “ticket to genius” but a “ticket to nowhere”.

Gadsby told Forbes that she wanted to shock those who were to see or watch “Nanette”. This is something she definitely did. Ultimately, it could be said that “Nanette”, more than anything, is a brave, bold and moving theatrical piece as well as an anti-comedy that truly tackles some of the nastiest corners of the humanity, with good humour. Ending and beginning with her in her own home, making a cup of tea, sat with her dogs, the piece was touching and personal as well as groundbreaking; demonstrating just how important all stories are.

In this article:#LGBTQ, comedy, feminism, hannah gadsby, nanette, theatre
Up Next:

Netflix Misses the Mark Once Again With New Fatphobic Series