How 'Shameless' Educates the Privileged
Advertisement

The popular Showtime television show Shameless, based off of the U.K. version, encompasses a “white trash” family living below the poverty line in the southside of Chicago. With a deadbeat dad, no mother in sight, 20-something-year-old Fiona Gallagher is forced to raise her five siblings (Lip, Ian, Debbie, Carl and Liam) by herself.

In the pilot episode, the story unfolds as the camera poses upon Fiona waking up her full house of siblings. She walks around piles of dirty clothes, finally finding something to wear after merely searching for a clean shirt. The three grown boys race to the only shower in the house as Debbie, of elementary school age, takes care of her baby brother. At the breakfast table, bottles of vodka and overdue bills surround their generic cereal brand feast. Fiona passes around a box for everyone to pitch in just so they can afford to pay the electric bill. Water is stirred into the milk jugs to make it last longer, a single cell phone with only fourteen more minutes on it is tossed around the house as needed, and the shaky, run-down laundry machine is propped up on a chair while running. This is the reality of typical families in poverty.

I grew up on the opposite side of the spectrum than the Gallaghers. I was raised on the north side of Chicago, the “rich” side of Chicago. I spent my summers in Lake Forest, swimming in the cold waters of Lake Michigan with my family; sometimes we were even lucky enough to travel to California or Florida. As a child I didn’t have to worry about not getting hot water in the shower, paying the electric bill, or taking care of my younger siblings. My parents have always supported my physically and emotionally, and we have never had serious money troubles. This was my “normal.” For the Gallaghers, and many other American families, my “normal” may be considered their “paradise.”
Before deciding to press play on my Netflix account, I was skeptical; I thought this television show would be like any other. But I was wrong, for it taught me very valuable lessons. Shameless allowed me a glance at the lives I lived so near, yet never knew about. Some of my family members could have been living like this and I would have had no idea! Art forms, such  as television shows, can open our eyes to the underprivileged, and have the power to show us how the other half lives.

The History Nerd’s Guide to Netflix 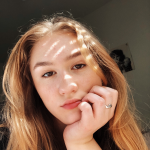 Remy Fisher, a 16-going-on-17-year-old girl who lives in rural Northeast Indiana. Currently the Editor-in-Chief of her high school's newspaper and yearbook, she plans on studying journalism in the near future and wishes to spend the rest of her existence writing and documenting. An emotional Pisces and David Bowie devotee, Remy loves talking politics and anything relating to feminism as well as inspiring and educating her peers through the power of writing.