In A World of "Cool Girls", What Girl Am I?
Advertisement

“…the girl a man like Nick wants: the Cool Girl. Men always say that as the defining compliment, don’t they? She’s a cool girl. Being the Cool Girl means that I am a hot, brilliant, funny woman who adores football, poker, dirty jokes, and burping, who plays video games….Cool Girls never get angry; they only smile in a chagrined, loving manner and let their men do whatever they want. Go ahead, shit on me, I don’t mind, I’m the Cool Girl.“ – Gillian Flynn, Gone Girl (2012)

Gone Girl written by Gillian Flynn is the first adult novel that I have ever finished and fell in love with. I’m not only in love with the book, but also the complex characters within it, my favorite being Amy Elliot Dunne.

For those who have not read or watched Gone Girl, it is about a woman, Amy, that goes missing. Her husband, Nick, and others are trying to piece together clues to figure out where she is. In the novel, the reader, as well as the characters, realize that Amy kidnapped herself plans to kill herself, looking to frame Nick for her forthcoming death. She ends up not killing herself in the end, deciding to return to her husband and terrorize him.

But this article isn’t about the plot. No, no, no, no, no. It’s about Amy Frickin Elliot Dunne and her idea about the “Cool Girl.”

In the quotation above Amy continues on to say that a Cool Girl doesn’t change for herself, but becomes someone that a man wants. She also talks about the different versions of the Cool Girl. Women have played these roles and she has too.

As I read that section in the novel, I kept thinking about myself. Do I do this? Do I compromise who I am for a guy? The answer to those questions is: Yes, I do, but not only for men, for other people too.

I just graduated from high school like a month ago.  Looking back at my high school career, I’m quite disappointed in myself because I was never really myself. Each year I became someone people expected me to be. I was always pretending and I didn’t like it, I didn’t like who I was becoming. I was doing things I didn’t want to just to be liked. I had no self-respect, especially the second semester of my senior year.

Earlier this year, I had a crush on a guy in my grade, let’s call him “John.”  John was into skateboarding, he was into weed and other various drugs, he was into rapping and rap music. But he was also intellectual, having a keen interest in astronomy. He had plenty of good and bad qualities, and I liked him so, so MUCH!

I honestly do not care for rap at all, but I began listening to it and trying to write raps. I started taking an interest in weed. John smoked a lot of weed. He was kind of known for that at school. I started smoking. I started dressing differently. I was changing so much. I was doing things that I didn’t even want to do. Whatever he was into, I was into. I just wanted to relate.

We finally dated. It lasted a week.

I feel as though women, myself included, do this far too often. We’re constantly playing different roles to please someone, but why is that? Why do we have a need to be liked or revered? In a society controlled by men, women want to succeed and be accepted. That is why we become the “cool girl,” in order to be welcomed into the male-dominated fold. We use the cool girl persona as a means to gain power and acceptance, despite sacrificing our individuality in the process.

I think that’s exactly what the Cool Girl is.

A Fan Theory About Martin Starr’s Character in Spider-Man 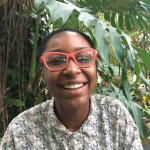