Is She Lost?
Advertisement

The wind is chilly. A lass was walking down the empty streets that were covered in ice. She looked up and saw the flickers of the stars that filled up the night sky.

Her mind is going to places.

As she continued walking, an eerie feeling crept up on her skin. Could it be because of the night breeze?

It’s not the air. It is definitely a familiar feeling. She felt this a lot of times already. It was as if someone was watching her. Though this thought was disturbing her, she continued walking.

Suddenly, flashes of the past crowded her mind. A man, a cafe, a broken mug and a town car. At this moment, she felt as though she had powers — she was invincible. However, the air got colder. She became more uncomfortable. The unheard cries of lost souls are deafening. Nevertheless, she kept on walking.

“Just go on,” she thought. But no. Her legs were already tired. She can feel that her muscles had cramped up.

“Move.” A voice trespassed in her mind.

She closed her eyes. She covered her ears with her hands. She wanted to scream but was too afraid to make a single noise.

“Oh, I’m sorry,” a stranger said, as he bumped into her. She ignored the man and just kept on walking.

The lampposts are broken. The stoplights were torn down. There were cars everywhere, scattered like snow.

“What happened?” she wondered.

The cafe downtown seems to be the only building open at this time, so she walked toward it. The booths were empty. No one was inside. The city of Rosewood had died.

“Antonio?” she asked, but no one replied.

She sat there for an hour or two in the company of broken mugs and dusty windows.

“Where are they?” she asked. Rosewood used to be so alive. It was full of kids pushing each other around at the playground, mothers gossiping about their annoying neighbors and any possible thing that could happen under the sun. What happened to it now? Where is the life, heart and blood of this city?

All of these thoughts drowned her. Her eyes were heavy. Her head was spinning. Her body was tired. Everything was turning into a blur. The flashes and pieces of her past distracted her again.

“Antonio? Please say something.” The face of this man kept appearing in her mind. She tried to erase these thoughts by pushing her head back against the booth. She can hear the sirens of police cars and alarms winding on and off from afar.

And she wondered, “what happened?”

As the night passes by, her eyelids continue to get heavier and heavier. No one is around. The only human that she encountered was the stranger who bumped into her.

She should have talked to that man for he may hold answers to all of her questions.

She stood up, ran fast even if her muscles are all cramped up. She ran and ran but couldn’t find the man.

As she turned to Dahlia St., she noticed that everything was broken. Her home, family and future. She kept on running but it didn’t help or changed anything.

Flashes of a man, a cafe, a broken mug and a town car appeared on her mind once again.

“What do you want from me?” she screamed back.

The sight of a town car stopped her. It was approaching her slowly, but she just stood still. 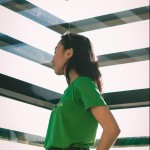 A Filipina artist who creates works of art with brushes, pens, words, films, and photos.