A Glitch in the Matrix: A Review of the Final Season of 'Dark'
ShareTweet

The writer and producer for 2018’s Assassination Nation (and also the creator of this series) Sam Levinson returned to the forefront for the series’ seventh episode. As someone who endured drug addiction and mental disorders, he depicted an accurate portrayal of depression that hit close to home for many of his viewers.

There’s a common theme in all, or at least the majority, of the cast in Euphoria. These kids don’t have the healthiest relationships with either one of, or both their parents. Parallel to Maddy (Alexa Demie), the absence of their father’s who are both struggling through substance abuse, Cassie (Sydney Sweeney) has a flawed perception of what love truly is. After her father’s car accident (unfortunately it wasn’t Nate in that preview), his dependency on drugs worsen. At some point, he asks Cassie (and only Cassie) to open the garage door, where he asks her to steal things from home in order to fund his drug habit. After that night, she never saw her father again, nor did she tell anyone about what she did. This perception, disregarding herself for someone else’s benefit, follows her into all of her relationships. She falls in love with every guy she dates, whether they’re abusive or not, and makes herself believe that letting men take advantage and record their most intimate moments is acceptable. These destructive relationships ultimately warrant this underlying want for a fairytale ending which is why she’s disappointed by McKay’s (Algee Smith) response, but admits she only wanted to “dream about it.” It’s clear she wants to experience love in a different way for once. In a way where she doesn’t have to be shamed for her past and who she is as a person. 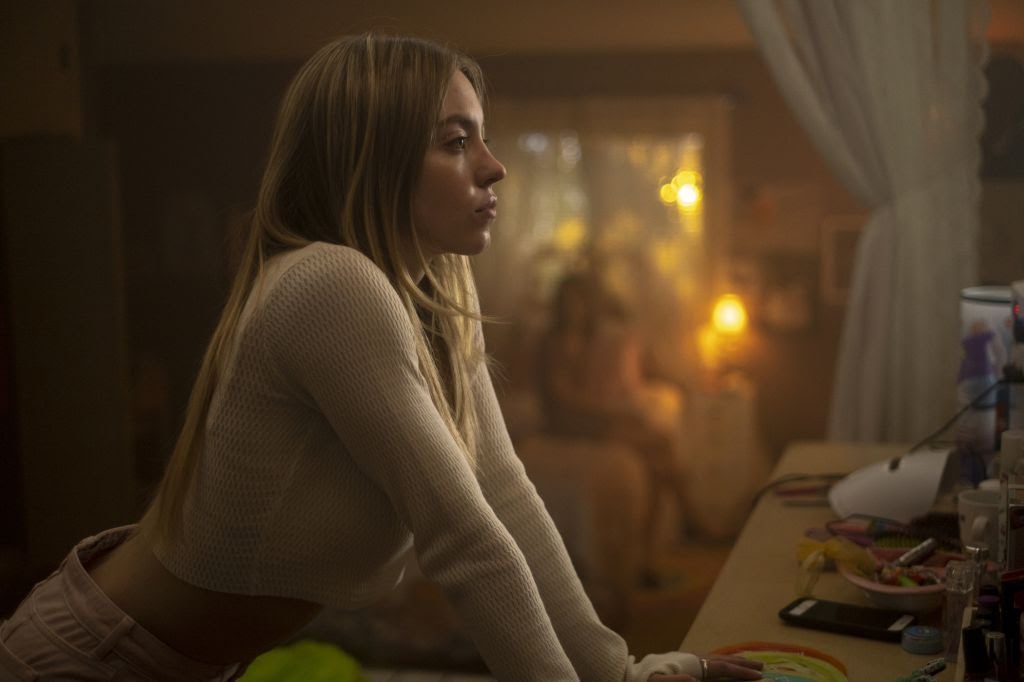 Zendaya, or Rue, our comedic relief, gets to the bottom of Jules’ (Hunter Schafer) predicament with Nate (Jacob Elordi). Her and Lexi (Maude Apatow), in a Buddy Cop rendition, figure it’s Nate who was behind Shyguy118 and is the reason Jules testified as a witness of Tyler’s (Lukas Gage) alleged assault against Maddy. In the midst of these manic moments, she suffers through major depressive episodes (symptoms of bipolar disorder) that makes 35 steps to the bathroom feel like the hardest feat to conquer. I applaud the accuracy of the portrayal of bipolar disorder, or mental disorders in general, on this show. The media often paints the illness through people who go back and forth between being angry and happy when it’s usually not the case, which leaves room for ignorance (as seen with Rue’s friends and family) on the topic. I think this is why Levinson uses the comedy route in order to convey the lack of awareness people have with the disorder.

In another bout of mania, Rue ends up giving Fezco (Angus Cloud) a suggestion that even he sees is a terrible idea. However, as expected, he goes through with it and threatens Nate, advising him to leave Rue and her friends alone. This, of course, backfires and Nate calls the police on Fezco, which forces him to get rid of the pills. Now, fast forward to the promo for the season finale, Fezco is seen holding a gun at someone. There’s much speculation about what could go on, but most of us are set on the theory that Maddy (based on that doll photo floating around Twitter) might get caught up in the crossfire. To me, killing Nate would be too easy. This happening (Maddy’s death) might be enough to drive Nate off the edge, ensuing a brand new set of problems for the second season.

nate fucked up by calling the police. I believe that the drug dealer mouse is going to find out that nate called the police & he’s going to shoot up nate’s stalker truck with him & maddy inside of it. pic.twitter.com/vNKB2hJhD3

The sequence of Jules’ hallucinations of Rue and Nate has been the best cinematography of the season and probably of all of HBO. We learn, or further understand, the driving force behind Jules’ character: her need to “conquer femininity.” She ends up doing drugs and in a Requiem for a Dream-esque take, she seems to grapple with her sexuality rather than just her feelings between Rue and Nate. I think that’s the importance of the dialogue beforehand. Nate is what she deems as the blueprint for masculinity. It’s also a major part of her being a trans woman. She doesn’t want to be seen as not feminine enough which explains the encounters mentioned earlier in the season of primarily heterosexual, adamant-about-being-straight men. In midst of her psychedelic trip, Jules hooks-up with Anna (Quintessa Swindell), a friend of a friend, that reminds her of Rue. At that point, she finally accepts her feelings for Rue, but her hallucination reminds her, “this isn’t going to end well.” 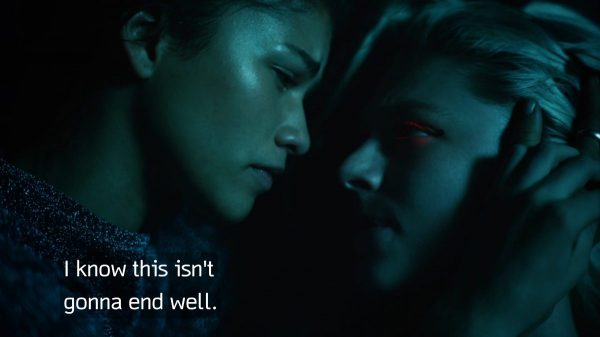 Zendaya and Hunter Schafer in Euphoria. Image via HBO.

Meanwhile, Kat’s (Barbie Ferreira) rude awakening finally occurs. She walks home, crying, after her and Maddy end up having another cam session. This time, it’s different and the man hides behind a black screen and a voice distortion tool. What scares Kat the most is that she’s no longer in control. The man asks her to strip down and stand in front of the camera for him. She decides that she doesn’t have to go through with this (thankfully) and shuts off the computer. This eerie encounter may just be the thing (as I mentioned previously) that pushes her out of the cam-girl business (at least until she’s of age) and allows her to embrace who she actually is rather than the persona this career forces her to be.

Overall, Euphoria’s seventh episode was by far my favorite one yet. In the promo for the finale, I see we finally touch more on Gia’s (Storm Reid) character and her seemingly growing resentment for Rue, which I think makes for a great subplot in the series. What piques my interest the most is the number of possibilities that can occur in the season finale and that’s what makes this show so special. Most of us have a vague idea, but we have no set direction on where the producers may take us.

Euphoria airs every Sunday on HBO at 10 p.m. ET.

The Return of the Shelbys: A “Peaky Blinders” Trailer Review

Orange is the New Black is Back For its Final Season: Review