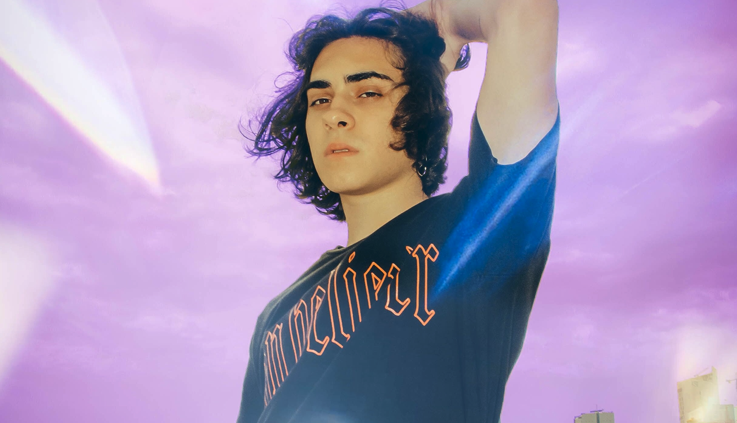 Marwan Daoum (Maro) is a smash hit YouTuber with over 700,000 subscribers and over almost 39 million views. Maro can speak four languages (French, Arabic, Russian, English) and sing in seven, so his vocal style and covers in multiple languages have caught the eyes of fans around the world. Maro explained that while he sings in many languages, “it’s really not a big difference,” when it comes to his process. Maro has officially released his debut single, “carsick.”

“carsick” opens with muffled radio noises and lo-fi tones before the acoustic guitar and Maro’s distinct voice begins. There’s a repetitive nature to the guitar and tone of Maro’s voice in the first verse, before an echoed chorus joins him as he compares the subject of the song to “poison runnin’ through my veins.” Maro shared that there was no specific event that was specifically “poisonous,” saying, “Not only one, but there were moments where the relationship became really toxic…Toxic relationship=poison in my veins.”

That lyric initiates the chorus, which is full of a heavier beat and commenced with clapping. In the chorus he sings, “Girl you make me carsick/Late night in the bar sick/Driving me insane the way you playing with my heart still/I can never say no… I’m unstable, Maro’s voice gets higher  as he sings, “And honestly you will always be the better part of me,” showing off some of his vocal talents, and breaking from the overall sound of the “carsick.”

The heft of the track’s meaning is found in the chorus, as Maro sings about how despite the fact she makes him feel queasy and unsettled, he just keeps returning to her. Maro elaborated on the story behind the lyrics, “There was this girl I had a kinda toxic relationship with, and we literally went back and forth together (like the song lyrics) and we just made it worse for both of us by our love/hate relationship. This made me get the feeling of being carsick, like sick in my stomach and head.”

In the next verse, Maro sings, “Back and forth together…Hold on to each other/Can feel this for another/It’s too much for the both of us.” The way the rhythm of the verses are similar to each other but broken up by the chorus mirrors the relationship looping. Maro knows that this girl has been a big part of him for a long time, so he hates the fact that it’s just not a healthy dynamic. Maro explained how being in that sort of relationship affected him, “I felt like it made me a worse person.”

“carsick” has a really catchy sound, but the lyrics and meaning are full of reflective moments of clarity. Maro shared his process for making the sound and choosing the contrast between the lyrics, “I had this guitar riff, we recorded the guitars, and kinda just decided to write about a toxic relationship I had. The songwriters and I went back and forth with it trying to make a good song and BOOM there it was. I like sad lyrics, but I also like happy songs occasionally, so I guess that’s where it comes from,” he added, “I prefer sad songs :).”

Making music has been a dream of Maro’s for a long time, as he began playing piano in second grade, taught himself guitar, attended music school and began writing his own music. Maro talked about how he got his start, “I was a big Justin Bieber fan (super fanboy), and I saw him make his way from YouTube to a superstar, and I wanted that for myself. Also, I wasn’t the smartest kid in class, so university wasn’t really my dream or an option in Lebanon.”

Filmed a lil video since I got back to lebanon, if you can, please donate to the Lebanese Red Cross, they’re helping out thousands of people during these rough timeshttps://t.co/egdsnqKx04 pic.twitter.com/invSBPXbOW

Maro shared that this song is really meaningful to him in many ways. This is his chance to truly show off his own style, not just through someone else’s words. Maro discussed this difference, “Well, in my covers I don’t really get to express myself other than showing that I can sing. With my new single and my upcoming music, I can finally share my personal experiences, and it feels really good.” Maro’s covers are viral, scoring serious views and many, many declarations of love in the comments. However, Maro admitted, “I also don’t enjoy making covers that much…” There’s a passion and excitement in his voice on “carsick” that isn’t always present in his covers.

There’s a level of effortlessness in his cover videos. Maro shows himself reaching to turn the camera on and off, adjusting his guitar and even squinting into the sun. He settles in to record videos on kitchen floors, outside and in the dark. His breath support and vocal control are impressive, especially considering his sitting position and how he makes his videos in “always one take.” This natural ability is a testament to his skill, but sometimes comfort isn’t fulfilling.

Maro explained how he makes his covers versus professional recordings, “First of all, I record all my covers with an iPhone, both audio and the video, so it’s fully live. In the studio, I have a nice lil’ set-up, which is waaaay more professional than my iPhone. Also, I can have more vocal takes in the studio, which makes everything sound better when you choose which vocals you like the most.”

Making his own music is a form of release for him, and now he’s proved that he has the ability to find great success with his own style. Maro shared, “I just genuinely like music, it can mean a lot, depends on my mood, to be honest. If I’m sad, angry, in love, depressed, hyped, there’s always a song for it. It’s like subconscious therapy.”

Already reaching almost 1.5 million views on the lyric video alone, the track is already a success. One could say, “this is a future star,” but in truth, he’s already well on his way. “Carsick” is Maro driving away from the unhealthiness of the relationship, and towards his passion for his own music.

Image courtesy of Drill Down Media