Las Estrellas, an Argentinian telenovela, has taken a large portion of the LGBTQ+ community by storm through the showcasing two of their characters and their relationship. Florencia Estrella (Violeta Urtizberea), the bubbly and bisexual hotel owner of many talents, and Jazmín Del Río (Julieta Nair Calvo), the lesbian artist and chef, compose “Flozmin” – the couple some call the best F/F representation on television of not only 2017, but of all time so far.

As someone who was at first unconvinced but later began to follow their story, I can proudly agree that the writers of Las Estrellas are doing with their F/F couple great things that I have never seen before with American television. Here are some of the biggest reasons why Flozmin is so notable.

1. Extensive screentime never has to be fought for.

Flor and Jazmín so far have a cumulative screen time value of eight hours —and the show isn’t even finished yet! This amount includes the scenes they have together and the scenes where they mention each other. With every episode, it ranges from 5 minutes (rarely) to 25. It is typically closer to the latter. Meanwhile, most American television shows typically give their F/F couple four minutes, or eight on good days.

Flozmin’s screentime is never wasted, either. The pair spends about 65% of their episodes together building a strong and supportive friendship, which slowly transitions into romance. They are given great lighting and angles, scenes straight out of a fanfiction, growing together through difficult times, and much, much more. From the second they first meet to their wedding day, it’s all captured and shown. This is especially significant because the show airs in Argentina, a country in Latin America that leads in LGBTQ+ rights but still has, as numerous Argentinian members of the community have described, a very conservative atmosphere. 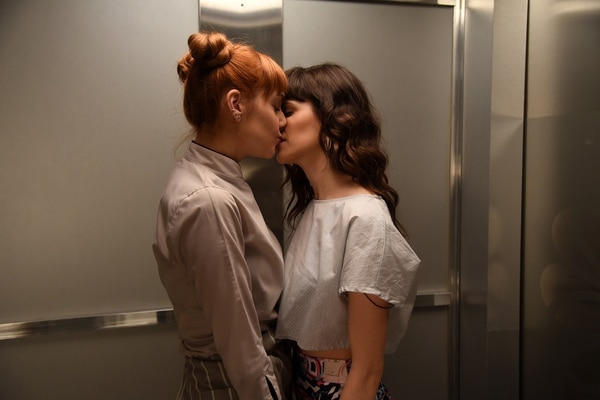 […] Even though Argentina was the first Latin American country to legalize same-sex marriage in 2010, people’s views on the subject have not changed. They still see it as obscene and perverted. Therefore, the writers have explained that it is important to show a paced development…

Flor is almost always seen with nervous tics that involve outbursts of cursing and repetitive movements. Snapping, thrusting of her arm, and excessive blinking are most prominent. She describes developing the disorder at the time of family issues occurring, and how she still visibly struggles with it. But over time, Flor begins to slowly accept help for it. It is not very often that a bisexual woman with a disability is portrayed thoroughly on television, let alone one with Tourette’s. As a glimpse into living with Tourette’s is given in Las Estrellas, so is seeing how Flor’s family and friends support her through it and make her remember that she is more than her disability.

3. Flor and Jazmín are complex characters who have individual development and screentime outside of their relationship.

On the one hand, Flor is a woman who is multitalented and is still working to figure out her true vocation. She is one of the main characters of the show and, even after the short amount of episodes, you will begin to feel like you know her personally. As she manages the hotel she inherited with her four other sisters, she is shown going through personal dilemmas, family crises, and denial of her sexuality. Her humor and innocent optimism brighten the colors of Las Estrellas undoubtedly.

On the other hand, we have Jazmín, the chef of the hotel who secretly paints at the same level of expertise as any high-level artist. Although she is a side character, she is more than just Flor’s love interest and is treated as such. Relationships between Jazmín and the other individuals in the hotel are highlighted, especially between her and long-time best friend Javo who cooks alongside her. Anyone watching can gather that Jazmín is truly selfless and goes out of her way to help people in need, even Flor and her ex-fiancé when she was quietly in love with the former.

Quietly including cameos of the ship name and arcs that females in the LGBTQ+ community have requested for in the past are just some of the things the writers have done to make sure they provide stellar representation.

5. Flor’s coming out arc accurately captures every emotion, all the way up to her coming to terms with herself.

Flor had always thought of herself as heterosexual before Jazmín confessed her feelings to her. This catalyzed her excessive denial of the feelings she was realizing she had for her best friend. Though she cancels her wedding because of the other girl, it takes a long time before she can finally admit to anyone that she feels this way.

Along with the process of realization being so well captured, the fear one feels in that situation was also portrayed exceptionally well. When her mother found out and broke down, Flor was shattered. Even when engaged to Jazmín, still felt hesitant telling a child they ate lunch with that they were romantically together. She had always thought she was straight, and now that her life and mindset has been drastically altered, she adjusts to the changes and builds pride in her identity along the way.

Because I’m in love, because I love her and that makes me feel like I’m in the clouds. And it’s a girl, yes, it’s a girl. I don’t care if it’s a girl or a guy, I’m in love with a girl and no one else is going to make me feel ashamed of that.”

6. Flozmin defies low standards of LGBTQ+ couples in fiction media and goes above and beyond.

If you were a fan of Jim and Pam’s dynamic on The Office (U.S.) and a female member of the LGBTQ+ community, I guarantee that you will absolutely adore Flor and Jazmín. They spend what seems like forever pining over each other, but when they finally get together all that time is made up for.

In this article:#LGBTQ, flor and jazmin, flozmin, las estrellas, lgbt, representation
Up Next:

Why ‘Grey’s Anatomy’ Is the Perfect Show to Binge

Cat is a 5'0 senior in high school with dreams that reside much higher than her height. Her passions include academia, berry smoothies, and LGBTQ+ rights. (IG/TWIT: @catnipscarlet)