Meet Jamie Brewer: The First Actress With Down Syndrome To Play The Lead In Broadway Theatre
Advertisement

From left, the actor Edward Barbanell; the director Scott Ellis; the actress Jamie Brewer; and the playwright Lindsey Ferrentino, author of “Amy and the Orphans.”
1k
SHARES
ShareTweet

Determined to make a difference after the horrific incident in which Donald Trump ridiculed a journalist with a disability, playwright Lindsey Ferrentino and actress Jamie Brewer decided to base their most recent play around a character with Down syndrome.

The play, “Amy and the Orphans,” which opens on the first of March in a Roundabout Theater Company production at the Laura Pels Theater, is, without a doubt, a show that shook the very base of ableism. Jamie Brewer, 33, and her understudy, Edward Barbanell, 40, are considered the only known performers with Down syndrome to play the lead roles in an Off Broadway or Broadway theater production to this very day.

The play is about three siblings who meet again after their father’s death and the road trip that follows. Lindsey, who achieved great success with her critically renowned play, “Ugly Lies the Bone,” was concrete on the belief that the title role was to be acted out by someone with the disability, and she left a note in the earliest draft of her script that said: “Finding a talented actor with Down syndrome isn’t difficult. So please do it.”

The play is based on Ferrentino’s aunt, Amy Jacobs, who also had Down syndrome and sadly passed away. When Lindsey began writing the play, the intricate process of her writing had made certain complications, such as the limited verbal skills her aunt had, which made dialogue a significant challenge.

Lindsey later reached out to Gail Williamson, Jamie Brewer’s agent who connected her with Jamie. Jamie had just achieved the title of being the first person with Down syndrome to walk the runway at New York Fashion Week. Jamie is also a veteran actress, who appeared on FX’s American Horror Story.

Jamie told Lindsey that when she had was asked to play characters with Down syndrome, she often had to suffice an audience’s expectations, regardless of her abilities. Instantly, Lindsey decided that the play would be as much about Jamie as it was about her aunt.

“That informed how I wrote the play,” Lindsey said. She wanted to give Jamie room “as an actor and a person — a chance to step outside that role and show the audience who she actually is.”

Jamie, who was an only child, grew up in Orange County in California before moving near Houston, where she started to get involved with a local theater. Jamie claimed she started performing around eighth grade with her family’s support.

After the play was complete, the task left was to find Jamie’s understudy. Gail linked Lindsey with Edward Barbanell, who was living in Coral Springs, FL, and now plays the lead male character, also a character with Down syndrome.

Because it was their first session, Lindsey told him not to prepare anything — she just wanted to meet him. But Edward Barbanell, accompanied by his mother, was all set to go, with scenes ranging from “A Midsummer Night’s Dream,” to “Julius Caesar,” “Henry V” and then “Romeo and Juliet.” At a diner, he pushed his ice cream sundae aside and suggested showing Lindsey his skills. It was easy as that, charming Lindsey.

“He performed the most beautiful, word-perfect Shakespeare,” Lindsey said.

On the first day that the cast rehearsed in the actual performance space at the Laura Pels Theater on 46th Street, Edward, encouraged by Lindsey and Scott, stood up and enthusiastically recited Romeo’s entire balcony speech from “Romeo and Juliet.”

“Because I have Down syndrome, I’m down, and I’m up,” Edward says. “I’m like an elevator, and they brought me up,” he added, referring to Lindsey and Scott’s undeniable support.

“The questions that we had, so far, are what is it like having actors with Down syndrome in our professional rehearsal space?” Lindsey said, “Well, we’ve answered at least that question. It’s not that different. So the next question is, what would it be like to have them in performance? Who knows what the answer to that is?”

In this article:broadway, Down Syndrome, Jamie Brewer, off broadway, theatre
Up Next:

Meet The Cast of the ‘My Fair Lady Revival’ Broadway Revival 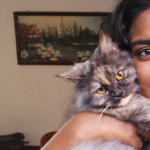