Mandy Harvey is the 29-year-old singer-songwriter from Cincinnati, Ohio who has initiated her claim to fame via America’s Got Talent, a network television program and competition that showcases a variety of entertainment acts. Harvey is also deaf, a result of a connective tissue disorder that caused her to become sick and her nerves to deteriorate.

No matter what happens today I'm truly thankful and blessed to have you in my life! Thank you for being on this journey with me…I know we are just getting started! I love you All! #neverstopping #chooselove #encourage

Harvey had a background in music before the loss of her hearing. She grew up singing in her Ohio and Colorado homes throughout her secondary education, winning Top Female Vocalist 2006 at Longmont High School. Additionally, she knows how to play the ukulele to accompany her vocals, and she even went on to study singing education at Colorado State University. However, after losing all of her hearing at the age of 19, Harvey chose to give up on her degree at the college, and she took a bit of a break from pursuing music.

In an interview with the HearStrong Foundation, Harvey said she initially did not want to believe that her hearing was becoming impaired.

“In August 2006, while I was at CSU for vocal music education, I started to notice I was having trouble understanding my teachers speaking,” Harvey said to HearStrong. “By Christmas, I was borderline legally deaf, and within nine months, I had lost the bulk of my residual hearing. I initially doubted anything was wrong and tried to convince myself that I just had a bad ear infection or that I was going to get better at any moment. I tried to continue my studies as a music major and avoided conversations with people I didn’t know. In short, I became invisible.”

Music never fully escaped Harvey though. In the year that she had dropped out of college, Harvey encountered her former music teacher, and her father encouraged her to begin music again, at least as a pastime. As she began singing again, Harvey learned that she could actually still sing accurately and in her own style by following visual cues from her onstage musicians, sensing vibrations while standing barefoot on the stage and recalling muscle memorization from her extensive singing experience.

By 2009, Harvey began introducing the world to her music again. She has written and sung approximately 30 singles and songs on multiple albums, and in 2017, she auditioned for America’s Got Talent with more original music in order to expand her reach and impact a larger audience.

Since returning to music, Harvey has won several awards, including the VSA International Young Soloist Award in 2011 as well as the title of HearStrong Champion in 2014. Alongside Mark Atteberry, she is the co-author of the book Sensing the Rhythm: Finding My Voice in a World without Sound, which will be released on Sept. 26, 2017. Outside of music, Harvey promotes hearing loss awareness with the Hearing Loss Association of America, and she is an ambassador for No Barriers to help individuals with disabilities.

Harvey serves as a beacon of representation for deaf children and adults on television and in the music world considering both focus on sound-oriented transmission. Harvey should be revered, not just because she’s deaf and a public figure, but also because she is creating and performing music, which has historically exclusive of deaf people. However, Harvey is showing the world that there are new ways to understand the art of music and performance.

In her Sept. 12 introduction package on America’s Got Talent, Harvey provided a different perspective on music than the majority of the world associates with it.

Leah Remini Puts the Real Back into Reality TV with ‘Leah Remini: Scientology and the Aftermath’ 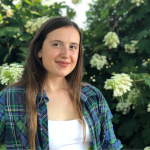 Savanna Vest is a 17-year-old staff writer for the Affinity Magazine. She plans to study a social science while minoring in journalism when she attends college. She enjoys learning about history and current events and has passion in advocating for social justice issues. If she’s not hanging out with her friends and family or spending quality time with her pets, she can typically be found reading or communing with nature in her spare time. Twitter: @savannavest