Netflix’s New Original Anime 'Neo Yokio': Is it Worth the Watch?
Advertisement

“Neo Yokio,” released by Netflix on September 22nd, is an American Anime created by Ezra Koenig and stars the infamous Jaden Smith. The story follows Kaz Kaan, dubbed “the most eligible bachelor” after a breakup with his girlfriend. He is apart of the Magistocrats, which is a family of rat-catchers turned demon-slayers after saving the city from paranormal entities. Kaz’s demon-slaying is more of a nuisance for him than anything, however, as he’s a lot more interested in navigating the upper-class world of “Neo Yokio.” Kaz may realize, though, that the city is not as perfect as it might seem.

When the news of this new series hit the world, the media practically exploded in hysteria. Some hardcore anime fans were disgusted by the thought of an anime from America; others were put off by the black main character, because anime itself is infamous for only having only a sprinkle of dark-skinned characters in their cast list. Some, like me, laughed at the thought of Jaden Smith being the main character of an anime and put it to the side as something to watch for a good laugh. Above all, though, most criticized the show based off of the two-minute trailer, claiming that it both looked and sounded pretty terrible.

Yet, when “Neo Yokio” hit Netflix on the Friday of its release, it seemed as if the general public was fairly amused by the six-episode show. Screencaps of some of the show’s most relatable quotes were brought to Twitter, much to the amusement of curious scrollers like myself.

BECAUSE IF THERE’S ANY SHOW WE CAN TRUST TO TALK ABOUT THIS PROPERLY IT’S NEO YOKIO #NeoYokio pic.twitter.com/pt1HPaug66

let me show you why Neo Yokio is the greatest anime ever XD pic.twitter.com/HDWDXOXJOV

However, multiple articles were also digitized into the online world, deeming “Neo Yokio” practically unwatchable. They slandered the writing, the animation, the voice-acting and everything in-between.

So, what is the truth? Is “Neo Yokio” comedy gold, or is it a stain on anime culture? After dedicating my Friday night to watching the show, I’ll rate it myself and let you know if you should be watching.

Animation: One critique that most people have had, ever since the trailer, is the animation. The show looks like more of a cartoon than an anime — and there is a difference. The first episode reinforces this idea. Wanting to correctly critique this show, I studied everything, from the sometimes absurd locations to the short fight scene. It’s definitely not “Attack on Titan,” if we’re comparing; however, after watching more episodes, you quickly get accustomed to the animation, and the less that you take this show seriously, the more that you find yourself enjoying the style.

Characters: More than anything, the characters — and the dialogue spoken by these characters — is what makes this show as great as it is. In the first episode, Kaz does come off as very try-hard, and the only one who truly sticks out is Aunt Agatha. As the plot starts to manifest, though, you’ll find yourself laughing at whatever each character has to say, including the robotic butler. A highlight of this is Helena St. Tessero, whose character transformation is truly the best — and funniest — thing that I have ever seen in any anime. She quickly became my favorite. As the Helenists do say, “Helena is the plot! And the author! And the main character!”

Another thing that “Neo Yokio” did splendidly: the representation of queer characters. In regular anime, gay characters are often stereotypical and offensive. A lot of the time, they’re even subject to violence for being who they are — though that is a topic for another day. In “Neo Yokio,” queer characters are seen as people rather than caricatures. It’s very refreshing; anime culture is not usually very nice to its LGBTQ+ fans.

Plot: It can be determined by now that I did not quite enjoy the first episode. One reason of this is the plot and how the characters advance through the plot. It felt very awkward, almost rushed, as Kaz went from one place to another in an attempt to complete whatever he needed to do. However, as Helena’s new personality is set, and more interesting demons begin to show their faces, it becomes clear that the show is not focused on one central idea; almost like a slice-of-life, Kaz just goes through whatever he has to go through, whenever he has to go through it. And while the plot does eventually come, you’re already so enamored by the show that you don’t even mind. Rather than feeling a sense of completeness, you’ll find yourself hungering for more after the last episode ends.

Personal Enjoyment: Personally, I haven’t been able to watch anime in a long time. A lot of them feel the same, promote offensive stereotypes, or just don’t represent who I am as a person anymore. “Neo Yokio,” on the other hand, has blown me away; I truly fell in love with the show. I watched it in one sitting — as people do — and laughed the entire time.

Compared to traditional anime, the characters aren’t very fleshed out, the dialogue starts very clunky, the overall plot comes a bit too late and the animation is off-putting — but when you get to episode 2, you begin to fall in love with the characters and the simplistic design. And when you get to episode 3, you’re already hooked, and you need to finish before you do anything else.

Overall, I rate “Neo Yokio” an A-. If the first episode was as good as the entire series, it’d definitely be an A+. But regardless, this show was hilariously great, and I absolutely cannot wait for Season Two.

In this article:entertainment, fiction, netflix, recommendations, review, reviews, tv
Up Next: 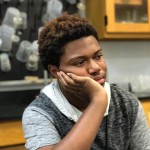