The rising singer has been known for her past appearances in groups such as Fifth Harmony, and has worked with artists such as Khalid, Sam Smith, and 6LACK. But with “Motivation”, Normani officially begins her solo career.

Leading up to the release of the song, Normani created an early 2000 reminiscent promotion, using flip phones, pink glitter, and spray-painted shirts on her Instagram stories to get fans ready for the release.

Motivation, co-written with pop star Ariana Grande, is an upbeat, empowering single for the summer. With the chorus ‘I’ma break you off, let me be your motivation’, Normani encourages listeners to be independent and resilient.

Following the release of the song, Grande tweeted to Normani saying, “my cheeks hurt from smiling, refreshing, watching a million times. Enjoy this special moment. My heart is so full for [you]!”

Along with the single, Normani also released a music video to “Motivation” that paid homage to past female singers such as Beyonce, Jennifer Lopez, and Britney Spears.

The video starts with a young version of Normani sitting in front of the television, watching 106 & Park, when her video gets announced as the number one video. The music video then turns to present-day Normani, wearing a cut-up white tube top and jeans in the street, and turns quickly into a dance video along to the song.

With an outfit change to a two-piece spray painted set that has Normani’s ‘1996’ birth year on it, and a schoolyard scene that reminded fans of Britney Spears’ “Baby One More Time” video.

Fans on Twitter were also quick to point out the inspiration Normani drew from Beyonce’s Crazy In Love, with a street shot of Normani approaching the camera, and Jennifer Lopez’s Jenny From the Block.

This Normani video is giving me Britney Baby On More Time vibes with these schoolyard dancing/tumbling scenes. #Motivation pic.twitter.com/ziCfjRrBhB

she is CITING j-lo with this video. early beyonce. britney. she is paying homage to that legacy while AT THE SAME TIME projecting herself—thru time & thru the eyes of a black girl watching TV—into that very canon. I love 😭 #Normani https://t.co/IcCB1pMD65

“I recorded this song a while back,” Normani told Rolling Stone. “It’s an upbeat [song]. It’s a feel good record. I think that everybody will really love it. It was the first opportunity that I had to have fun.”

From the hype up before the release, the fan-made merch, the song itself, to the music video, Normani created a time warp back to the early 2000s for all of her fans.

Motivation is the first single off of Normani’s upcoming studio album, that has yet to be given a release date or a title.

Author
Meredith Bushman
Meredith is a 16 year- old aspiring journalist from Long Island New York. She’s had a passion for writing since a young age, but has since refocused her writing in journalism. While her main interests are in arts, cultures, and celebrities, she also takes interest in political journalism and current events. 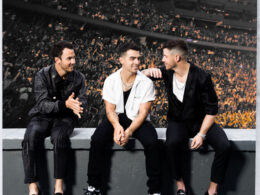