The café was brightly lit, the pungent smell of coffee wafting from the kitchen. Night was falling quickly, but customers still flowed in and out. Dishes clanged in the sink, bells dinged, and food sizzled on the griddle; a symphony of cacophony.

The door to the café opened and a seventeen-year-old in a Yankees jacket stumbled in and slid into a booth. Unzipping his bag and watching the books spill onto the table, he noticed a waitress walking up to his table. She slipped him a blueberry doughnut wrapped in a napkin. “This one’s on the house,” she smiled. “Your shift is in twenty.”

He nodded quickly and almost inhaled the doughnut, licking the crumbs off his fingers. He picked up his English textbook, taking a deep sigh. He reached inside his bag and pulled out an English-to-Spanish dictionary, ready to rifle through the pages whenever an unfamiliar word appeared.

He closed his eyes and ran his hands through his hair and felt the café dissolve around him.

He loved Nueva York. Sure, it was intimidating at times (the buildings were larger-than-life and some people looked as if they’d never laughed before in their lives). But he was always surrounded by food ― savory halal food sold from carts, pizzas the size of a kitchen table, California rolls from delis, creamsicles and ice cream cones covered in crunchy chocolate in Central Park. His favorite place of all, however, was a bodega just a few blocks away from the café. There, he could chat with the guys behind the counter, buy a stack of pupusas, and take a swig of grapefruit soda.

Every other day, he would take some pupusas to Mrs. Mitchell, his English teacher. She taught him English and had heard every single one of his frustrations. Pineapples aren’t apples, so whose bright idea was it to call them pineapples? Fortunately, the lessons were more tolerable over slices of cheesecake and Mrs. Mitchell’s pointers, and as months passed by, the Mitchells were just like family.

And, of course, his friends.

He smiled just thinking about his friends here. There was Andrew, a sandy-haired boy down the street who helped him with homework and had a bright red drumset. Then there was David, Steven, and Sam, who all worked at a 7-Eleven; Vanessa, who was always at the library; Luís, who could never stop talking about his cousin who played for the Pirates; and Stacy, a star soccer player. He went everywhere with them. They would get doughnuts or pizza and then see a baseball game.

Afterwards, they’d split up, and everyone went home before dusk.

Everyone except him, anyway. He would go to the café and sweep or do dishes and clean tables. When he was confident enough with his English, which was not often, he’d take orders. During breaks, he would toil over his homework and arrive at his apartment around midnight.

He couldn’t really say it was his apartment. He shared it with a few kids his age that he never really saw. They were in and out, working at the point between late at night and early in the morning. Some days they went without power, which only served as a reminder that they had to keep working.

Working. Just like he had back home, if home was still there.

Then there was the other El Salvador: the one that had witnessed civil war. The one that had seen massacres, burning buses, alleyways littered with propaganda. And just like that, he felt his heart jump into his throat. He could relive every part of it — every gunshot in the night, every lash his father had gotten for resisting the rebels, every time he’d gone to bed on a cot he shared with two of his brothers wondering if he would get to wake up in the morning. He remembered when fear and hunger were a disease and everyone was infected. He remembered when being outside at night was deadly.

That never stopped his family from working. After all, he had eleven siblings and his family had a farm to keep up. At seven, he sold oranges. At twelve, he picked coffee beans. By the time he was fifteen, he was working several jobs at a time. Newspaper headlines grew more helpless, but his family rolled up their sleeves and worked harder. They had no other choice.

And in the midst of this, there was America. He’d caught glimpses of America in pictures of neat little houses, on the radio, and in hushed, excited conversation. He’d heard of one place in particular: Nueva York.

That was where everyone came together, where skyscrapers sprouted like sunflowers, where you could work hard and get everything you wanted in return. Day after day, everyone was filled with dreams of America, of picturesque houses, of crowded restaurants.

Time passed and civil war worsened, growing bloodier as time went on, until it was clear it was not safe to be there. In the middle of the night, he packed a bag, and said his goodbyes, in a trancelike state of disbelief. “Please don’t cry,” his father said. “Soon we’ll be in America with you, I promise.”

He traveled with a group of strangers, all bleary-eyed and speaking in varying tones of anxiety. These strangers might as well been his closest and dearest friends — they learned to rely heavily on each other, and stayed together, ready for anything.

And then, he was packed into a California-bound pickup truck with a tarp tied over it. He was squeezed alongside two other teenagers; three desperate sardines in a can.

The tarp lifted and he was face-to-face with officers. He didn’t mind. For the first time in a long time, he had enough food to eat, even though it was in juvenile detention.

After days of uncertainty, he found himself in court, standing in front of the judge, a dark-haired woman with an icy voice.

Other people would take the judge’s place to ask him questions.

“Why are you here by yourself at such a young age?”

I could not go with my family. I came here with a few friends.

There is a war in my home country. My parents told me I had to leave so I could be safe.

“Where are your parents?”

There was a brief recess, and in twenty minutes, the judge emerged.

He was free to go.

After that, he was on a plane, scheduled to arrive at LaGuardia Airport in the morning. His eyes were glued to the window, squinting at clouds so white his eyes watered. At night, he could hold cityscapes in his palm and wrap highways around his pinky finger. And when he landed, his breath caught. There were so many people.

With the help of a few people at a desk labeled “Management,” he was on his way to his new home in Nueva York.

It was hard to believe it had been over a year since then.

He loved Nueva York, he really did, but he missed everyone in El Salvador dearly. Looking back, he felt weak. Why did he leave everyone behind? Couldn’t he have found a way to take them with him? They would love America. They’d love the baseball games, and the buildings, and the food ―

“Hey, are you okay?” The blueberry doughnut waitress tapped him on the shoulder. “You’re on dish duty today.”

“Okay,” she replied, giving him the friendliest smile she could manage. “Have a nice night, I’m headed out.”

He would find a way to see them again. He had to. Tonight he’d study harder; tonight he’d work harder. He remembered his father’s promise, the judge’s abrasive tone.

Why are you here?

He knew perfectly well why he was here.

Here he could be someone else. Someone with una nueva vida. 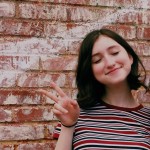