Premiere & Interview: Indie Band Superet's "How To Work A Room" from their Upcoming Album
Advertisement 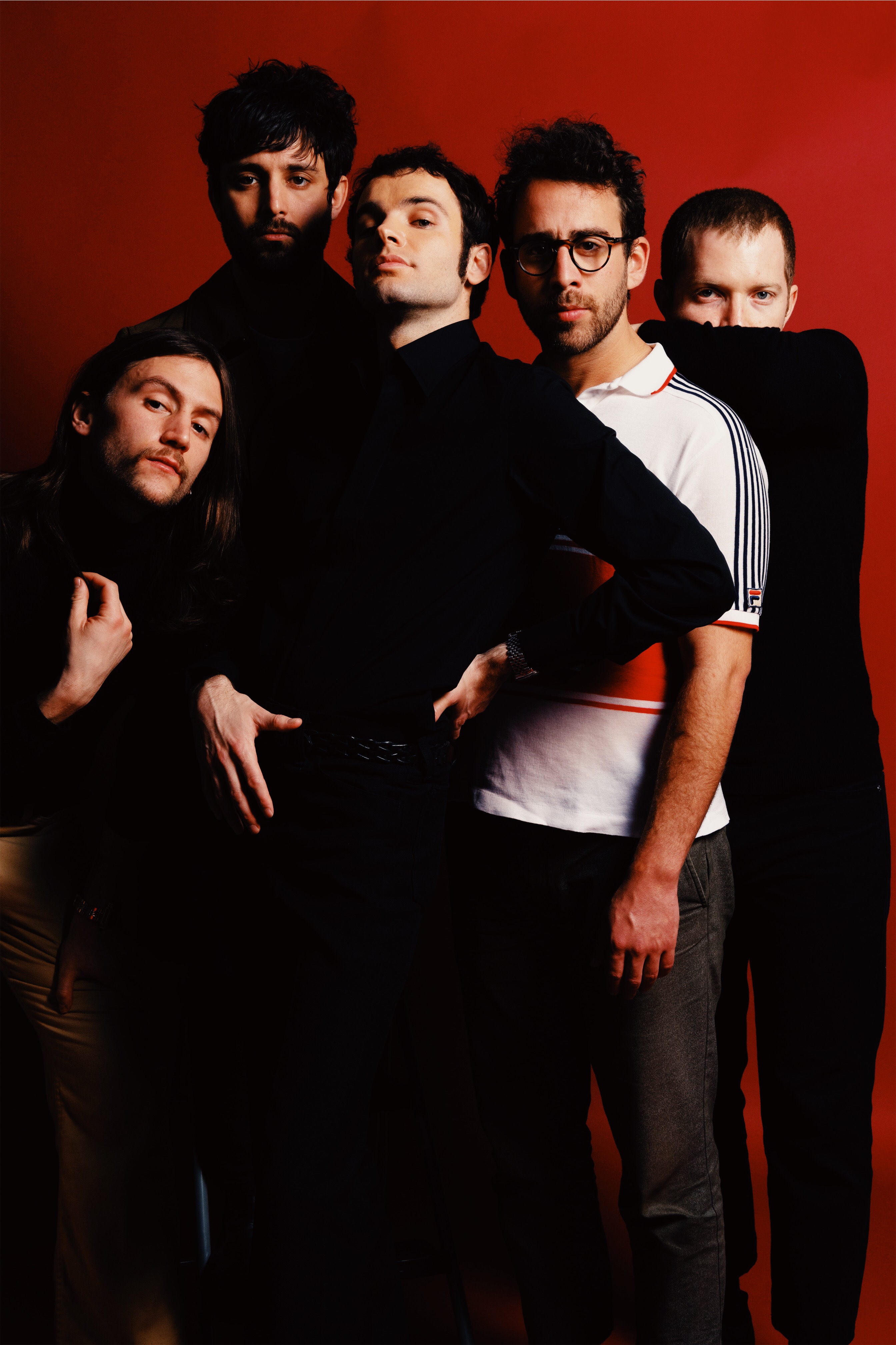 Superet is an indie band from California that makes music with a unique sound, despite the fact they have been mastered by industry pros such as Dave Fridmann (from Spoon, MGMT, Tame Impala). Their debut single “Pay It Later” premiered on Zane Lowe’s Beats1 Radio show on Apple Music in May 2017, before they went on to tour with DREAMCAR. They then went on to tour with Gang of Youths. They now prepare for their own show (dates at bottom of interview). Their music has received great praise, and with great reason.

Their music is a blend of genres and generations, creating catchy and sharp songs. They are debuting their live studio performance of their song, “YDS2M” from their upcoming album “How To Work A Room.” The band shared, “Director/Editor/ Ethan Berger and Cinematographer Stefan Weinberger have been good friends of ours for a long time. They did an incredible job at taking a simple concept and making it a pleasure to watch all the way through. We hope to work with them on larger video projects soon.” I got the chance to talk with the band and learn more about them, their album, and how LA cults have impacted their band.

What was your experience like touring with DREAMCAR and Gang of Youths? Were they similar experiences or different? How did these shape you as a band?

Both tours were pretty different. Dream Car is Davey Havoc of AFI backed by No Doubt minus Gwen, so you can imagine people were quite excited to attend those shows. It was a surreal first tour experience. They were so generous to have us join them, and they were really good people. Davey would come into our dressing room after every gig and shower us with compliments. He’s very strong and handsome (“lol”).

The Gang of Youths or should I say “hang of youths”, was a lot of fun too. That run was on the west coast. They’re from Australia, and if I remember correctly this was one of their first US tours. Some of these shows were really small and there were only had a hand full of people in the crowd, so coming off the Dream Car tour we had to shift gears a bit when it came to our performance. We decided that regardless of how many people were in the audience we needed to play as if it were our last. I started wearing these red high heel Chelsea boots on this tour and one night I jumped off the stage and snapped a heel right off. I got up and hugged every person in the crowd individually … all five of them.

How did it shape us as a band? It showed us that regardless of the room, no matter how pristine or shitty the sound system, or how many people are there, we have a responsibility to put on a show and bring as much energy as we can regardless of the circumstances. We learned “How to: Work a Room”.

We’re really lucky to have had these experiences and we love both of those bands, if either of them is reading this, THANK YOU GUYS FOR HAVING US!

How does your EP differ from your album?

The EP was a mish-mosh of songs that I had written before we officially started the band. We recorded them at Vox Studio’s in Los Angeles and at our home studio with producers Gabe Wax Michael Harris and Sean O’Brien. I remember at the time listening to Cocteau Twins, R. Stevie Moore, Roxy Music and a lot of Brian Eno’s early work like “Here Come the Warm Jets” and “Taking Tiger Mountain by Strategy”. The general idea was to write pop songs and dress them up as electrifying experimental soundscapes.

The process of making the album was very different. We had a lot more time to dive into the details of production and songwriting. We decided to take a maximalist approach to the sound. Being our first album we wanted to make a big statement about what we were capable of, and working with Dave Fridmann in Fredonia, NY was a dream that somehow came true. We spent a total of 4 weeks in his studio which is surrounded by miles of cornfields and nothing else. We were totally isolated with zero distractions, which really gave us an opportunity to focus at the on the details we were looking for. Here’s my spiel about the album: As we enter the “room” in which this album exists, we carry with us a few things in common. Tales of heartbreak, isolation, confusion, and desire. How to Work a Room is an audacious title that assumes that we (Superet) know how, and are capable of teaching you, the listener, how to work a room. But the truth is, we cannot. It’s a chaotic and terrifying risk you must take on your own. The age of the conversationalist and the art of socializing is in rapid decline. Spontaneous thinking has been replaced by thumbs and seemingly endless opportunities to edit. The average attention span is dissolving by the second, and we are more anxious in social settings than ever. Our daily lives are filled with rooms. In each one a potential risk. Our minds and bodies are designed to improve with disorder. Take the risk, embrace disorder, work the room.

?Look through his spectacles and into those dreamy brown eyes. They will teach you that something new is coming tomorrow, and that you are loved. ?

What was it like working with Dave Fridmann, who’s such a distinguished member of the music industry?

Working with Dave was one of the great honors of our lives, and I can speak for everyone by saying that. I mean, the man has worked with some of our favorite artists and made some of the most incredible sounding records. “The Flaming Lips” “MGMT” “Tame Impala” to name a few. (Whoops, I dropped a few names there) He challenged us to make choices in a way no one else ever has. He’s always searching for sounds that no ones ever heard, and he has no interest in being redundant. He’s got this test called “The Glass of Milk Test” where he finishes a track, plays it in the monitors and leaves the control room to get a glass of milk. If he doesn’t hear anything that makes him go “wow that was really interesting” before he finishes his milk, then the track isn’t finished. He’s a mad scientist with the demeanor of a wholesome family man. He even hires his son Mike aka “Hot Mic” to assist in the studio. I hope we can work with him again.

Who are your main influences?

Influences… hmmm. Well seeing as I mentioned a few already I’d rather talk about what I’m feeling inspired by at the moment. I’m really interested in people and relationships, how we affect each other especially in modern culture. The digital age has got me feeling very strange as an artist. I’m really curious to see where this all goes, where are we headed, do we know? David Bowie had it right when he asked: “Where are we now?” Do we care? I do, a lot… if there’s anything to talk about, write about, sing about right now it’s how rapidly the world is changing right in front of us and how little we question how quick we are to make colossal changes without always thinking about what the impact may be.

Matt, can you talk about the date tattoo you have?

I have a poorly healed tattoo on the inside of my right arm of a simple heart I drew with the date 2/14/16. That’s Valentine’s Day for all you lovers out there. It marks the date of Superet’s conception.

Thank you for all the kinds words yesterday. “How To Work A Room” is available everywhere. TONIGHT is the last show of our tour with @idkhow . It’s been an incredible ride. Let’s blow it out tonight in Minneapolis!

There seems to be a nostalgic element to your style of clothing and music? Is this intentional?

I’ll take that as a compliment! Nostalgia seems to be an identifying characteristic of our generation… The past is something that people like to make reference to these days more than ever. Maybe we feel a bit lost with all these rapid advances in technology. I don’t know… For me, it’s just a matter of taste.

In Latin, Superet means “to exceed” (at least in my studies) and on Apple Music, it has been listed as “to overflow.” What inspired this name?

To exceed to overflow, ya that’s Superet. The word is Latin and I took it from a cult church I drove by one night here in Los Angeles. “Superet Church of Light”… something about “Mother Trust” and the “Prince of Peace”. I’ve always found the occult really fascinating, there’s something eerie and exciting about people who challenge the norm. When we first announced ourselves, a Superet church goer reached out and tried to stop us from using the name. I really ought to go to their next Sunday service and see exactly what it’s all about but I’m slightly concerned if I do no one will ever hear from me again.

Remember this? No…? Worry not! This gig has been immortalized in @liilytheband ‘s mini doc which is out now via @applemusic go check it out! #frozen #eternal #brekfest

You can stream their latest album, watch their video, and catch them on tour:

An Interview With Brianna Zúñiga: The Podcaster Behind “What Does She Know?”