With a slow, enchanting acoustic guitar and airy vocals, Raveena welcomes us to her debut album Lucid with the appropriately titled opening track, “Hypnosis.” Raveena Aurora, a New York-based R&B artist probably best known for the song, “Honey” and her performance on the music channel, Colors, returns with her debut album which is almost like a soundtrack for a daydream. Her angelic vocals, as are always incredibly soothing and ethereal which makes the album an experience you have to sit down and listen to all in one go, preferably not on shuffle as she carries you away to another dimension. While following the recent trend of beats reminiscent of the 90s and airy vocals, Raveena’s debut is a unique, blissful exploration into self-acceptance and love. 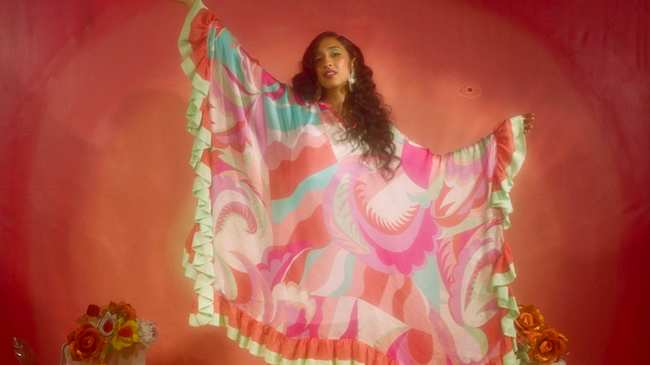 Raveena lulls us into the album with the opening track, “Hypnosis,” which prepares us for the transcendent experience that is nectar. Her inspirations from David Lynch and Hayao Miyazaki are obvious here, making for a calming, soulful experience. The lyrics are relatively short and reminiscent of the poetry of Rupi Kaur but this doesn’t take away from the experience. In fact, it makes listening to the song more heavenly and enchanting. The track that follows, “Stronger” explores mental health in a very slow, healing voice with a low hum in the background. There’s something forlorn in Raveena‘s delicate voice, which kind of makes me want to cry but in a good, comforting way. The first time I listened to this, it took me almost twenty minutes to move on from “Nectar” and “Stronger” because I kept replaying it. This album was my first time listening to Raveena, yet I was already addicted to her sweet, “Nectar-y” vocals.

“Salt Water” begins in a very cinematic way, opening with violins which remind me of Janelle Monae‘s “Don’t Judge Me,” but reveals itself to be a delicate song. Raveena‘s airy vocals and the jazz influences definitely make this song one of my favourite if not my favourite song on the album. The lyrics are about physical and emotional trauma which is contrasted against the backdrop of a cheerful piano and lo-fi beats which makes it haunting, in a way. Raveena‘s singing turns into humming before leaving us in a few seconds of silence, to contemplate the lyrics.”Stone” is perhaps even more delicate and the first time I listened to it, Raveena‘s sweet vocals and lyrics almost bought me to tears. Her voice is almost a whisper against the blissful chords and the steady, tranquil drums. “Stone” lasts for around 5 minutes but I wish it lasted longer, even with the reprise that follows. The reprise is otherworldly and dreamy, with subtle strums of a guitar and hymn-like vocals.

The second half of the album begins with “Mama,” a song dedicated to Raveena‘s own mother and immigrant mothers everywhere. She ponders her mother’s life before marriage and wonders what her dreams were before getting married and having a family. In an interview with Vogue, the Sikh-American singer said that she “wanted to look more deeply into the unique relationship we have as a first-generation immigrant.” The music video of the song features Raveena‘s own beautiful mother and grandmother as well as other immigrant mothers and their children, adding to how magical the song is. The following song, “Bloom,” reminds me a lot of some songs on Kali Uchis‘ album, Isolation, but probably a lot more subtle and minimalistic. “Bloom” is a more conventional love song which I feel is required after the emotional rollercoaster Raveena has just taken us through. Other than “Salt Water,” this is probably another favourite one of mine. The heartbreak and sadness of the previous songs become self-love in “Bloom,” which is perhaps where it got its title from.

“Floating,” featuring the talented Hope Tala is minimalistic in its lyrics which could show the clarity Raveena has reached after “Bloom.” It kind of reminds me of Solange‘s “A Seat at the Table.” The song is cheerful and psychedelic, almost which I really love about it. The song makes you feel almost as if you’re dreaming or “Floating,” as the title suggests which is really cool. “Still Dreaming,” is almost an extension of “Floating,” and is probably a more ‘conventional’ love song that still sounds as angelic and enchanting as the previous songs of the album. The song is followed by “Nani‘s Interlude” [‘Nani‘ means maternal grandmother in Hindi] with some words of wisdom spoken from Raveena‘s own grandmother, telling us to appreciate our lives while they last.

The album concludes with “Petal,” a song about self-love and nature. Raveena has taken us on a journey through emotional and physical trauma to self-acceptance and love, ending the album with this healing, captivating song. It’s not as bold as songs like “Honey” and “Nectar” are but that’s what I like about it. The song is simple and minimalistic but it’s lyrics and melody stay in your head a long time after the album has ended. Because of the journey the album takes you on, this album is something you have to make time for, to sit and listen to it in its entirety and feel the emotions that Raveena felt. In its own subtle and beguiling way, Raveena Aurora’s album is powerful and memorable.

Lucid is available to stream on Youtube, Spotify and Apple Music