Ren Hang and the Debate About "Political" Art
Advertisement

February 24th, 2017: famed Chinese photographer and poet Ren Hang took his own life, and the art world was never the same. He was only 29 years old.

On his website, Ren had frequently been updating a section called “My Depression“, where he openly discussed his longstanding battle with the mental illness (English translations of his last 10 entries may be found here). There, he also posted his poetry (in Mandarin Chinese–English translations of his last few may be found here), which offered many insights into the photographer’s thoughts and feelings–particularly about love–and his troubled mind. And then there was, of course, his photography.

Ren gained renown and notoriety the world over for the provocative eroticism, explorations of sexuality and gender, and the strange, arresting beauty that was showcased in his photography. Due to the fact that he often shot his subjects in the nude, Ren had been involved in many run-ins with PRC police: he had faced multiple arrests over the course of his career and was prevented from exhibiting his work in the country.

This gave him even more international attention, as it tied his work to the repressive censorship it often faced under the Chinese government–attention which Ren, and a few other commentators, have debated, since it tended to focus on China’s censorship politics rather than the personal vision and themes–without any socio-political context–inherent in his art. Nevertheless, given the subversive nature of his work, one would be hard-pressed not to interpret it as fundamentally political–a rebellious undertaking in and of itself.

A self-taught photographer, Ren started dabbling in the craft in order to stave off “boredom” during his days in university in Beijing. “It was really boring in college,” he once told Autre magazine, stating that what he was studying there, advertising, was also “boring”. In the interview, he states that he was around 17 or 18 when he started out, and began by taking photos of his friends, often in the nude. Even later into his career, he states that some 70% of the people in his photos were his friends, and the others were fans; he tended not to shoot models he didn’t know because “strangers make me nervous“.

Ren has also stated that a major inspiration was Japanese avant-garde writer, director, and photographer Shūji Terayama, who was also well-known for his provocative work. In juxtaposing Terayama’s work with Ren’s, one could clearly see the same kinds of experimentalism and maverick approach to art which both artists share: an obsession with the subversive combined with a sense of playfulness and oftentimes eroticism.

Sex is a taboo in China. It’s not something that’s openly talked about. Why can’t we talk about sex in public? Are nude bodies shameful? We ought to be proud of our own bodies. Or at least cherish them. Our existence is worth valuing. (source)

Ren’s work was often lauded by magazines, newspapers, and fellow artists for being radical and revolutionary, as it appeared to take a strong anti-censorship stance under a repressive government–a bold move in a country where political dissidents, including artists, have been arrested for criticising the government. Ai Weiwei–one such artist who had, famously, been arrested, was a fan of Ren’s from very early on, and had even featured his work in an exhibit in the Netherlands in 2013, and also curated his work for a 2014 Paris exhibit.

Perhaps one could see why his work was political, given some of the comments he had given about why he pursued his work. “I don’t want others having the impression that Chinese people are robots,” Ren had once told the British Journal of Photography.

However, Ren has also been reluctant to confer any political motive behind his work. He once told The New York Times, “I don’t really view my work as taboo, because I don’t think so much in cultural context or political context. I don’t intentionally push boundaries. I just do what I do.”

Indeed, there is something very personal about his works; it gives away a sense of vulnerability, an air of “sadness” as described by fellow artist Ai Weiwei in an interview with TIME magazine. We might never know what exactly he intended all of his photographs to mean, as he often denied that they had any deeper meaning. Yet they simultaneously held a sense of individuality, of not caring about societal impositions, whilst being acutely aware of what and who was impeding his art.

My pictures’ politics have nothing to do with China. It’s Chinese politics that wants to interfere with my art. – Ren Hang in an interview with Dazed

Often lost in the conversation about Ren’s, and indeed, many contemporary Chinese artists’, works–a conversation inundated with thinkpieces that project Western values of liberalism and reflect Western, often American, desires of imposing soft power politics upon China–was the value of his work as it was, and especially the skill and eye for aesthetics which it demonstrated.

Light, colour, form, and contrast are manipulated and taken into account with a sensitive eye for detail, in a way that captured the essence of the subject and the setting with a sense of clarity and, without a doubt, Ren’s own personal vision. The juxtaposition of nature–whether it be natural settings or flowers or even live animals–against the human body was arresting, fresh, and unlike any other: a rarity amongst his contemporaries anywhere around the world. Themes of the organic, of the physical body, and the relationship between the natural, the urban, and the surreal permeated many of his photographs.

I just photographed things on their more natural conditions. – Ren Hang in an interview with Medium

Stark, well-lit shots, exposing every square centimetre of his subjects’ skin, celebrated nudity, love, and sexuality. Close-ups of faces, body parts, and even genitalia–which, despite being “pornographic” as the artist himself described, often gave off an enigmatic, yet celebratory air: an ambiance that has captured many around the globe. Small wonder, then, that his works have made it into exhibitions pretty much everywhere you can think of, from New York to Tokyo, to Bangkok to Antwerp, and indeed, even in Beijing.

Still, in a country where the government has been notorious for its extensive, authoritarian censorship and questionable stances on the LGBT+ community, that personal vision which often translated into content which was deemed “illegal” was inevitably going to be political. Sexuality, gender, and love are all explored in his photography, which Ren insisted reflected what the reality of China was, and yet was obstructed from full expression by the government.

Strange, surreal, shocking, and yet gorgeous and unforgettable, Ren’s photography was revolutionary even if you take away the political context with which it had been inevitably entangled in. No matter what political context it was surrounded by–which no doubt added an extra layer of significance to his work–Ren’s work should be celebrated for the self-empowering attitude it embraced, encouraged, and indeed, engendered not only for Ren himself, but for many, many other people. It was revolutionary because it changes the way we think about expression, reality, and liberation; about our perceptions of other countries and how the people who live in it are like, thus inviting us to refine and balance our views on what we may have previously held as true.

To us, the photographs seem otherworldly and unreal. But as Ren stated, it depicted life as it was in China; a side of it that we couldn’t see, couldn’t imagine due to political forces trying to obscure it. But no longer: Ren was happy to show us just what it was like without a care for who was trying to stop him. And that makes his pictures, already universally enticing for their aesthetic beauty, all the more courageous and all the more relevant given the socio-political forces opposing it.

Yet at the end of the day, Ren Hang’s photography was about someone who was able to express himself in his work and find joy in it, even for a brief period of time.

I think all I could do is, live to your life to the fullest as long as you’re happy, that’s it. – Ren Hang in an interview with Medium

Ren Hang’s work may be viewed on his website. All photographs featured in this article by Ren Hang.

In this article:in memoriam, ren hang
Up Next: 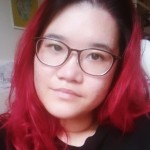 Alexine is 19 and an undergrad in Tokyo. When she's not frantically trying to meet her deadlines you can find her selling out the post-punk revival sections of secondhand CD shops or chilling in a quiet Saigon café.