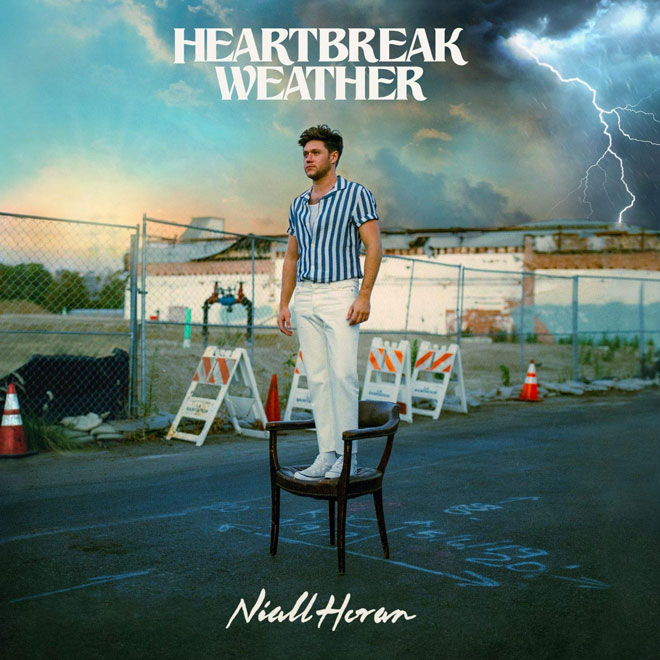 Irish musician Niall Horan may have become a household name during his time in One Direction, but he’s kept all eyes on him long after the boyband’s demise. When the band’s hiatus began in 2016, Niall began making his own music and establishing a completely independent sound.

No longer the bleached-blonde young boy of One Direction, Niall Horan has not stopped surprising people since his departure from his boy band. He’s opted for a folksy, country sound on his debut solo album “Flicker” (2017), launched a golf management firm and took on a private lifestyle.

“Heartbreak Weather,” the title track to the album, commences with a fierce 80s groove. Heavily 80s-inspired synth kicks off the project. Niall sings about holding someone and feeling electricity — “sparks.” With bopping guitar and synth backing him, Niall sings about someone helping to break him away from his patterns.

Standout Lyric: “All of my life, I’ve been sleepwalk livin’/Runnin’ around the same bars I’ve been in It can be so lonely in this city/But it feels different when you’re with me.”

Standout Lyric: “Yeah, I see us in black and white/Crystal clear on a starlit night/In all your gorgeous colours, I promise that I’ll love you for the rest of my life.”

“Dear Patience” opens immediately, with Niall singing, “Dear Patience” before the background instrumentals are introduced. The track is tentative and nervous, with plucking guitar to match. Niall calls on himself to be slow and not rush towards things. The chorus is emphasized with swinging tambourine and an echoey background choir, but the nerves of the letter-like song are not absent as Niall croons.

On “Bend The Rules,” Niall sounds tired and wounded. He sings about knowing someone is hurting him, but not wanting to be cruel or dramatic in return. Throughout the song, Niall shares intimate details about the unhealthy nature of what remained of his relationship. Paired with slow piano and percussion, Niall never explicitly states that he was cheated on, leaving the song open to the possibility that his partner had an emotional affair.

Standout Lyric: “Someone makes you laugh, I can’t help but ask/But you won’t say what it’s about/I pour myself a glass, it won’t be the last/Just our medicine for now.”

“Small Talk” is all about skipping the chatter. This track is a more mature song, similar to his 2017 hit “Slow Hands.” Consistent percussion and twinging guitar, with chanting lyrics, set a scene.

Standout Lyric: “I’ve been thinkin’ what I’d do when I’m alone with you/Just say nothin’, small talk only gets in the way.”

Nice To Meet Ya

Arguably the most famous single off the album, “Nice To Meet Ya” had lots of listeners happy to meet Niall. Spinning guitar, piano and percussion created a sound that was simply fun. Niall sings about the hunt for one elusive person.

Standout Lyric: “I like the way you talk, I like the things you wear/I want your number tattooed on my arm in ink, I swear.”

Put A Little Love On Me

Standout Lyric: “When the lights come up, and there’s no shadows dancin’/I look around as my heart is collapsin’/’Cause you’re the only one I need/To put a little love on me.”

Arms Of A Stranger

“Arms Of A Stranger” makes it obvious that this album is telling a clear story. The song brings clarity to the fact that the beginning of the album marks the beginning of the relationship when everything is bright and new and positive. However, it is clear at this point that Niall has met the point of possible break-up, after the struggles introduced by previous tracks. On “Arms Of A Stranger,” which is full of both passion and percussion, Niall is trying to recover from the relationship despite being with someone else.

Standout Lyric: “You left me with nothing/Now I’m lyin’ in the arms of a stranger/But why do I think of you?”

Clapping and constantly building, “Everywhere” expresses the consuming and inescapable nature of the relationship from which Niall is trying to recover. The song sounds almost positive, as if through having memories of his ex everywhere, he can be slightly happy he’s not alone and without them.

Standout Lyric: “Feels like every time I turn a corner, you’re standin’ right there/Over my shoulder, you’re everywhere/I swear it’s hard to think, it’s hard to breathe when you’re in the air.”

“Cross Your Mind” is Niall acknowledging the fact the person he cares for will continue to hurt him with no regard for his feelings. The percussion on this song pairs expertly with the bouncing guitar, fading in and out. Self-aware and slightly annoyed, Niall sings about being hurt by his lover.

Standout Lyric:  “And give me all the pain, give me everything/Don’t hold back, don’t hold back/Leavin’ me in pieces, but I swear it’s worth it every time/And it doesn’t even cross your mind.”

Snappy guitar and deep longing make “New Angel” a song all about finding someone new to replace the past hurt. This track is similar to “Heartbreak Weather” where Niall sings about someone being the person who makes him feel good. It’s also like “Cross Your Mind,” where he sings about his ex running free. These connections emphasize Niall’s perceived need for someone else in his life.

Standout Lyric: “Each time I close my eyes, she’s in there running wild/I’m hoping you get her out of my mind.”

A bouncy, teasing hit single, “No Judgement” is all about promising to be the person who can offer no scrutiny. The song’s summery sound makes this hit the sunshine in a bottle that this half of the album needs.

Standout Lyric: “When you’re with me, no judgement/You can get that from anyone else/You don’t have to prove nothin’/You can just be yourself,” declaring “No Judgement” to be his recovery song.”

Simple piano and dulled background percussion come together on “San Francisco.” On this song, Niall is clearly happy to have had certain experiences but simultaneously hurt to have lost them. “San Francisco” is as personal as the name — Niall wrote the song about his time in the city. It’s ultimately a bittersweet tune.

Standout Lyric: “Now I can’t let go of you I might show up on your doorstep, soakin’ wet/Say I’m done runnin’ from the one that I want so bad.”

Guitar strumming and vocals, paired with little else, makes “Still” a somber conclusion to Heartbreak Weather. The song’s name, lyrical content and instrumental composition are as simple as its meaning. It’s about still wanting to be with someone, even after the healing process that Niall outlines on the entire album. The final track to Niall Horan’s second album, “Still” is raw and heart-wrenching.

Standout Lyric: “So tell me you want it/A thousand miles away from the day that we started/But I’m standing here with you, just trying to be honest/If honesty means telling you the truth/Then I guess we lost our focus.”

You can stream “Heartbreak Weather” everywhere!

Featured image courtesy of U Music

In this article:album review, niall horan, One Direction
Up Next:

Lauv Brings his One Man Boyband to Life With His Debut Album ~how i’m feeling~ : Review

Lauv Brings his One Man Boyband to Life With His Debut Album ~how i’m feeling~ : Review