International Korean boy band Monsta X just had their worldwide comeback with the album Take.2 We Are Here and the music video for their title track, “Alligator.”

Take.2 ‘We Are Here’ is a continuation of Take.1 ‘Are You There?’, which debuted at #7 on Billboard’s World Album Chart last October. Take.2 ‘We Are Here’ consists of 10 tracks, one of which is a collaboration with two-time Grammy nominated DJ and Producer Steve Aoki, and emphasizes the theme of finding hope between loss and wondering.

These days in the Korean music industry, we’re seeing members of their respective groups having a bigger role in the composition of the lyrics and production of the album. Monsta X rappers, I.M and Joohoney, both participated in co-writing the Korean lyrics for 8 out of the 10 tracks on this album and singer, Wonho, shines with the track “No Reason,” as not only a lyricist but producer and arranger as well. With this album, we are introduced to a side of Monsta X that we may not be used to but we’re all here for it. Here are our thoughts on Take.2 ‘We Are Here.‘

“INTRO: WE ARE HERE”

When you first listen to the intro of Take.2 ‘We Are Here,’ it feels like you’re stuck in a trance listening to the lead rapper, I.M, narrating in this track. I.M has a smooth voice, which is pleasing to the ears and which in turn kept me in a trance. There is an amazing build up within this track, and the heavy bass in conjunction with the people taking in the breaths and almost animalistic shouts to drop the beat is very impressive. The use of the time ticking in the song to keep the beat throughout the song is an amazing production choice. This track is only a little over a minute but it’s honestly so good. I’m left wanting more from the intro of this album. I didn’t want it to end.

“Alligator” is the title track of Take.2 ‘We Are Here’  and I’m definitely impressed. The song starts off very hard and dramatic which is something I’ve come to love with Monsta X as they tend to incorporate these type of stylistic elements into a few of their songs. Although “Alligator” may be a hard-hitting track, the vocalist’s voices (especially Kihyun’s) are so smooth that it makes you think twice about the sound of the track. The smooth voices of the vocalists in conjunction with the overarching powerfulness of the track go well together. Jooheon and I.M do an exceptional job with their parts in the song, both on their own during the verses and together during the bridge. I felt like on was on a rollercoaster when Jooheony and I.M did the bridge together and then Kihyun came in with the high note.

Monsta X didn’t come to play with this track and the visuals in the music video are out of this world. Alligator being the title track for this album was an awesome decision as I can’t stop singing this song. The group is currently promoting the title track on various Korean music shows and they’ve already won four times. It’s safe to say, the public is a fan of this track.

The start of “Ghost” threw me off a bit as I wasn’t expecting that from the group, but this track is actually one of my favourite tracks off the album. The whisper-like ‘Ghost Ghost Ghost’ that is repeated multiple times within the song keeps on ringing in my head after the song is finished and I think this is purely their intention. The song has a very eerie feel to it and it feels very intimate especially with the ASMR that is happening within the song. It’s almost like the members are breathing down your necks whispering ‘Ghost Ghost Ghost.’ This track is very interesting and unique which I truly appreciate. It’s something new and fun from the group which I love.

Play It Cool is a collaborative track between Monsta X and Steve Aoki. This collaboration resulted in a very clean and stylish track. The track has a very late night roller rink feel to it. That was a very specific description but I can imagine myself on my roller skates dancing to this song with my friends and having a bomb ass time. It’s definitely very different from Monsta X’s normal music style, but I’m a fan of it. We get to see the group experiment with a sound that they may not be used to as well as the fans.

“No Reason,” just like “Play it Cool,” is a song that shows Monsta X departing from their typical style and presenting us with a more soft, pop EDM-ish sound. It’s not the group’s typical sound – while the classic Monsta X percussion is present in the song, the rest of the instrumentation of the track is quite soft. The soft instrumentation in conjunction with vocalists’ beautiful high notes makes me feel very warm. Nothing in this song was overdone, the rappers still had the moment to shine in the track, and it wasn’t too powerful or dominant for the track. It fit just well.

Without a doubt, the chorus of “Give Me Dat” is my favourite. Everything flows well and it isn’t too powerful or hard-hitting but still fits the style that millions of people fell in love with Monsta X for. Everything about this song is just right. We return to the music style that we’re used to from Monsta X after tracks like “Play It Cool” and “No Reason”. I’m a big fan of the ASMR that was incorporated into the track. It just makes everything feel more intimate.

If I’m being very honest, I wasn’t a fan of this track. I loved the chorus as I was so drawn in and Jooheony’s and I.M’s rap but not being a fan of the instrumentation for this song didn’t allow me to enjoy the track as much as I thought I would. With “Turbulence,” I expected a lot more from the song because of the title. I expected the instrumentation to go super hard which didn’t happen which left me a bit disappointed. Nonetheless, the chorus is of the track is amazing.

This is something I was not expecting at all. The track starts off with Spanish guitars and then progresses into a track that is super intense and hype. I’m definitely a fan of Jooheony’s vocals after the group all says “Boom.” This part of the song is super memorable and it’s left me singing ‘Boom’ and Jooheony’s lyrics all day long. I feel like this track definitely suited Jooheony vocals the most. This is definitely a song I’d listen to when I work out. I didn’t think I’d like this song but I must say it’s one of my favourite tracks off the album.

The beginning of this track is slow and starts with a heartbeat and someone cocking a gun which is very intense. We’ve seen quite a few moments of intensity throughout the album, but the intensity present in this song is quite different compared to the others. The ‘Dang Dang Dang…’, ‘Bam Bam Bam…’ in the pre-chorus and the repetition of the title in the chorus was extremely addictive. I’m not entirely sure what to feel about this track. I like aspects of the track especially I.M’s rap and the beautiful harmonies that are displayed by the group but other than those aspects, I’m not a big fan of the song.

“Party Time” is the track that closes the album. The track starts off very chill and I imagine myself listening and dancing to this song with friends just having a good time. I liked the melody of the chorus and ‘Dalala-lala-lalala’ hook that follows the chorus. With the title of the track, I expected the song to be more of a party anthem which it isn’t but I’m definitely a fan of the track and it has a spot in my favourite tracks of the album. It’s a beautiful song, and what better way to close off the album with a beautiful track?

Fans are also loving Take.2 ‘We Are Here.’ Max, 19, from the U.S., says, “This album is honestly super diverse and it’s not just one collective genre. Monsta X is technically in the genre of K-Pop, but with the different musical elements in this album, it can’t be confined to K-Pop. I think Monsta X, next to BTS, has one of the most diverse ranges of vocals and rap talents in the industry right now. Looking at the tracks, I’d say ‘Alligator’ and ‘Party Time’ don’t even sound like they’d be on the same album, much less from the same artist, but I really like the way both these songs fit the vocalists and the rappers of the group. Watching the ‘Alligator’ music video, I think that they’re finally finding not only their clothing style but also their music style as well.

“My favourite song from the album is probably going to be ‘Party Time.’ It’s the last track of Take.2 We Are Here, and I really like the beat and flow of the song. It reminds me of an intro to an Olivia O’Brien song and I’ve listened to her for some time now. I’ve always liked songs that have a slow build up but then you also have songs like “Rodeo” where it’s not even close to what you’re expecting and even though you don’t expect it, you still become subsumed with the song. Take.2 We Are Here is an amazing album that is so diverse, there’s definitely a song on here for everyone to enjoy!” they say.

Take.2 ‘We Are Here’ is an amazing album and I definitely enjoyed listening to the album countless times. I’ve seen that this album was not a lot of Monbebe’s favourite compared to the group’s other albums and I can understand why they would say that. Nevertheless, Take.2 ‘We Are Here’ is a beautiful album and we get to see the group experiment with different music styles which I truly appreciate.

For all fans of Monsta X, they recently announced their World Tour that they’ll be embarking on starting from April and they may be coming to a city near you! 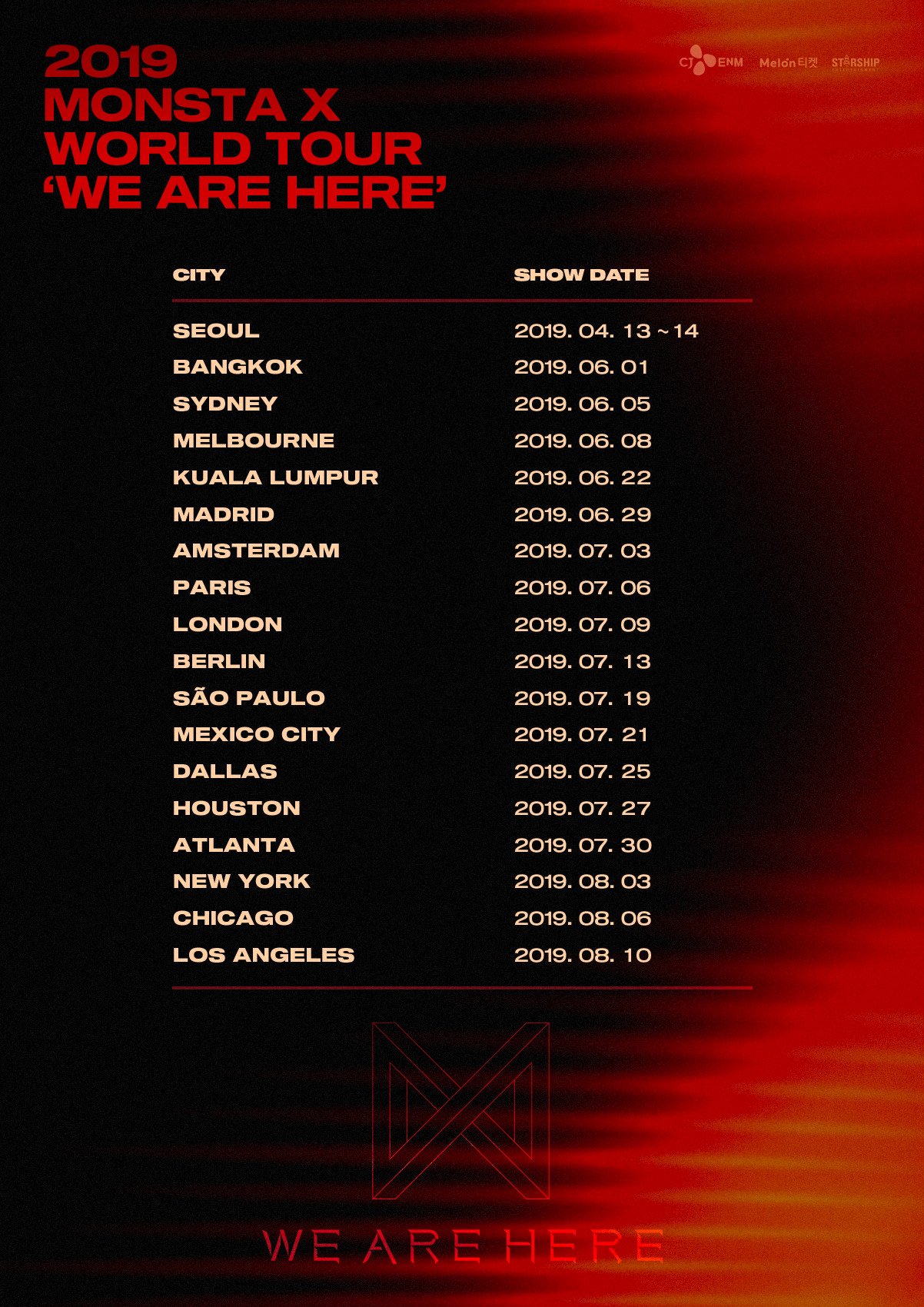 LOOΠΔ’S [ X X ]: An EP Review from a Casual Listener

Zoë is from England, currently living in New York for university studying Magazine Journalism. She is the senior editor for the Arts &Culture site. Zoë is a lover of all music genres, especially alternative R&B, UK Grime and Korean music.