Review: Morrissey's 'I Am Not a Dog on a Chain' is Uninspired, at Best
Advertisement

Lyrically, “Jim Jim Falls” is not a complex track. For a song that serves as the initial track on the album, it’s surprisingly tired. The intro is unlike any other sound on the album, reliant on synthesizers and bass. The song transitions into a more expected sound once the chorus begins, padded by Moz’s vocals. Vocals that are singing, unfortunately, simple lyrics. As a fan of both Morrissey’s solo career and the Smiths, I would expect lyrics more complex than “If you’re gonna sing, then sing/Just don’t talk about it/If you’re gonna live, then live/Don’t talk about it.” The whole song hosts words that can be listened to at face value: there are no touchstone pop culture references, no clever phrases. “Jim Jim Falls” falls flat. Its saving grace, however, is Moz’s stunning baritone—a triumph that stays consistent across the album.

Love Is on Its Way Out

Perhaps the most “controversial” track on the album, “Love Is on Its Way Out” is Morrissey’s message to the masses. “Love is tired, and it’s on its way out,” and “love is broken/and it’s on its way out,” serve as two notable lines from the track’s chorus. The second song on the album is a showcase of the controversies Morrissey has identified in the “headlines” and “grab-lines:” “Did you see the nerve-gassed children crying?/Did you see the sad rich/Hunting down, shooting down elephants and lions?” Moz is attempting to make a point that love is absent from the world because of its tragedies. His vocals, overlayed onto whiny background singers and a poppy melody, come off as demanding and complaining. Moz, in trying to plug his real-world views, sounds gloomy and full of complaint, a sentiment that works against his cause.

Bobby, Don’t You Think They Know?

“Bobby, Don’t You Think They Know” is the album’s leading single. Motown powerhouse Thelma Houston joins Morrissey on backup vocals, providing a soulful quality to a surprisingly catchy Moz track. Houston and Morrissey work well together, their harmonies elevating the song and creating a compelling soundscape. Additionally, “Bobby, Don’t You Think They Know?” works well instrumentally. The song varies in intensity, allowing each singer’s vocals to shine at different moments. The leveled riffs the song features, as well as a sultry saxophone, round off the track as a notable one.

I Am Not a Dog on a Chain

“I Am Not a Dog on a Chain” exposes Moz’s central theme to a fault. He paints himself as a savior at parts: “I raise my voice, I have no choice.” Alternatively, he embraces and accepts that he is unpopular in the public eye: “I see no point in being nice.” Morrissey laments that he is the defender of the unpopular, the only man who can take a stand against injustice. The picture of Moz as portrayed through “I Am Not a Dog on a Chain” is one that rejects help. This message comes contrary to other songs later on the album, such as “The Secret of Music,” which pins Moz as a man out of touch. “I Am Not a Dog on a Chain” lies in the crosshairs of the identity Morrissey is trying to develop: he cannot decide if he is relevant or not and to compensate, he’s controversial. 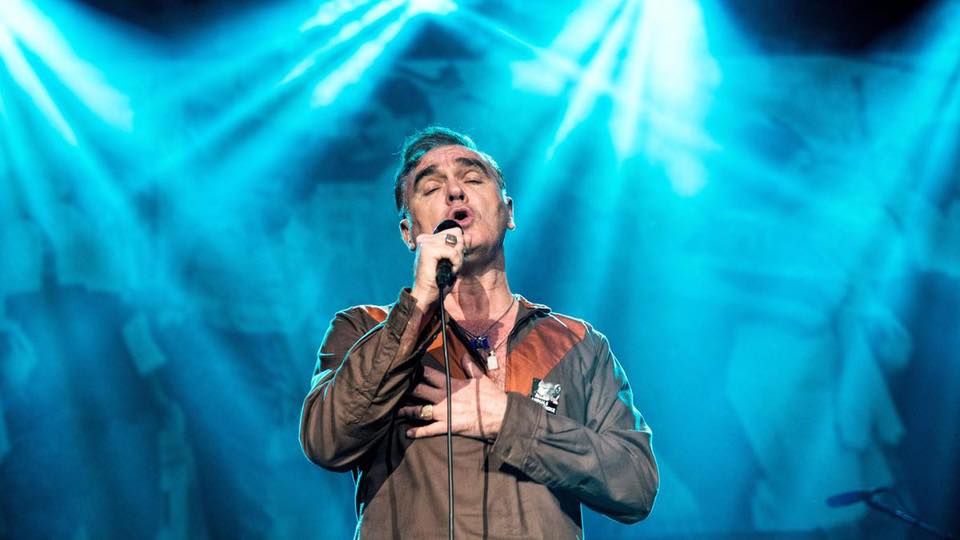 What Kind of People Live in These Houses?

Though the vocals are consistently stunning, this track is one of my least favorite on the album. “What Kind of People Live in These Houses” is entirely all too simple. “What kind of people live in these houses?/T-shirts or blouses?/Torn jeans or proper trousers?” is a hook Morrissey repeats through his verses too frequently. Not only do the lyrics make little sense, but they’re also not alone in their simplicity. The entire track feels like its lyrics are fluff. “And where will they be/Ten years from today?/Bed-sitter, bed-wetter?/Or penthouse go-getter?” serve as Moz’s descriptions of said people in houses. Perhaps I’m blind to a deeper meaning nestled within this track, but I feel like it’s a waste of Morrissey’s vocal talent and time, considering the lyrics are confusing.

“Knockabout World” serves as another one of the promoted tracks off of I Am Not a Dog on a Chain. Dripping in cynicism, he is patronizing in his delivery, adopting a tough-love approach when advising his listeners on the trials of the world.  “Congratulations/You have survived/Congratulations/You’re still alive,” he croons. Morrissey is going against the grain of something so capitalized in the digital age, while putting his own spin on his message at the song’s end. “And by the way/You’re okay by me/You’re okay by me/With your handsome teeth/You’re okay by me,” Moz says. Sure, he could be recognizing the “Knockabout World” we live in, but he finds a way to place a positive, almost uplifting gauze over the end of the track. Coupling his validating lyrics with his classic broad baritone and a, yet again, stellar instrumental break, Morrissey makes an endearing tune out of a seemingly negative one.

Darling, I Hug a Pillow

I feel confident in saying this is my favorite track on the album. “Darling, I Hug a Pillow,” is the album’s hidden gem. Lyrically, this track is reminiscent of the wit and dark, sexual humor of the Smiths-era Morrissey, providing a familiar sound for longtime listeners. Instrumentals and backing vocals serve to differentiate the track from those of the Smiths’ time, however. Abrasive synths and electronic riffs, as well as repetitively rhythmic trumpets, all create a beautiful sound. “Darling, I Hug a Pillow” is, to me, the best track on the album because of its blending of vocals, witty and charming as well as it’s instrumentals, elegant and varied.

Once I Saw the River Clean

Opposite to “Darling, I Hug a Pillow,” “Once I Saw the River Clean,” has an odd sound. Not bad, necessarily, but spastic, utilizing acoustic and synthetic sounds in unexpected ways. A story is told on “Once I Saw the River Clean,” which is something that can’t be said of many other tracks on I Am Not a Dog on a Chain. Lyrics like “I walked with my grandmother/Along the groan of Talbot Road/In the gardens by the graves” demonstrate the imagery so painfully lacking from many of the other tracks on the album. Moz draws listeners into his twisting tale, making this track an enjoyable one.

The Truth About Ruth

Morrissey’s vocals shine the strongest on “The Truth About Ruth.” The track builds up to a haunting instrumental portion, balancing itself on Morrissey’s swelling belted notes. It’s somber and serpentine, an echoing harpsichord driving the track into its crescendo. “The Truth About Ruth” isn’t necessarily a standout track, but it possesses a melancholic property reminiscent of some of The Smiths’ songs of the same themes. Personally, “The Truth About Ruth” isn’t the first song that I would choose to listen to, but it certainly is one that I can recognize for its vocal and instrumental talent.

The Secret of Music

“I am out of tune,” Morrissey whines. “The Secret of Music” uses descriptions of instruments and their sounds… to victimize Morrissey. With lyrics like “No trombone/Or glockenspiel could ever feel/The way I feel tonight,” Moz comes off as hopelessly lonely. In his dissolving former glory, “The Secret of Music” captures his spiraling sentiment completely.

A redeeming aspect of the penultimate track, however, is its experimental instrumentals. For a song about music, Moz takes liberty with the rhythm of the track and spares no sound. It’s odd, erratic audio that comes as a welcome change so late in the album. One standout moment of the almost 8-minute track is its final sixty seconds. Moz steps away from the vocals to allow various instruments to swell and play. It’s a dramatic ending, with drumbeats interacting with clarinets, synthesizers screaming along with background vocals.

My Hurling Days Are Done

The final track of I Am Not a Dog on a Chain is, in my opinion, the most Morrissey-esque. It still sticks to the themes of the album, solidifying Moz’s standoff against time and relevancy, “Oh, time/No friend of mine.” Where it deviates, however, is in its showcase of Morrissey’s vocals. Yes, he’s lamenting about his race against the unforgiving time. That’s a consistency across the album. However, Moz’s vocal performance on “My Hurling Days Are Done” is easily the strongest. It matters not that his lyrics are repetitive and two-dimensional, but that he pours effortless strength into each word he sings. I’m impressed with “My Hurling Days Are Done” as an ending track because of Moz’s stunning singing. He wraps up I Am Not a Dog on a Chain with ease and vocal flair, a signature Morrissey move.

Morrissey’s new album ‘I AM NOT A DOG ON A CHAIN’ is out now featuring ‘Bobby, Don’t You Think They Know?’ and ‘Knockabout World’ !

I Am Not a Dog on a Chain is Morrissey’s entrance into the 2020s. It’s trite at times but finds redemption in its expert instrumentals and timeless vocals. For Moz, this album is precisely on-brand. I Am Not a Dog on a Chain fits the theme of his public appearance. It makes expected political commentary and reflects on eras long passed. Vocally, Morrissey is still in incredible shape. He hasn’t lost his handle on his powerful, crooning baritone. He has lost his handle on relatability, however. And for a sexagenarian, that’s more than okay! Instead of attempting to adopt an influence he doesn’t have, Morrissey should stick to his wailing love songs and melancholic ballads. They’re where his talent shines best.

Stream I Am Not a Dog on a Chain now, out everywhere!

Album Review: The Weeknd Goes Back To the Future with New Release, ‘After Hours’

Sophia Moore is a 17-year-old writer based in Southern California. She can often be found penning works ranging from dramatic poetry, insightful articles and extravagant short stories about almost every topic imaginable. Beyond the literary world, Sophia enjoys voicing her opinions through debate, discovering new music (or more likely, listening to the same three playlists on repeat), browsing lifestyle and fashion blogs, and taking her dog out on long walks. You can keep up with her on Twitter @scribblersoph.