Exuding raw talent, attitude and sex appeal (aka “the big three”), it’s a wonder these boys haven’t made it big time yet.

I recently sang the praises of my favorite Manchester-based band The Bright Black in my tail-end-of-2017 article Undiscovered UK Artists Who *Need* To Make The Mainstream In 2018. The four-piece absolutely stood out to me due to their (initially) questionable decision to cross-breed the genres of indie and soul, resulting in a hybrid that I feared would either soar to great heights of genius or crash desperately to the ground, never entering the Billboard Hot 100.

That was months ago now though, and I’m happy to report that my initial worries have ceased. Much like the awfully-used analogy of chili and chocolate, the combination of indie and soul isn’t something one would naturally expect to work. But it does. It really does.

I noted that I’d hoped they’d reach the big leagues in the then-distant days of 2018; I thought they had a real shot with their 2017 single “Strike a Pose.” But after listening to their latest track “Midnight” (due to be released on February 16), I’m absolutely, totally, all-guns-blazingly convinced of their potential. The record is a memorable masterpiece from beginning to end, incorporating that winning combo of sultry soul and influential indie from second to upbeat second.

“Midnight” begins with Ryan Flanagan’s impeccably groovy guitar riff, accompanied by Harry Harrison’s toe-tapping drum beat. I made a mental note of the fact that even as I was sat at my desk, attempting to listen to the song as critically and professionally as I could, I deemed it impossible to listen without a few head-bops and shoulder-sways every now and then. Eighteen seconds in, and Travis Yates’ sexy, warm-toned vocals explode in our ears, instantly brightening the darkest of moods. I found that his rhythm-and-bluesy vocals, mixed with the funky instrumental accompaniment seemed incredibly reminiscent of the Jackson 5’s 1978 smash Blame It On The Boogie. A somewhat indie-r version perhaps, but definitely just as iconic!

I shall continue to hope for the boys to hit the big time. The fact that they’ve managed to create something so unforgettably and unapologetically sensational this early in their careers is impressive. In a word: legendary.

“Midnight” will be available on The Bright Black’s Facebook page on February 16th. Tickets are still available for shows on March 15th and April 21st. 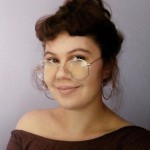