Rivlose is a seventeen year old DJ and producer from Miami. Carlos Rivera has only been making music and performing for a couple years, but he’s already played at several events and parties attended by thousands of people and accumulated an impressive social media following.

Rivlose vividly remembers the moment he decided he wanted to start producing music: at a Hardwell concert. The teen DJ’s eyes seem to momentarily gloss over with nostalgia as he remembered the moment that first sparked his interest in producing and started his career, “I saw that he loved doing his job, he seemed to love everything and I was like, ‘wow, I want to enjoy doing something that much, I want to enjoy doing something like that,’” he says, “I saw myself in the same position and now I’m just working to be at that level.”

Rivera has been a promoter for several music festivals including Life In Color. He hopes to eventually be in the Life in Color lineup soon and at the rate he’s going, it seems possible. The teen is going to be Spinning at Club 380 in Miami for his second summer kickoff of the season. When he’s not behind the deck or hitting the books, he’s producing music– any chance he gets.

“Even when I’m in school, like, say i finish doing my work really quick- I just go at it,” he says, “I’ll be in class and [my friends] would always be like, ‘hey Rivlose, get off the computer!’ because literally every chance I get, I’ll start producing.” For him balancing schoolwork and producing is relatively easy, “as long as you get everything done, you know?”

Rivlose currently has five unreleased tracks but is constantly churning out more. For him, it’s all about getting everything as close to perfect as he can possibly make it. He primarily seeks to genuinely like his own songs “if other people enjoy it, then it’s a big plus.” Still, getting a track to the level he deems worthy is no easy task. He’ll often spend upwards of six hours almost every day on sound design and relates putting a song together, to putting pieces of a puzzle together. He loves every minute of it though and says, “when I’m making a song, everything else in the world just blanks out.”

In the future, Rivera hopes to go to college to study music and sound design. When asked what he saw himself doing in five years, his answer was simple, “the same thing I’m doing right now: music.”

In this article:dj, edm, music, teenagers
Up Next:

Brooklyn White on Her New Release and the Art World 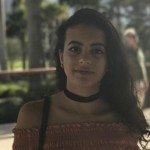 Gaby is an aspiring journalist from Miami, Florida. Find her on instagram: @niceonegab