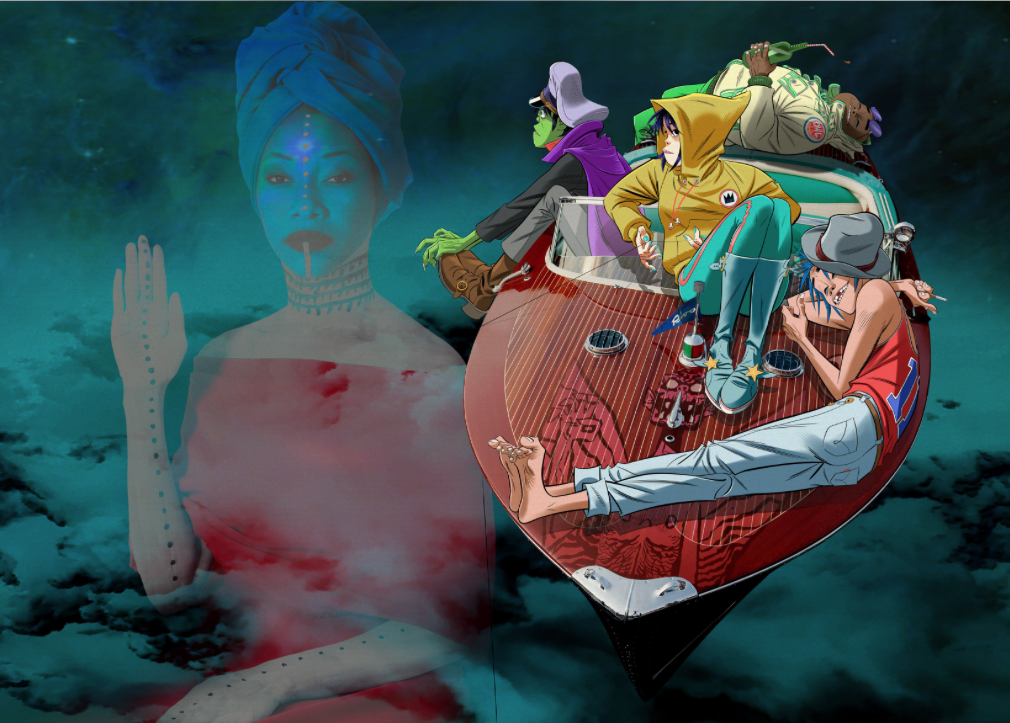 Experimental electronic pop-rock band Gorillaz is back with a new project, and it’s unlike anything the band has done before. Which is saying a lot for a band that prides itself off of being different. So different, in fact, it’s difficult to put them in just one genre!

If you’re unfamiliar, Gorillaz is the literally virtual band created by Damon Albarn (of former Blur fame) and comic book extraordinaire Jamie Hewlett. The two have been working on the concept and releasing music since 1998 with hits like “Clint Eastwood,” “Feel Good Inc.” and more recently, “Saturnz Barz” and “Humility.”

Because Gorillaz is a virtual band, Albarn and Hewlett aren’t the stars of the show. Instead, the animated Murdoc, 2-D, Noodle and Russel are the ones in the spotlight. A whole musical universe has been created by Albarn and Hewlett, providing fans with a story to follow as each new album is released.

Gorillaz’s “Song Machine” is the series through which the band is releasing new songs and interview snippets (stylized, “Machine Bitez”) sporadically, culminating into what fans hope will be the group’s next album. In tandem with the music and interviews, music videos featuring the characters interacting with the humans of the group have been released as well, giving fans a plethora of content to pick apart. So far, only one other song, “Momentary Bliss,” and 5 Bitez have been released.

The concept behind the new project is simple: Gorillaz wants to change up the game. The Song Machine is an attempt to ditch the traditional method of releasing singles and a subsequent album. To quote Russel, “Song Machine is a whole new way of doing what we do. Gorillaz breaking the mould ‘cos the mould got old… Song Machine feeds on the unknown, runs on pure chaos.”

The Machine has been switched on 🔛
Follow your nearest Song Machine (snooze you lose)
👉 https://t.co/LxIgC7zkVH pic.twitter.com/q1vNAhqQSn

No Apologies for Animated Hijinks

February 27th saw the introduction of the Machine’s second song, “Désolé” (French for “sorry”), a collaboration with Malian singer-songwriter Fatoumata Diawara. The song, which premiered on YouTube at 4 pm GMT, kicks off with a funky drumbeat and bassline, punctured with exclamations from Diawara.

“Désolé/Désolé Contrebande/Désolé, I’m a long way from land,” begins 2-D (voiced by Albarn). “Désolé/I don’t know what to do/Désolé, Désolé/Trying to hold on to you.”

The repetitive nature of the word “désolé” gives the song a familiar rhythm to come back to, a hook to sing in your head long past the first listen. The word repeats as such throughout the song, lending itself to many fan theories about the song’s meaning, the most popular of which revolves around band member Murdoc—and that the song is an apology to him.

The chorus features Diawara’s rich vocals, showing off her range. The music swells around her vocals, while 2-D provides background “désolés,” keeping the repeating cadence of the song. Diawara’s hook, “I’m gonna have my lamé,” rounds out the chorus with frivolous flair, carrying the song back into a verse similar to the first, and a chorus identical just after.

An instrumental break facilitates the song to its break down and closing, adding a feeling of variety to the second half of the track. Relying heavily on strings and horns, the ending minute of the song takes on a higher level of intensity than the first, using Diawara’s expansive vocals and repeating “désolé” like a prayer.

How “Désolé” is “Breaking the Mould”

The beauty of the new Gorillaz track is the collaborative aspect of it–specifically how it runs with Diawara’s vocal capacity. Gorillaz is no stranger to artist collaborations: almost the entirety of their fifth studio album was collaboration based. “Désolé’s” collaboration, however, gives Diawara the room she deserves vocally while equally showcasing the well-loved sound of 2-D. In many ways, I think “Désolé” is Diawara’s song. Her range and ability to create riffs out of words familiar to the sphere of the song is phenomenal. Diawara creates a masterpiece out of a song that wouldn’t have stood out otherwise, reaffirming the fact that Gorillaz is a band best shared.

In their beautiful collaboration with Diawara, Gorillaz has continued to expand the unpredictability of their band. With their ever-changing sound, combination of English and French lyrics and Diawara’s hauntingly beautiful riffs, “Désolé” is exactly the brand of fresh, predictable unpredictability that Gorillaz is so good at delivering.

Stream “Désolé” everywhere, and follow your nearest Song Machine to catch all the latest releases!

In this article:Electronic music, experimental music, gorillaz, music
Up Next:

Rihanna’s Navy and the Problem With Entitlement In Music