Shane Dawson and Jeffree Star: What Makes This Duo So Dynamic?
Advertisement

Editor’s Note (June 30 2020): In light of recent events surrounding Shane Dawson and Jeffree Star, I’d like to clarify that my opinions of these two have changed dramatically since the publication of this article. Their behavior does not embody the core values of Affinity Magazine, and they aren’t representative of our convictions as a platform that recognizes the importance of social justice.

In one of my previous articles, “Here’s Why The Try Guys Are Some of the Fastest Growing Influencers on Youtube,” I examined the characteristics of four prominent figures on YouTube, and how we as an audience gravitate towards people like them. In a world where our behavior and identity are so closely reflected in the trends and happenings of social media, celebrities often serve as an indicator of our cultural values, whether it be negative or positive.

Now, in the classic boom-and-bust nature of Youtube and social media, it’s Shane Dawson’s and Jeffree Star’s turn in the spot light — while their dual notoriety has been amping up ever since Shane Dawson released his docu-series on Jeffree Star, an intimate exploration of a controversial beauty guru that captivated its viewers, their popularity is ever-climbing. Currently, Shane Dawson is in the midst of releasing a slew of pre-recorded videos that catalog his journey into the beauty industry under the aegis of Jeffree Star and his company. Fans obsessively await each new upload, with each part of the series achieving millions of views in the double-digits and gaining supremacy on the trending page. This is a phenomenon unheard of for a single influencer, which merits serious consideration on both the material of the documentaries and the relationship between the two.

At first glance, the differences between them seem to be polarizing: Personality-wise, Dawson is known for his self-deprecating humor, and even uses a pig as his brand, demonstrating his tendencies to transform his insecurities into something comedic. He’s widely known for his grimace-inducing jokes, especially those in the past that crossed boundaries and occasionally land him into trouble with the media. Yet, despite his searing judgement of himself, he often exhibits great empathy towards others — even those harshly rebuked by the public such as Jake Paul and his brother — and is fearful of igniting controversy.

In his documentaries, footage reveals Dawson as deeply uncertain and sensitive about the implications of his actions, belying the crass forefront he establishes, and he hesitates more as a situation intensifies. Despite having done YouTube for over ten years, these moments of vulnerability showcase his naïvety in wanting to please others and prevent conflict. This inexperience is highlighted dramatically in his recent docu-series, where, in navigating the business world, he finds themself in one of the most nerve-wracking environments a person can be in today.

On the other hand, Jeffree Star is the foil to Shane Dawson’s character, audacious where he is humble, and glamorous where he is modest. Known for his brutal honesty, fans are drawn to his no-nonsense and straightforward makeup reviews, at a time where information is too often filtered or skewed. A self-made entrepreneur, Jeffree is known for flaunting his wealth in iconic gestures and reveals, and he revels shamelessly in the lifestyle he’s crafted for himself.

Yet, at a closer inspection, Jeffree Star and Shane Dawson harbor a number of similarities — for instance, both sport a controversial reputation, whether it be inserting themselves into other people’s drama or making a vulgar joke that didn’t quite hit the mark. Because of this, neither of them flinch in  gut-wrenching discussions about personal issues. Both have been viscerally candid with their past, and the obstacles that they surmounted in order to achieve the success they have today, and both began as the underdogs before climbing to the top.

On a lighter note, Shane Dawson and Jeffree Star also share similar humor, adding on to the deep understanding between them. Moreover, even in their content, one can find parallels that reflect their ethos on YouTube: Just as Jeffree Star strives to disseminate his honest thoughts from his channel regarding makeup products, so has Dawson attempted to shine an impartial light on his documentaries and make concessions for both perspectives.

All these aspects illustrate the professional, almost journalistic, beliefs underlying their outlandish personalities, which are becoming more and more apparent with their current docu-series. By stepping into Jeffree Star’s world, the docu-series emphasizes the polarizing differences between them in terms of personality and experience, while also capturing how their similarities unite them — a craving for meaning and progress that can resonate with everyone. Along with this fascinating dynamic between the YouTubers, which is still infused with Star’s snark and Dawson’s sarcasm, we as viewers get a tantalizing view into a part of the beauty industry that has been shielded from us for so long. Instead of the usual, theatrical content that fuels drama channels, Dawson delves into the nitty-gritty going-ons behind the curtain, and his reactions throughout the process go hand-in-hand with our stunned thoughts. 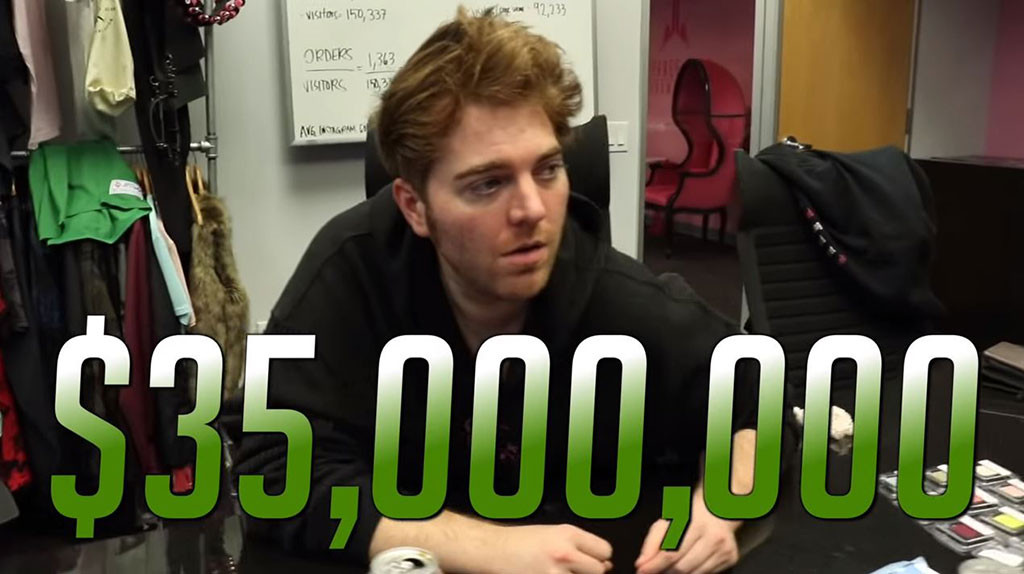 Prediction of retail from the first day of selling Shane Dawson’s collab with Jeffree Star. Courtesy of Shane Dawson

As I mentioned before, the trends of social media are emblematic of our own values and traits, and society is constantly influencing those we track on the media. Character wise, Jeffree Star and Shane Dawson represent the duality and complexities of humans. We are or have the potential to be the embodiment of both personalities, with glamour and self-deprecation or confidence and insecurity. Jeffree Star is a symbol of what we strive towards, giving us determination and idealism whenever we watch him, and Shane Dawson is a reminder of our potential, instilling hope within those who aspire towards higher things. As a result, their interactions as a cohesive team become uplifting and inspiring, without becoming grandiose or unrealistic.

The inundation of views that occur the minute Shane Dawson uploads a new video is also telling indication of what we as a society hunger for: Meaningful relationships, relevant content and more transparency. No matter how juicy a conflict might be on YouTube, the storm passes quickly within a couple weeks, easily replaced by another, and we tend to regress back to our normal states before being shoved into another scandal. With Shane Dawson and Jeffree Star, however, the consistency of their success spanning months demonstrates their audience’s true interest in their work, contradicting those who argue that the public is infatuated with drama. When push comes to shove, most of us yearn to to watch something fulfilling, and this docu-series provides that.

In this article:culture, diversity, entertainment, struggles, youtube
Up Next:

@EmoBlackThot on Twitter Has Finally Revealed Themself to the World

Phyllis Feng is an Ohio-based writer who loves venturing into a diverse array of topics, from literature and music to mental health. She always seeks to emphasize honesty and empathy in her work. In her free time, you'll usually find her with a book and a mug of tea in her hands.