Sofia Kenin Doesn’t Need Other People’s Hype. By Winning the Australian Open, She’s Made Her Own.
Advertisement

Adidas Steps Up Its Game in its "She Breaks Barriers" Campaign

A young American pushing herself into tennis headlines and making waves — does it sound familiar?

She’s not Coco Gauff, as you may be thinking — she’s Sofia “Sonya” Kenin. 21-year-old Kenin fought her way to her maiden Grand Slam title at the Australian Open this Saturday. She beat out Garbiñe Muguruza, a two-time Grand Slam champion and former world No. 1, in the final, 4-6 6-2 6-2.

She’s the youngest American since Serena Williams in 2002 to win a major.

Kenin hasn’t received the media hype of her other peers, but her rise has been a long time coming. She started 2019 ranked 56 in the world and ended it as number 14, winning three small-level singles titles.

More than that, though, Kenin’s 2019 was marked by her wins.

She was the one who beat Serena Williams at the French Open. She was the only one to beat Bianca Andreescu, the 2019 US Open champion, in a completed match from February to October. She beat Ash Barty at the Rogers Cup and then Naomi Osaka in Cincinnati the next week, both of whom were number 1 at the time.

To cap it all off, Sofia Kenin was awarded WTA Most Improved Player of the Year at the end of 2019.

So why was she not talked about?

Kenin has been known in the tennis world for a long time. These videos of her as a child prove it: one where she confidently states that she can return Andy Roddick’s serve, and the other depicting Kim Clijsters leading her around the Australian Open.

Now we know she can return @andyroddick's serve AND beat the great Serena Williams in a Grand Slam.

Even without the hype, though, Kenin’s made her own spotlight. Her mannerisms are far different than any other player’s. When serving, Kenin doesn’t look at the ball and hit it the same way that other players do; instead, she waits until the last possible moment to look at and hit her serve.

Her attitude, to some, is a breath of fresh air. She’s constantly yelling on the court, but to herself, not her opponent. She’s frustrated, angry, aggressive. It’s the kind of antagonism that brings some blood to the sport— but without being hurtful to the person on the other side of the net.

Kenin’s mental strength is one of the strongest parts of her game. In the third and deciding set, she was serving at 2-2, 0-40, attempting to hold back Muguruza’s surge. “I can remember that game very well, yes,” she said, “That’s the game I feel like I changed things… I knew I had to take my chance; I had to be brave playing a two-time Grand Slam champion. I knew I needed to come up with the best shot, five best shots of my life. I mean, let’s go!”

Kenin characterizes herself as a fighter, and there is no apter description.

There was more to the Australian Open than Sofia Kenin, though. The woman she defeated in the final, Garbiñe Muguruza, was having a resurgent tournament of her own. Muguruza, who won the French Open in 2016 and Wimbledon in 2017, entered the Australian Open unseeded and having lost seven out of eight of her last matches.

In the first round, she was bagelled by American Shelby Rogers, and many would have written her off there, based on her prior form. But Muguruza scraped her way back and won the match, and from there, went on to win five more in a row.

She achieved three top-10 wins this tournament, which equals the amount that she had won in her entire 2019 season.

Muguruza, when asked about her slump, said, “I think I’m in a good process. I think I felt my game much better than before. I think I got to keep it that way, keep working physically. These events are really long, so you got to be strong.”

The woman that Kenin beat in the semifinals, Ash Barty (world No. 1), had received a lot of attention coming into the tournament. Though Barty did not win a trophy on home soil, her progress was still uplifting for many Australians. According to No Challenges Remaining, she has made it the farthest of any Australian since Lleyton Hewitt made the final in 2005.

Additionally, the podcast says, since the tournament moved to Melbourne Park in 1988, no Australian player, male or female, had made it to more than one singles final. With her fourth-round win over Alison Riske, Ash Barty broke this unlucky streak.

Another story that became overshadowed during the Australian Open was Caroline Wozniacki’s retirement. The former world No. 1 and 2018 Australian Open Champion was on the ropes against Dayana Yastremska in the second round before she managed to stage a comeback and win the match.

So instead, Wozniacki’s final match was against Ons Jabeur, a Tunisian tennis player, who beat her 7-5, 3-6, 7-5. Amid tears, Wozniacki said, “I think it was only fitting that my last match would be a three-setter —  a grinder and that I would finish my career with a forehand error.”

The tribute that followed on Melbourne Arena was touching. “It was a packed stadium,” Wozniacki described, “People stood up. There was ‘Sweet Caroline’ through the microphones. People were clapping. I had the Danish flag at my back; I had my family there… I had people closest to me [who] were all here, or watching on TV and supporting me… I don’t think I could have scripted it any better. I think it was the perfect moment.”

Coco Gauff dominated the headlines during the first week of the tournament, especially with her defeat of defending champion Naomi Osaka. While it is important to remember that Osaka was not playing well at all that day, Gauff’s achievements are impressive, achieving 4R-3R-4R in her Grand Slam debut.

However, take the hype with a grain of salt. Melanie Oudin was heralded in her breakthrough, only to fizzle out. At fourteen, Cici Bellis became the youngest player to win a match at the US Open since Anna Kournikova, would score wins over players like Petra Kvitova and Kiki Bertens, and reach a career-high of No. 35 in the world —  only to be sidelined for almost two years with injury. Bellis actually returned to the court this year, making it to the third round.

Gauff has the promise to be an amazing player, but we will have to wait to see how her future unfolds.

She’s only one example of how American women’s tennis is brimming with talent. This fortnight, though, Kenin is the USA’s star. Her Australian Open win shows this — she may have not received the same media attention that so many other young Americans have gotten, but she’s made her mark on the big stage.

We’ll be seeing her late in tournaments for a long time, no matter how many tough battles she has to scrap herself through to get there. 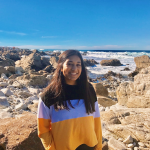