Earlier this week, it was announced that notorious film maker and alleged sexual offender Woody Allen would be filming another movie. During the announcement, the cast of the film was also revealed, including Timothee (Really?) Chalamet, Elle Fanning, and Selena Gomez. We could spend hours talking about the terrible things Woody Allen is accused of, but this is about Selena Gomez, her fans, and the stars and celebrities who continue to work with an alleged sex offender.

After the announcement that Gomez would be starring in the film, “stan Twitter” went wild. There is a definite toxicity in almost every stan community, and Selena’s fans are no different. People who are defending Selena’s decision to work with Allen are mitigating her moral responsibility just because “she’s my fav.” When the news broke, the internet was clearly divided-ish. There were non-fans and fans alike who, thankfully, vehemently disapproved, but they clashed with Gomez’s stans, who almost automatically approve of anything she does. It is not healthy to defend someone when they are in the wrong, just because you like them.

At the end of the day, you don’t have to disavow your love for Selena completely; you can still absolutely stan her, but you must call her out when she is being problematic. It is the same thing when you call out your best friend: you absolutely love them, but they need to know that what they did was wrong.

What you shouldn’t do is continue with preposterous arguments as to why she isn’t “really in the wrong.” The most used “argument” is that she technically isn’t supporting Allen by starring in his film, which is pretty ridiculous as working with Allen and helping him make money is a direct form of support. Others are trying to bring up that “Selena did [insert some noble thing here] though” which is a logical fallacy to think that her previous good works mean that she cannot ever be problematic. It does not take away from the current situation. Selena has done some great things, and you are welcome to keep listening to her music, but please acknowledge not everything she does is perfect, and you must hold her accountable.

Thankfully though, there has only been a cast announcement and the movie has not been scheduled for filming. There is still time for Gomez to back out, to admit her wrong, and move on from the situation.

The Use of Drugs in American Cinema

9 Nazi-Bashing Movies To Brighten Up Your Week 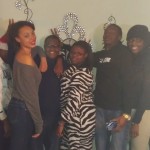 "Into You" by Ariana Grande deserved a Grammy