The Cricket World Cup and the IPL: A Review of Volume 3 Episode 4 of Patriot Act
Advertisement

This week’s episode of Patriot Act with Hasan Minhaj was about something that’s not often discussed, especially in relation to global power- cricket. The popular sport is practiced almost everywhere in the world- it originated in Great Britain and was spread by the imperialistic nation throughout the world. Initially, it was played by unprivileged countries hoping to beat the British at their own game. Now, as the upcoming 2019 Cricket World Cup approaches, fans everywhere are preparing for the match between India and Pakistan. Last time they played each other, over one billion people tuned in. These two countries have played this game both to ease tensions and to inflame them. The rigidity caused by this game goes far beyond these countries, though- in Cuba, Fidel Castro attempted to force citizens to play the game instead of baseball as a “middle finger” to the United States. In China, the government paid for a stadium to be built in Grenada as a way of thanking them for not recognizing Taiwan. Even in Afghanistan, the sport is favored. Asadullah Khan, a former national team player, stated, “Minus cricket, we are nothing.” The Afghan people won’t always participate in elections, but they will in cricket. “Cricket is a global sport with the potential to unite nations,” Minhaj says.

India is stifling the growth of a sport that was originally meant to be about expansion. 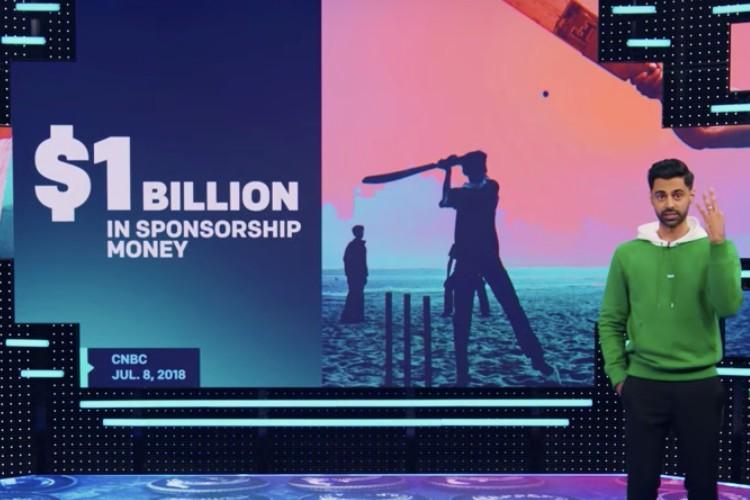 Via The News Minute

In 2019, however, things are changing and cricket might become significantly less extensive because of corruption and greed. Minhaj states that the country most to blame is India, which collects one billion dollars in sponsorship money because of the Indian Premier League (IPL). The IPL makes a version of the game called T20, which is shorter than the normal length of the game. This made cricket culturally popular and made the IPL extremely powerful. “IPL cricket has so many viewers in India, it can sell everything from soda, cars, even condoms, which is not something Indians are known for using,” Minhaj jokes. In all seriousness, sex is starting to make cricket grow. In the last ten years, cheerleaders have been a new addition to Indian cricket games, and it’s both alarmingly sexist and incredibly impactful. A few clips are shown of Indian men reacting to the tightly dressed women, recording them on their cell phones, and stating that cheerleaders are exactly what the game needed, the only problem being that they are distracting from the game (but they’re not complaining). Minhaj doesn’t exactly reflect on how disgusting this behavior is, but he does have to focus on discussing the main topic.

Minhaj and Modi; Image via In

Lalit Kumar Modi was the architect for the changes to Indian cricket, but his reign as IPL leader lasted only two years. He was found guilty of eight counts of misconduct and became an outcast in India. He’s afraid to even go to his home country- he thinks he’ll be killed. Because of this, he met Minhaj in London for an exclusive interview. During this interview, Minhaj admits to Modi his opinion that the former leader is “shady,” and Modi actually thanked him for saying that. His reputation of behaving suspiciously traces all the way back to his time at Duke University, where he was arrested for trafficking cocaine and possessing a weapon with the intent to kill. Modi doesn’t deny these charges, but he doesn’t appear to feel as though he participated in wrongdoing. He recognizes that other people seem to think it was poor judgement, and Minhaj sarcastically says “The haters hate,” which prompted Modi’s totally serious response of “I completely agree”. In addition to having no shame over his college crimes, he also has repeatedly questioned what he’s been accused of in the past few years. During this interview, Minhaj reads a list of the crimes Modi committed right to his face. This man is clearly guilty.

As usual, Patriot Act with Hasan Minhaj was informative. I didn’t find this week’s episode to be particularly comical, as most of them are, but I would absolutely recommend watching. Minhaj selects topics that are not necessarily in the realm of common knowledge, so his show includes a learning experience. I feel that cricket is a topic that is interesting and different. New episodes of Patriot Act with Hasan Minhaj can be accessed every Sunday on Youtube and Netflix.