The Dangers and Complications of Desi Love
Advertisement

Being a Desi and falling in love with those who aren’t from the same region, caste or religion is stressful and heartbreaking.

Love is a wonderful feeling you have for someone and can’t wait to spend your time and life with them. That feeling is a magical moment to be with your significant other, telling them how you feel, spending time, and not being under pressure.

However, being a Desi often complicates that. Desi love is often strained by the fear that family and relatives will find out you are in love with someone out of your region, caste, or religion.

Your love can cause rivalries. It is not just arguments, but heated violence with weapons. Sometimes it reaches the point where the families want to kill their child. Yes, it’s that bad.

Why is falling in love with someone out of your society and religion such a problem?

Often, Desi families can be sheltered and believe that different people and cultures are bad, toxic, and should definitely be avoided.

It’s difficult to explain what one goes through, especially if one is mixed. So I asked Samiah Ali, a 16-year-old girl whose parents are from Pakistan and Nicaragua.

“So, I’m from Pakistan and Nicaragua. It’s pretty cool to be able to say that I’m from multiple countries, especially the ones I’m from because of my cultures and how I talk about them.”

But she continued, “I have received discrimination and I still do. It was pretty bad for me because I went to a school where everyone was full Desi. I was the only half Hispanic female and got a lot of hate, from students, teachers, and parents. It kinda hurt. Actually, it hurt a lot because those who were supposed to take me in and accept me didn’t.”

On the complexities of her mixed identities, Samiah said, “I have to be one or the other; I can’t be both Pakistani and Nicaraguan. When I say I’m Hispanic or talk about my quinceanera, people tell me because I have a Desi last name, I’m a fake Hispanic. And when I’m around Desi people and they see my Hispanic mom, they say I’m a fake Desi.”

Samiah’s background is beautiful. She doesn’t deserve discrimination because she’s not a full-on Desi. No one does. Many mixed desi people like her receive a lot of hate for just being unique and being themselves. Often, the hate is so extreme, death is involved, whether the family tries to kill their own child or tries to kill the child’s lover.

The complications of Desi love are even seen in the entertainment industry.

A Bollywood movie Ishaqzaade portrayed a love story between a Hindu guy and a Muslim girl who are in a family rivalry but still fall in love. The couple ran from their families, met at an abandon train station, got married without letting anyone know and when things got too serious they stayed at a kotha, a courtesan.

Both families, unfortunately, plot to kill their own children. However, overwhelmed with their situation and with their families’ lack of support, the couple ends up taking their own lives. When the movie ends, a message is presented about how many people get killed or take their lives because of similar situations.

This is something that happens every day with Desi love that crosses cultural boundaries.

It’s time for a change. Society must start to accept differences among lovers. We are all different and we should celebrate how beautiful it is when we share those differences. 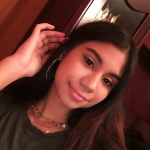 My name is Nabila Ghani, I'm 18 and I'm from Brooklyn, NYC. I was born in America but, I grew up around the Bengali culture so, I got to view both cultures and learned many things about society and life.