Marcos Alberti, a Brazilian photographer, is known for his daring movements in pieces reflecting the problems of our modern society through his artwork. He has been recognized for last year’s “3 Glasses” project, exhibiting the before and after style of documenting drinking alcohol in moderation. His newest project is one set out to break down the restrictive barriers of female sexuality, called the “O Project”.Much like his other more popular projects, the “O Project” creates multiple panels of clean portraits, simple light backgrounds, mid-torso and above, studio lighted. The distinction of this project however, is the subject matter. In this series of photographs, Alberti has set out to capture the faces of women before, during, and after they orgasm. The set of four photos displays the progression of facial changes as each of the 20 women, from all walks of life, reach and recover from the height of their sexual journey. The photos, while being fun, liberating, and sexy, are kept tasteful; everything from the waist down (including the personal massagers used) are kept hidden from camera and photographer. The women chosen for the project span all ethnicities and nationalities, hailing from places that are viewed as more sexually liberal (France) to communities that seem more conservative (China).

The underlying message is that all women deserve to be empowered by their sexuality and their control over it, no matter the sexual climate of their background. This project put the real face of pleasure into the world, not the faces constricted by expectation in pornographic movies created for the consumption of the society that uses them. The faces of sexuality that are made for the public are qualified to fit the enjoyment of each culture, be it the rape culture of the United States, pornography is made for the enjoyment of others, not the empowerment of sexuality. Fan Yang, the Global Brand Manager of Smile Makers, Alberti’s partner in the “O Project” commented, saying “Female sexuality is more often shrouded in shame an secrecy. Our partnership with Marcos allowed us to create this series to upend the social stigma around female sexuality, and encourage the normalization of female pleasure.” Continuing Yang stated that “All the women who modeled were in awe of their photos, especially the final shot where they were glowing and radiant. That final shot, of a strong female grinning into the camera, is exactly what we want people to see. We hope that everyone viewing this project will feel more confident about their bodies and sexuality. All it takes is one small at a time.”

Marcos Alberti, the photographer, also commented: “I love that we were able to speak so frankly with these women about sex and pleasure.  When you approach the taboo topic of sex through the lens of humor, people start to open up and share opinions more freely, which can lead to a monumental change in people’s mentality.”

The Relevance of Film Photography 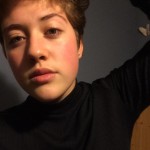 Marlow is a high school sophomore in New England and, among other things, they aspire to be a writer and activist. When NOT with their nose in a book, they can be found eating raw fish, crushing gender roles, making dad jokes, and practicing alternative Wicca. Their Instagram is @m.saucier where they can be easily reached.