The Seven Heavenly Looks From the 2018 Met Gala
Advertisement

Every year, all the big names in the fashion and entertainment industry come together to celebrate the past, present, and future of fashion.

Movie stars, musicians, and models are all invited to the opening of the Metropolitan Museum Costume Institute’s spring opening, and the fashion this year was absolutely divine.

The theme of this year’s Met Gala was “Heavenly Bodies: Fashion and Catholic Imagination”. Therefore, in keeping with the theme, celebrities used their clothing to bridge the gap between fashion and religion. These were the seven heavenly looks from this year’s gala:

Rihanna, who is always a stunner at these galas, was a co-host for the event this year. Riri wore a handcrafted dress, cloak, and mitre and created a vision: Rihanna as the pope. It comes as no surprise that the woman who once donned one of the longest trains ever at the 2015 Met Gala, wouldn’t mess around with her outfit this year. A queen with her music and her style, it only makes sense that Rihanna dress as the leader of the Catholic Church.

While I believe that Lena is the only person on my list not in keeping with the theme, I believe that the Master of None actress had significance behind her attire for the evening.

“This is like my skin, I’m proud to be in it,” Lena said, “I’ve got the community on my back to make sure they know I’ve got them all the time.”

She may not be one of the celebrities connecting religion with fashion but her look is associated with an equal cause.

Madonna’s look was definitely one of the unique one’s tonight. While most donned themselves in white or gold in an attempt to appear angelic, Madonna wore all black with a sheer cross in the center of her upper body. This coupled with the cross crown, cross necklace, and netted veil, the whole look was a true embodiment of the theme.

While Priyanka always looks gorgeous in red, it is truly her jeweled headpiece that was showstopping. The actress wore very delicate headgear and completed her religious look with gold eyeshadow, body glitter, and wavy parted hair. Her look seems simplistic from afar but was definitely angelic by all means.

There weren’t many men tonight in keeping with the theme, but Jared Leto was definitely one of them. Accompanied by Lana Del Ray, Leto wore a blue velvet Gucci suit with a white layer on top and a gold crown. The religious look coupled with Leto’s brown wavy hair was clearly an homage to Jesus himself. While Del Ray was quite stunning herself, I would say Leto outshined her in this picture.

T’Challa on the red carpet isn’t any less impressive. Boseman wore a white Versace and coat. With gold embellishments on his pants and coat combined with his gold shoes, Boseman appeared very royal on the red carpet. The only thing that could have improved his look or this picture would have been the Wakanda pose.

Blake Lively was definitely one of my favorite looks tonight. While her dress wasn’t specifically associated with the theme, the long red train adorned with gold embellishments made Lively look ethereal on the carpet tonight. Blake Lively at the Met Gala is now on my vision board for how I need to look at my senior prom.

What were your favorite looks from tonight? And were there any looks that were over the top?

Gen Z Yellow: Is This What We’re Supposed to Start Wearing? 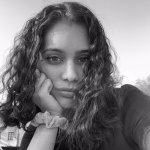