If you are anything like me, you will probably be celebrating Valentine’s Day alone (or with friends). However, you totally don’t have to be single to watch these awesome underrated romantic comedies, so keep on scrolling!

Monte Carlo boasts a star-studded cast including, Selena Gomez as Grace Bennett (the main character) / Cordelia Winthrop Scott (her heiress, and pretty rude, doppelganger), Leighton Meester as Meg (the grouchy stepsister), Katie Cassidy as Emma Perkins (Grace’s waitress best friend), Cory Monteith as Owen (Emma’s love interest), Luke Bracey as Riley (Meg’s love interest), and Pierre Boulanger as Theo (Grace’s love interest). After that long list, one would guess that this movie is a masterpiece. Not quite but I still consider it to be a pretty good film, as far as romantic comedies go. Monte Carlo is about a group of friends’ trip to Paris, which turns out to be pretty terrible. By chance, Grace (Gomez) is mistaken for a spoiled British socialite and she, and her friends, are swept into a world of glamour and romance, while Grace struggles to maintain her double identity. While that description seems basic, the landscape of Paris and Monte Carlo are beautiful and the performances are fantastic.

This French film is amazingly brilliant and the first time I saw it, I bawled my eyes out. Funnily enough, it wasn’t because I was sad but because I was so freaking happy. I could end it right here yet I really have so much to say about this fantastic movie. The story follows a young woman named Amélie, who performs different good deeds that change the lives of those around her. However, she is a little more hesitant when it comes to her own life, specifically her relationships. Amélie is a gorgeously-shot movie with an adorable romance that will make you cry in appreciation for your partner. Or cry just because it’s so good?

One word to describe The Pretty One would definitely be “quirky”. The main character, Laurel, played by Zoe Kazan, is a sheltered girl who assumes her twin’s identity after she dies in a car accident. What follows is a strange and emotional adventure of romance and self-acceptance. And also, who doesn’t love Zoe Kazan and Jake Johnson?!

One of those very self-aware films, Not Another Happy Ending blends real life with fiction (literally) as Tom Duval, (Stanley Weber) a publisher, tries to force his one successful author into writing her next novel. Jane Lockhart (Karen Gillian), the writer, can’t write because she is too happy. This film is adorable and by the way, Stanley Weber is pretty freaking attractive.

The last film on my list is probably the most underrated of all the movies on this list. The story follows a taxi driver, Thom (Steve Jaeger), who drives a patron named Claire (Amber Jaeger) from New York City all the way to California. Steve Jaeger directed and wrote the movie and even better, the couple in the movie are actually married in real life!

Author
Sophie Sebastiani
Sophie Sebastiani is a young person living in the Southern United States who loves creating beautiful things. Photography, design, and writing are just a few of her passions. Promoting activism and providing accurate information in her articles is extremely important to Sophie, who values strong and honest voices above much else. You can find her work on her website (https://goo.gl/T29QLq) and her Instagram (@sophiesebastiani). 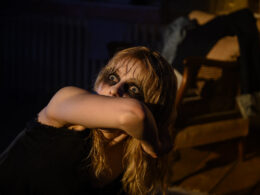