This Majority Black Ensemble, And Africa-Based 'Hamlet' Production Is A Must-See
Advertisement

Meet The Cast of the 'My Fair Lady Revival' Broadway Revival

The Royal Shakespeare Company’s production of Hamlet directed by Simon Godwin and starring Kiri’s Paapa Essiedu (who, according to The Telegraph is the first black actor to be cast by the RSC as Hamlet since 1961) is a must-see. As opposed to the original setting of the claustrophobic castle in Elsinore, Denmark, this version of Hamlet is set in Africa.

The new setting certainly brought a new life to the piece on stage as well as Paapa Essiedu who well and truly made the part his own.

From the beginning, the set and costume design were impressive. There is by no means an absence of bright colors in this production, which juxtapose the often dark themes the play explores. Hamlet (Essiedu) wore a bright powdered suit with a skull drawn upon the back with a crown on its head, complementing the motif of death and power in the play. White painted sheets hung with graffiti upon them. One of the images was a brain, which seemed to ever so subtly illuminate the whole theme of mental health that has often been interpreted from the play of Hamlet.

Of course, Essiedu as Hamlet later graffitied on a portrait of his enemy Claudius (Clarence Smith) and his mother Gertrude (Lorna Brown) in reckless rebellion against his elders and authority (“an old man is twice a child”).

Courtesy of The Stage

Paapa Essiedu’s delivery of the character was sublime. Loyal to the cocky and arrogant nature of the Hamlet, he also made the character his own. Essiedu delivers the cynical — and almost nihilistic — Hamlet in such a way that it breaks up the tragedy, it adds comedy.

For example, Essiedu repeats goodnight to Gertrude (Hamlet’s mother played by Holby City‘s Lorna Brown) straining while dragging the corpse of his lover’s dead father (yes, the one he killed) in such a casual manner off the stage. Essiedu’s delivery of Hamlet in this scene makes one question Hamlet’s guilt in regard to his crime. Will Hamlet kill Claudius if he was capable of killing Polonius in such a casual remorseless way or won’t he? In essence, Essiedu’s conveyance of the character of Hamlet seemed to inject the play with more ambiguity.

Though it was not only Essiedu that gave a grand performance. He was accompanied by a band of great actors and actresses. Mr. Selfridge‘s Mimi Ndiweni played Ophelia in such a way that the character seemed more fresh and developed. The character, when taking orders from her father Polonius (played by Homeland’s Joseph Mydell) and her brother Laertes (Buom Tihngang) often appears weak, particularly when reading the play.

Yet Ndiweni makes the character her own, making Ophelia playful when her brother is instructing her to be aware of Hamlet, laughing along with his jibes and seriousness. This added an extra layer to Ophelia. Staying loyal to the script, of course, Ndiweni gifts flowers to those around her as her madness peaks. Though, in this production Ndiweni rips out parts of her hair. She creates a circle of salt for protection and commands Gertrude to come to her, yet it appears she is unable. Such a unique turn in the production and yet so fitting to add to the mystery and tragedy. 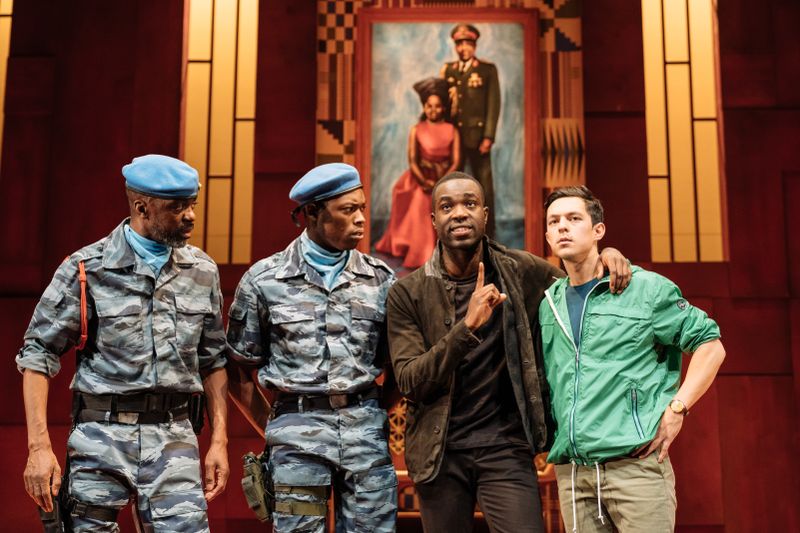 Merit must be given also to Joseph Mydell (Polonius). Mydell added comedy to the character of Polonius with his frank babbling that made his character seem far more loveable than when I read the play. It was also refreshing to see a soldier played by Tracy-Anne Green, a woman.

Above all, the piece has a constant rhythm to it. Perhaps it was the drums that added to the thrill of it. They, without a doubt, complemented the usual use of iambic pentameter. There was a fast pace to the production that kept us guessing as we witnessed the incessant indecisions of Hamlet.

The RSC has put an unforgettable spin on Shakespeare’s Hamlet — and it’s definitely a one to see rather than not.

Meet The Cast of the ‘My Fair Lady Revival’ Broadway Revival